During Levenstein's speech he said he had prevented lectures by “perverts” at the IDF officers Bahad 1 training school on issues of tolerance and respect towards the LGBT community. 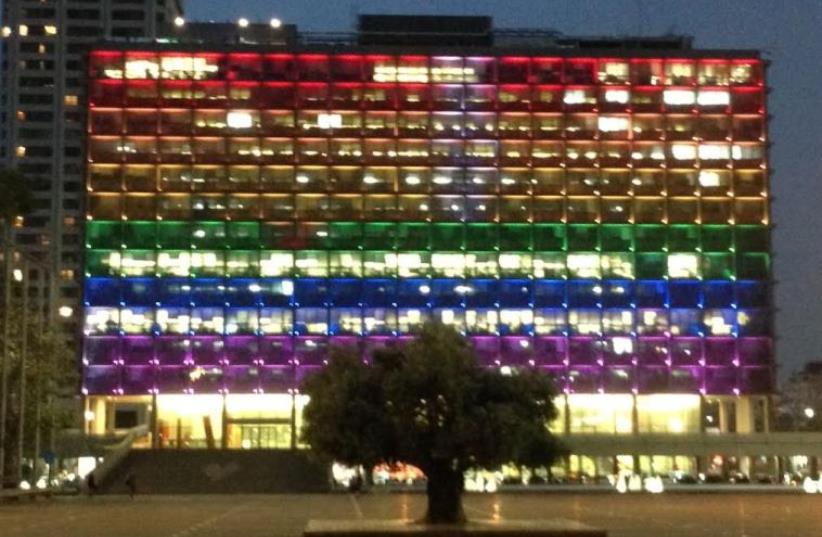 Tel Aviv Municpality building lit up in rainbow colors symbolizing LGBT pride
(photo credit: NIV ELIS)
Advertisement
Maj.-Gen. (res.) Udi Adam, the director-general of the Defense Ministry, has told Rabbi Yigal Levenstein, who described homosexuals as “perverts” last week, that his comments are “unacceptable” to the IDF and the defense establishment.Adam made his comments to Levenstein on Thursday in a meeting with Defense Ministry officials at the Kirya military headquarters in Tel Aviv to which the rabbi was summoned to explain his remarks.Levenstein is head of the premilitary academy in Eli, in the Binyamin region of the West Bank.The director-general has now demanded that Levenstein “clarify his comments” in the coming days.“The director-general of the Defense Ministry said in the meeting that in the ‘spirit of the IDF’ document, which is the ethical code according to which the IDF operates, the value of ‘human dignity is a foundational principle,” the ministry said in a statement to the press.“Every human being is of value which is not conditional on their origins, religion, nationality, sex, status or job,” Adam, told Levenstein, adding that the value of fellowship was another central principle of the IDF and its traditions.“There is no doubt that banishing the LGBT community to exile out of the boundaries of society and the camp contravenes the foundational values of the IDF,” added Adam.Levenstein made his comments last week at a conference of some 700 rabbis and educators from the national-religious sector to deliberate on what organizers described as combating Reform influence in Israeli society.During his speech, Levenstein said he had prevented lectures by “perverts” at the IDF officers Bahad 1 training school on issues of tolerance and respect toward the LGBT community, and also claimed that officer cadets were forced to watch “films on the issue where they present the lifestyle of perverts,” under threat of court marital if they declined to watch it.Following the rabbi’s summons to the meeting with Adam, Bayit Yehudi MK Betzalel Smotrich tweeted that the rabbi should not turn up for the meeting under any circumstances, saying that “the IDFs intervention into the civilian market place of ideas is chutzpah and, critically, endangers democracy.”Premilitary academies are funded by the Education Ministry, and require recognition by, and the cooperation of, the Defense Ministry in order to operate and obtain the one-year military service deferrals from the ministry for students wishing to study at the academy.Levenstein’s comments have caused a furor, with government ministers and senior politicians all speaking out against the rabbi’s comments.Some 300 national-religious rabbis however signed a letter published Wednesday, supporting the right of rabbis to “express their halachic opinions” and ostensibly in support of Levenstein, although he was not mentioned by name.The letter was signed by several senior figures in the national- religious sector including Chief Rabbi of Jerusalem Aryeh Stern, Chief Rabbi of Safed Shmuel Eliyahu, and Chief Rabbi of Petah Tikva Michah Halevy, as well rabbis Elyakim Levanon, Shlomo Aviner and Dov Lior.“The entire Jewish people feels the natural heath of establishing a family in Israel, and despite all the pain for the misfortune of individual people, together with a will to make it easier and to assist anyone who can be helped, when we need to clarify principles it is not possible to give legitimacy to phenomenon and behaviors which raise up on a banner a lifestyle that contravenes human ethics and the pathway of Torah,” reads the letter.“The love toward all Jews and the obligation to respect all people cannot be used to distort the halachic truth or to square circles in relation to forbidden practices. It is the obligation of a rabbi to address halachic or ethical issues in a clear and determined way, and therefore we reject efforts to silence rabbis.”The national-religious lobbying group Ne’emanei Torah Va’Avodah rejected the letter however, and asserted that there was a difference between expressing a halachic opinion and delegitimizing people.“Alongside freedom of opinion, rabbis in particular need to distinguish between [making] a values [based] statement, which can be expressed, and lashing out in a demeaning manner,” the organization said in a statement to the press.NTA said the letter was a result of a “haredification” of national- religious society.