The conspiracy writer, famous for claiming humanity is controlled by space lizards, posed a video in which Walker defends her views that Holocaust Memorial Day should be expanded to include blacks. 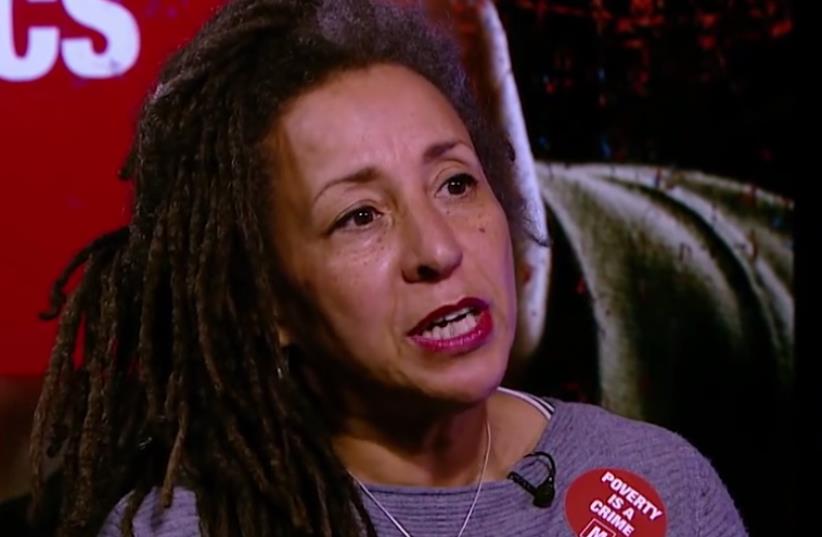 UK Labour member Jackie Walker
(photo credit: SCREENSHOT/ GOINGUNDERGROUNDRT YOUTUBE CHANNEL)
Advertisement
Former Labour party member Jackie Walker received support from an unexpected source on Monday when an article defending her was posted on the website of conspiracy writer David Icke. A picture of Walker was placed on the site with the caption “another thoroughly decent human being falls to Ultra Zionist Witch Hunt.”  “Jewish, Black, Anti-Racist activist – none of this matters,” the caption goes on to say, “criticize Israel apartheid and you’re gone.” The caption ends with the message “the Labour party – Owned by Israel.” Walker was removed from the party in March, after more than three decades of involvement in the party.The cause for her removal were comments she made about Holocaust Memorial Day and what she considers to be antisemitism. Walker, who considers herself Jewish and black, explained in an interview with Marc Steiner for Real News that she thinks Holocaust Memorial Day should be “widened,” believing that “the holocaust that happened to people of color is also unique.” The argument that the loss of human lives experienced by African people during the North Atlantic slave trade and the colonial period is a form of genocide lacks the component of planning and execution by a state needed for that definition to work, as both historical events involved many actors over centuries and evolved without a single purpose. The Holocaust, in contrast, took place in Nazi occupied Europe by the German state against the Jewish people of Europe between 1941 and 1945.  The Rwandan genocide, executed by the Hutu-controlled government of Rwanda against the Tutsi between April and July of 1994, is the only other uncontested genocide the world community accepts as such.       Walker also argued that antisemitism is “hatred of Jews because they are Jews.” She refuses to accept a definition that includes the example of “denying the Jewish people their right to self-determination, e.g., by claiming that the existence of a State of Israel is a racist endeavor” as an example of antisemitism as worded by the International Holocaust Remembrance Alliance.Labour accepted that wording in September, the BBC reported. Walker was careful to note she was not removed from Labour because of antisemitism but because they “got me on something like being offensive.” Icke was a successful sports reporter for BBC until the 1990's, during which he released a series of books in which he explained his views, including conspiracies surrounding The Protocols of the Elders of Zion and that planet Earth is controlled by shape-shifting lizards he calls the "Babylonian Brotherhood."  Icke is well known in the UK for his outlandish ideas.British comic book writer Warren Ellis wrote about him in his 2003 book Bad Signal, saying that he is a man who "constantly braves humiliation and deportation to communicate his message of horror – that we are ruled by things that eat and rape us." The idea had proven so popular it even inspired an Israeli rock band called Nibiru Lizards. The band released a 2016 album called The giant lizards from Nibiru in which they perform such songs as Bad alien and Time of the lizard.