From Paris to Jerusalem, with love 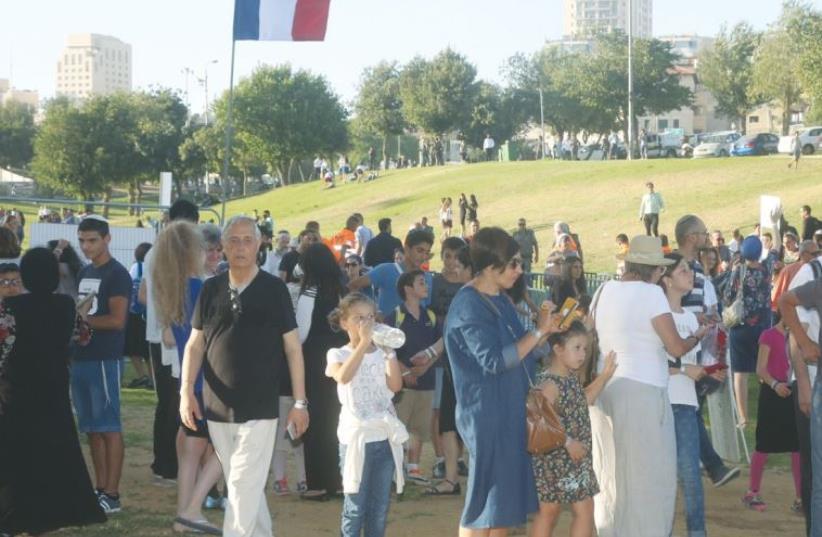 NEWCOMERS, VETERAN IMMIGRANTS and native Israelis party in the capital’s Sacher Park on Thursday.
(photo credit: MARC ISRAEL SELLEM)
Advertisement
In the waning sunlight – and heat – of a Jerusalem summer day, thousands gathered in the capital’s Sacher Park Thursday night for a celebration of French culture.The organizers managed to cram almost a dozen disparate events into one extravagant evening in the heart of Jerusalem, celebrating the wide community of French immigrants in Israel with music, speeches, games, food and even a marathon – of sorts. Titled the Paris- Jerusalem Olympiada, the evening was organized by Qualita – an umbrella organization that promotes French aliya and works to ease the new Israelis’ integration into society – and was free for participants – more than 4,000 of whom turned up.The event was designed “for everyone,” said Marc Eisenberg, the chairman and founder of Qualita. “For newcomers, veteran immigrants and of course for native Israelis.“We have a historic opportunity to absorb 50,000 Jews from France here in Israel,” he noted. “The government must do everything to ensure they have a smooth and efficient immigration experience.”More than 8,000 emigrants from France arrived in 2015, and a survey conducted last year by Étude IFOP found that more than 40 percent of the half-million Jewish community there is considering aliya. The Immigration and Absorption Ministry predicts a record 10,000 will arrive by the end of this year.For the first two hours of the event, the young and old milled around and partook in family-friendly games and activities and French art exhibits, and purchased haute French cuisine – including baguettes, pastries and of course wine. Avi Levy, the Algerian- Moroccan chef who won the second season of Israel’s MasterChef television competitive, was on hand to cook his signature North African cuisine.Ministers and MKs turned up to show their support for the French olim community, including Education Minister Naftali Bennett and MKs Avraham Neguise (Likud), Nurit Koren (Likud) and Michal Biran (Zionist Union).The organizers lit an “Olympic Flame” of sorts in Sacher Park, a week after it was set alight and sent on its way by future emigrants from France at the Great Synagogue in Paris. If that wasn’t enough, the evening also included a 3.5-kilometer run, to symbolize the 3,500 kilometers between Paris and Jerusalem.To top it all off, superstars Amir Haddad (a French-Israeli who represented France at this year’s Eurovision Song Contest), Shirel and Laetitia Larusso performed for the enthralled crowd, as did comedienne Judith Mergui.But to make the event truly European, it had to end with the continental pastime: soccer.Those who made it through the busy evening stuck around to watch live the Euro 2016 quarterfinal match between Portugal and Poland.