Thousands of haredi men from the radical group The Jerusalem Faction took to the streets on Tuesday night to protest recent draft arrests. 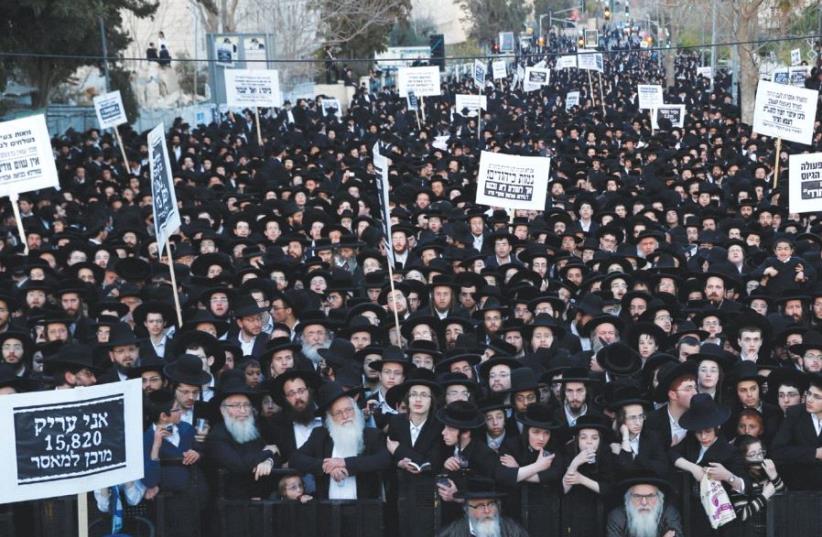 ULTRA-ORTHODOX protesters take part in a demonstration in Jerusalem last night against yeshiva students serving in the army.
(photo credit: REUTERS)
Advertisement
Thousands of haredi men from the extremist Jerusalem Faction and the Eda Haredit communal organization demonstrated in the capital Tuesday night protesting the arrest and detention of yeshiva students associated with the former group.Haredim associated with the Jerusalem Faction have been demonstrating, blocking traffic and rioting for several months due to a series of arrests of yeshiva students connected to the group for failing to report for preliminary IDF processing in order to receive their ongoing deferrals from military service.Most yeshiva students from the haredi mainstream do report for preliminary processing and then receive their yearly service postponement until the age of exemption.
Haredim riots in Ashdod
The Jerusalem Faction, however, has rejected this arrangement since 2012 when a new law was introduced to draft all haredi men, legislation that was repealed by the current government.Although haredi yeshiva students are not currently being drafted, the Jerusalem Faction continues to instruct its yeshiva students not to report for preliminary processing as part of its power struggle with the mainstream community and Rabbi Aharon Leib Shteinman, the rival of Rabbi Shmuel Auerbach, the head of the Jerusalem Faction.The arrests of many of the yeshiva students of late were made during demonstrations for those previously arrested and found to be deserters – that is men who failed to report for preliminary processing.Tuesday night’s protest took place with the permission of and in coordination with the police, and Sarei Israel Boulevard, Strauss Street and Yisha’ayahu Road were all closed to let the demonstration take place and allow for placement of a stage.Several of the leading rabbis of the group addressed the crowd including Auerbach.“It is really the uprooting of what is beloved and holy,” he said.“Things that are the foundational principles of the Torah and of the religion, this is what we have given our lives for throughout the generations.”