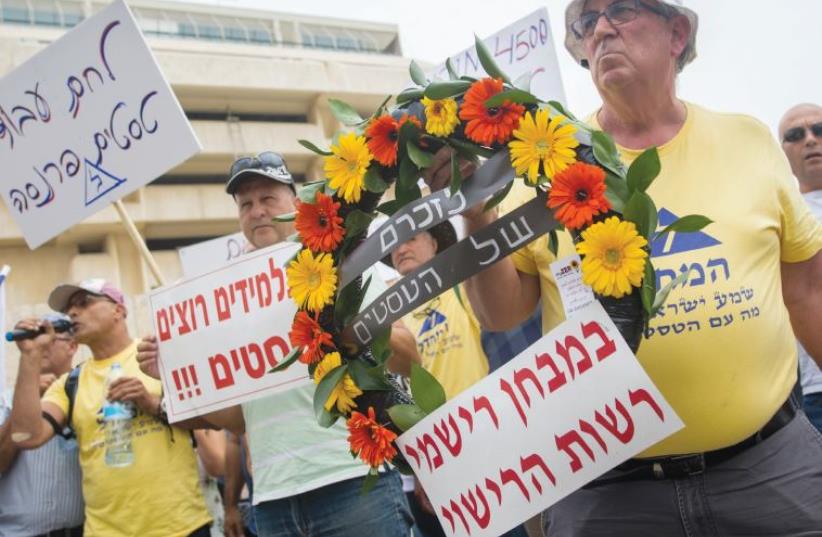 DRIVING TESTERS protest yesterday outside the Transportation Ministry’s Jerusalem office.
(photo credit: YONATAN SINDEL/FLASH 90)
Advertisement
Some 350,000 high school students went on strike Tuesday, shuttering secondary schools across the country.The National Student and Youth Council (NSYC) called the strike in protest of both the cancellation of all extracurricular activities, including field trips, by the Secondary School Teachers Association – which is protesting teachers’ poor working conditions vis-à-vis the Education Ministry – and the strike by the Transportation Ministry driving examiners, which has resulted in the suspension of new drivers license testing since March.On Tuesday, in lieu of attending classes, students went on field trips organized by the NSYC in collaboration with the Society for the Protection of Nature.While students were enjoying nature, NSYC chairman Eliav Batito had some harsh words for Transportation Minister Israel Katz and Teachers Association chairman Ran Erez.“When I read the reaction of the Teachers Association chairman Ran Erez, I understood the extent of his disconnection from the field. He said that because we are part of the Y generation, we are interested in instant gratification. The fact that he thinks we are the Y generation shows how disconnected he is from the field because we are part of the Z generation,” Batito said.He likened Erez’s call for sanctions to “dark regimes ruling in the Middle Ages.”“I was horrified by that fact that he, who is supposed to represent the teachers of the State of Israel who work loyally, chooses to act as someone who represents a group of bullies,” he said.Batito called on Erez to resign as chairman of the teachers’ organization.“If the chairman of the Teachers Association thinks that Israel’s pupils are parasites that need to be rid of after school hours, and he does not understand that the role of the education system does not end at 4 p.m., then it is time for him to put his keys on the table and go home,” he said.The NSYC chairman was also critical of Transportation Minister Katz.“The transportation minister and the people in his ministry revealed terrible negligence regarding the plight of [driver’s license] tests,” he said.“While we warned time after time, Minister Katz decided to be photographed near another traffic junction instead of addressing the plight of driving examiners,” he said.Batito invited representatives of the Transportation Ministry and the driver examiners committee for a meeting at the NSYC’s office in Petah Tikva on Tuesday.“If they are not mature enough to sit down and discuss the issue after a month and a half of sanctions, maybe we will lend a psychologist to make the connection,” he quipped.Erez released a statement ahead of the strike, saying the sanctions were not meant as a measure to harm the students but rather to protest against the Education Ministry.“On the contrary, during this time of year the priority is different – preparation for [matriculation] exams is the focus. We did not want to strike and harm the students’ preparations for exams,” he said.Erez said that while the Education Ministry claims it does not know why the teachers are striking, the reasons are clear.“65,000 members of the Teachers Association know what we are struggling for,” he said citing a list of grievances including salary and pension disputes, as well as the “anarchy” resulting from matriculation reforms.He criticized the Education Ministry as “hiding behind the students” and supporting their strike as a countermeasure to the teachers’ sanctions, adding that this move will backfire in the future and harm the entire education system.