MK Bar: “Establishing one state in ‘Greater Israel’ might be a fantasy for some of us, but what it really means is ending the Zionist enterprise and crushing the idea of the Jewish state.” 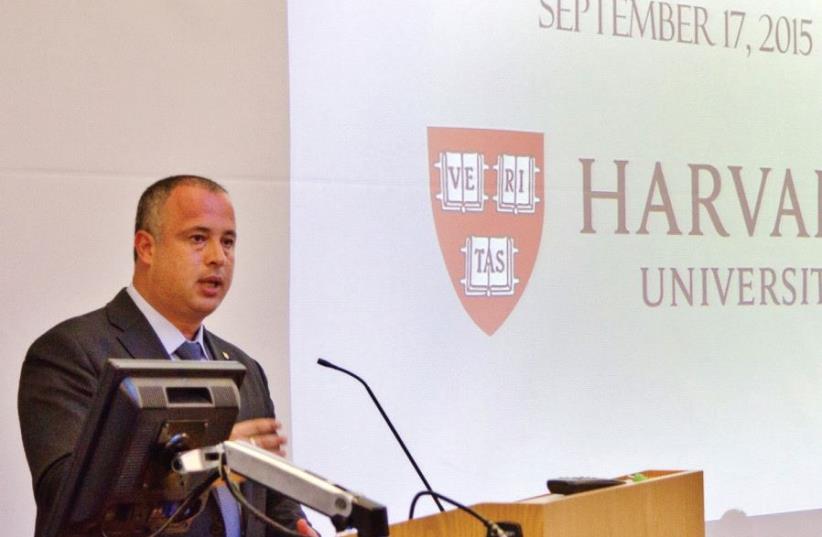 MK Hilik Bar presents his diplomatic plan at Harvard University in Cambridge, Massachusetts, in December 2015
(photo credit: Courtesy)
Advertisement
Deputy Knesset Speaker MK Hilik Bar will present his two-state diplomatic plan to the Center for Middle Eastern Studies at Harvard University on Friday.Bar, who chairs the Knesset’s “Caucus for the Two-State Solution, said that amid the uncertain future of a two-state solution under the Trump administration, it is important to voice a strong Israeli opposition that pushes forward that kind of plan.“The American academy is interested to hear a clear voice supporting a real, viable two state solution,” Bar told The Jerusalem Post. “Although the Palestinian partner is a very problematic one and made endless mistakes, they want to hear someone who isn’t saying that there is no partner, blames the other side and claims that everyone is wrong but Israel.”Bar’s plan is aimed at a conclusive deal that includes neighboring Arab countries and those Arab League countries that are willing to recognize Israel as the national home of the Jewish people next to a sovereign, demilitarized Palestinian state.The plan sees Jerusalem as the Israeli capital and some neighborhoods in east Jerusalem as the Palestinian capital. The “Holy Basin,” which includes the Western Wall and the Temple Mount, would be under joint civil administration and grant free access to both peoples. "In that area, Israel will still have the military control," Bar stresses.Regarding US President Donald Trump’s comments last month at a joint press conference with Prime Minister Benjamin Netanyahu in Washington, Bar’s interpretation was optimistic.“Despite all the commentaries saying the two-state idea is dead, what Trump actually said was ‘one state, two states, the one that both parties like,’ and I believe that the vast majority on both sides wants two states,” he said. “Over 80% of the Israelis support this concept. Only extremists believe in the onestate solution. I have a saying for those people: ‘If you didn’t want [Palestinian Authority President Mahmoud Abbas] Abu Mazen as a partner for peace, you will get him in your government.’” Bar added, “Establishing one state in ‘Greater Israel’ might be a fantasy for some of us, but what it really means is ending the Zionist enterprise and crushing the idea of the Jewish state.”This will not be the first time Bar presents his plan abroad. “Only recently I presented it to the South Korean parliament,” he said. “I also addressed the Japanese parliament, the United Kingdom House of Commons and the European Parliament in Brussels.” Bar has also previously presented his plan at Harvard.“I hope to achieve their support there,” he concluded. “From my many meetings on this issue I have received worldwide support, including from some dominant leaders in the Arab world. I believe that this is what Israel needs now because it is the only possible solution for our region.”