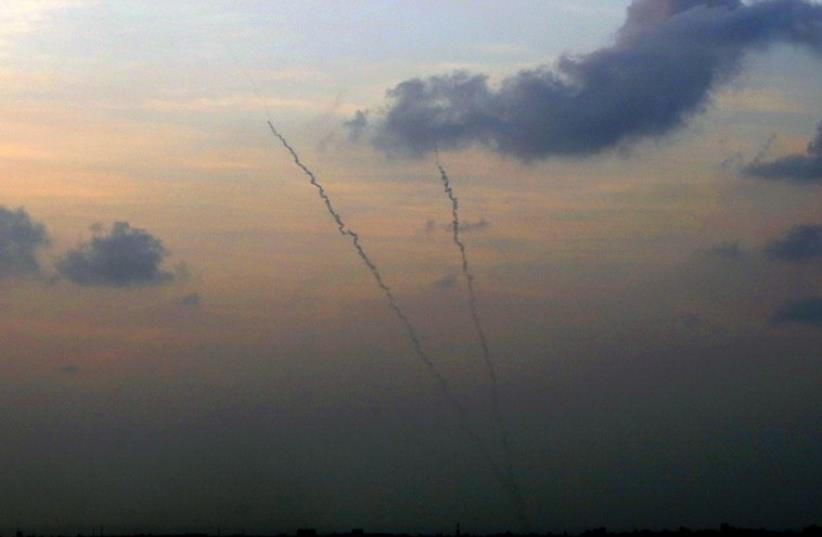 Smoke trails are seen as two rockets are launched from the central Gaza Strip towards Israel
(photo credit: REUTERS)
Advertisement
A nationwide Home Front Command drill simulating conflict on multiple fronts will begin on Sunday, lasting through the week.On Tuesday, air raid sirens will go off across the country at 11:05 a.m. to test school responses to heavy rocket attack, and again at 7:05 p.m. to prompt civilians to seek cover in preselected safe areas.The exercise is not based on any concrete military assessment of a future conflict but is instead aimed at preparing both the civilian sector and offensive military sites for the scenario of unprecedented projectile attacks on Israel.Emergency responders – including police, firefighters and paramedics – will take part, as will government ministries and more than 240 local councils.The Ashdod and Haifa seaports and Ben-Gurion Airport will also take part in the drill.The command plans to involve strategic sites in the exercise, some of which contain hazardous material, though these sites are fortified against attacks.The exercise is part of the command’s goal of preventing Israel’s enemies from inflicting casualties, preventing basic services, disrupting manufacturing and threatening the ability of the IDF to respond to attacks.Hezbollah’s rocket and missile arsenal of over 100,000 projectiles has a higher number of precision-guided, longrange projectiles. Hamas has begun domestic manufacture of rockets in its Gaza weapons factories to replenish stocks following the 50-day conflict with Israel last summer.Command officials will also examine aspects of evacuating civilians from front-line zones, though this does not mean that evacuations are a certainty in any actual conflict.The command will send text messages to civilians during the drill with safety instructions, and will also activate a range of media to test its ability to send out precise guidelines for rocket attacks.