The Prime Minister’s Office had promised the families in December that work would begin on the settlement by last March. 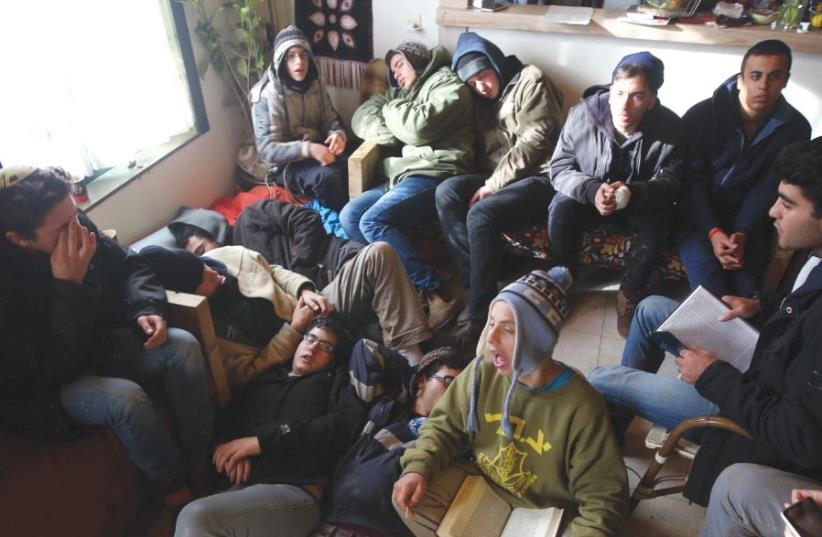 YOUNG PROTESTERS sit in a caravan singing and resting as they wait to be evacuated by police officers from the illegal outpost in Amona.
(photo credit: MARC ISRAEL SELLEM/THE JERUSALEM POST)
Advertisement
Forty families from the evacuated settlement of Amona have threatened to set up an illegal encampment on the site of the new West Bank settlement where their homes are slated to be built, according to Amona spokespeople.On Sunday the Civil Administration authorized the boundaries of the new community, which will be located on state land near the Shiloh settlement in the Binyamin region of the West Bank, Amona spokesman Avibai Boaron said.But the Civil Administration did not agree to fast-track permanent building or sign papers that would allow for modular housing to be legally placed on the site, Boaron said.“"We welcome the decision to set the jurisdiction for the new community, but unfortunately it is too early to rejoice. This decision is yet another stage in a long bureaucratic planning process that can take many years,” Boaron said.
Yael Weiss, former resident of Amona, speaking about her current situation. Credit: Tovah Lazaroff
The Prime Minister’s Office had promised the families in December that work would begin on the settlement by last March.The security cabinet approved the new settlement at the end of March, but the families were forcibly evacuated from their outpost homes near the Ofra settlement at the start of February.Since then many of them have lived in the Ofra field school, with each family receiving one or two dorm rooms.A new school year will start in a few months and no one knows what their future will be, Boaron said.Only a signed military order authorizing temporary housing at the site “can lift us from this distress,” he said.Boaron called on Prime Minister Benjamin Netanyahu to ensure that such a military order was issued. “Only then will we know that the Prime Minister has not broken his agreement with us,” Boaron said.“If nothing happens we will have not choice but to unilaterally uphold the agreement by moving onto the land ourselves,” Boaron said.
MK Tzipi Hotovely speaking about Amona. Credit: Tovah Lazaroff
Earlier his month Deputy Foreign Minster Tzipi Hotovely visited the field school, spoke with the families and called on Netanyahu to take immediate steps to relocate the families to the new settlement.I do not want bureaucracy to stop the important mission of relocating the families, Hotovely said at the time.On Thursday, Knesset Speaker Yuli Edelstein issued the same call when he visited the families. He added that he had “a hard time looking them in the eyes.”