"The missions are growing in number. I set out for this, instead of completing my service and being released from the military," she said. 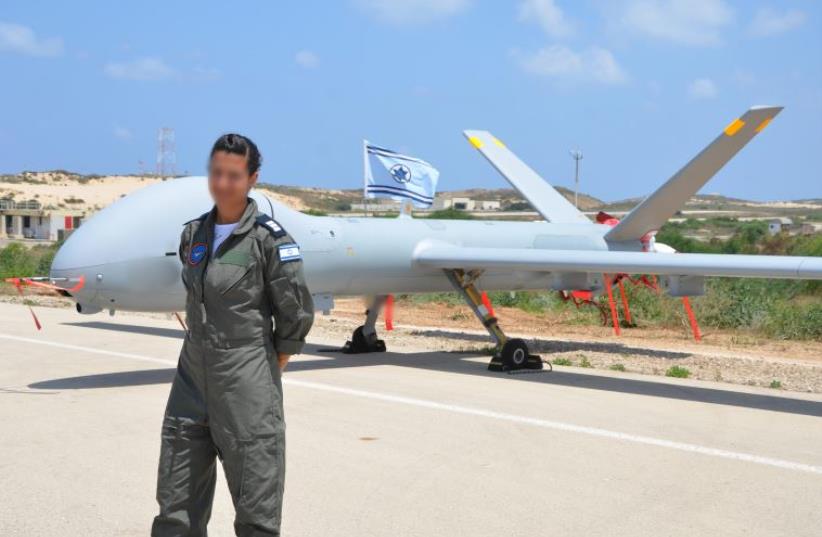 Capt. Gal, who will operate a Hermes 450 drone
(photo credit: IDF SPOKESMAN'S OFFICE)
Advertisement
Dozens of Israel Air Force (IAF) cadets will officially complete their training on Wednesday and receive their wings, becoming the newest generation to defend Israel from the air against a myriad of threats.One of them will be Capt. Gal (full name withheld), who on Wednesday will be one of two female drone operators out of 30 to complete the first phase of their training program.Capt. Gal will operate the Elbit-made Hermes 450 drone, which today plays a vital role in gathering intelligence on enemies like Hamas and Hezbollah, and assisting IDF Ground Forces when needed."I fought to get to this training course," she told The Jerusalem Post on Tuesday. "I came to this place out of an understanding that this world [of drones] is developing, and that technology is moving ahead.The missions are growing in number. I set out for this, instead of completing my service and being released from the military," she said.Over the past six months, Gal said, she and her fellow cadets learned the basics of controlling their platforms, but no less importantly, how to analyze intelligence. "We have to understand the picture we are seeing," she explained. "We get the picture, and in some cases, end users [such as field commanders or Military Intelligence] see them too. In most cases, we also can see images from other planes or drones on the the same mission." Gal acknowledged that after she becomes a fully fledged drone operator, she will have to face frequent "tensions" between her mission duties of providing an intelligence picture to the IDF, and moral dilemmas relating to the need to avoid harming noncombatants. "We will have to get through a lot more training before we reach this moment of truth," she said.Many of her fellow cadets are likely to go on to complete conversion courses in a few years, and fly the Hermes 450's "older brother," the Hermes 900, Gal added.Capt. Gal began her IAF service as a flight simulator instructor in 2008, before becoming an air force flight controller, a demanding job that requires constant and full alertness.Later, after becoming an officer, she served in the flight control tower of Palmahim air base, south of Rishon Lezion, from where the air force controls most of its drone traffic.During the 2014 Gaza conflict, she returned to the flight control tower, this time as its commander.Capt. Gal then set her sights on studying aerodynamic engineering in the civilian world, before her base commander called her for a meeting. He tried to convince her to stay on in the IDF, she recalled.During that conversation, "the idea came to me to become involved in aerodynamics on the operational, rather than the theoretical side," Gal said. She then had to battle a great deal of military bureaucracy before being able to pursue her new goal.Most drone operators are cadets who were unable to complete their pilot training course. "My story is different," Capt. Gal said.Lt. Omer (full name withheld) will soon be flying air force Blackhawk helicopters on search and rescue missions. During his flights, his aircraft will contain members of the 669 rescue unit.Omer completed a three-year training program, which began with 700 would-be cadets trying to get in, and will end on Wednesday with 30 pilots. 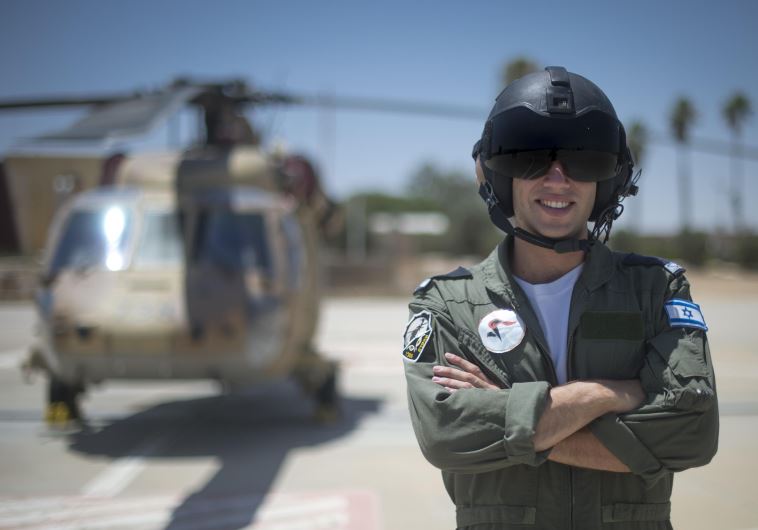 Lt Omer, who will become an IAF Blackhawk helicopter pilot. (photo credit: IDF SPOKESMAN’S UNIT)
"We spent the first year on the ground, doing basic training and undergoing an officer's course," he recounted. Only a few training flights occurred at this time, to ensure that the cadets are cut out for life high up above.In the second year, cadets began training flights for six months, but then, stopped flying, and hit the books, completing a BA and pursuing further academic research. In the third year, the remaining cadets took to their respective aircraft, Omer said. "A year from today, we will become operational, and go on duty shifts," he said.His missions will include transporting infantry units across enemy territory, and rescuing downed pilots. "Since we will have to operate under fire, we are defined as combat pilots in every sense. We are close to the ground, and exposed to RPG and light weapon fire. We have to be able to deal with these threats," Omer said. "We can move large infantry forces around, day or night," he added."We have to be able to reach downed pilots anywhere. These are things we trained for in our course," he said. Blackhawk pilots are also trained to take part in civilian rescue missions, for stranded or wounded travelers in the mountains or deserts.Although he did not have the choice on whether to fly the Blackhawk or another aircraft, Omer said, "I am very happy to be here, because I think the mission we will take part in will be close to the ground, and close to the people we will help."