MK Gafni: Soldiers will not be able to serve. 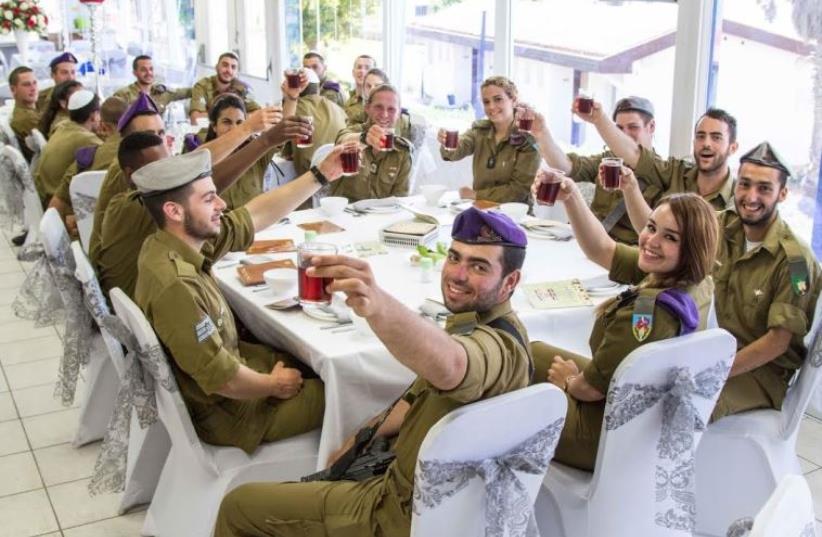 IDF soldiers take part in a Seder
(photo credit: SCALLY PHOTOGRAPHY)
Advertisement
Chief of Staff Lt.-Gen. Gadi Eisenkott defended the new Protocol for Mixed-Gender Service in the IDF from accusations that it infringes on the rights of religious soldiers, saying that religious commanders had expressed satisfaction with its implementation.Eisenkot was speaking on Wednesday in a hearing of the Knesset Foreign Affairs and Defense Committee during which the IDF was strongly criticized by Orthodox and ultra-Orthodox MKs over the issue of mixed-gender service.The Protocol for Mixed-Gender Service was issued last year and led to accusations from conservative elements in the National-Religious sector that requests by religious officers and NCOs not to serve in mixed-gender units would not necessarily be granted, and that religious soldiers would not necessarily be exempted from IDF leisure activities which run contrary to their religious lifestyle.During the hearing, Bayit Yehudi MK Bezalel Smotrich compared the protocol to the positions of US radical feminist Prof. Catharine MacKinnon, saying that he did not want to encounter such positions in the IDF.He opined that the IDF’s previous protocol regarding mixed-gender service, operative since the establishment of the state, was sufficient, and suggested that the new protocol was so bad that the military was “creating a dilemma for a massive community [the National- Religious sector] which serves [in the army].”Haredi MK Moshe Gafni of United Torah Judaism went further, saying that “the general situation in Israel” today is that someone “who is stringent regarding separation between men and women can’t live in this country,” and alleged that the same circumstances exist in the IDF.“This [is a] intolerable situation which the Protocol for Mixed-Gender Service has created, that soldiers will not be able to serve and won’t be able to be officers,” Gafni claimed.Eisenkot dismissed these claims. He noted that the new protocol had been approved by the chief education officer and the IDF chief rabbi, and that it has been well received in the military, including by religious commanders in the field.“It [the protocol] is making waves only outside the army,” said the chief of staff, in reference to the activism of several organizations with anonymous backing and leadership which have sprung up of late to oppose the new guidelines.The Ne’emanei Torah Va’Avodah organization pointed out that the protocol states specifically that religious soldiers must be exempted from activities with members of the opposite sex if they so request, including guard duty, navigation exercises, and traveling in a vehicle with women.The protocol also states that mixed-gender combat units must have tracks for gender separate training and service at the company level for religious soldiers who do not want to serve in the mixed gender track, and that any contrary decision arising from the IDF’s needs requires the approval of the head of the military’s Manpower Directorate.It also states that before being placed in a mixed-gender combat unit, every soldier will be asked if he objects to serving in such a unit on religious grounds.A soldier who objects will either be placed in the unit’s gender-separate track or in a different unit.The protocol states that religious soldiers are able to opt out of any training exercises with members of the opposite sex that will involve physical contact, being alone with them, or activities in which soldiers may be scantily clad.Ne’emanei Torah Va’Avodah accused the organizations campaigning against the protocol of distorting facts regarding the mixed-gender service protocol, saying that they were undermining the concept of the “people’s army.”The organization added however that efforts must be made not to sideline soldiers who request not to serve in mixed-gender units, and not to form “homogeneous” units which would also be in opposition to the IDF’s principles.