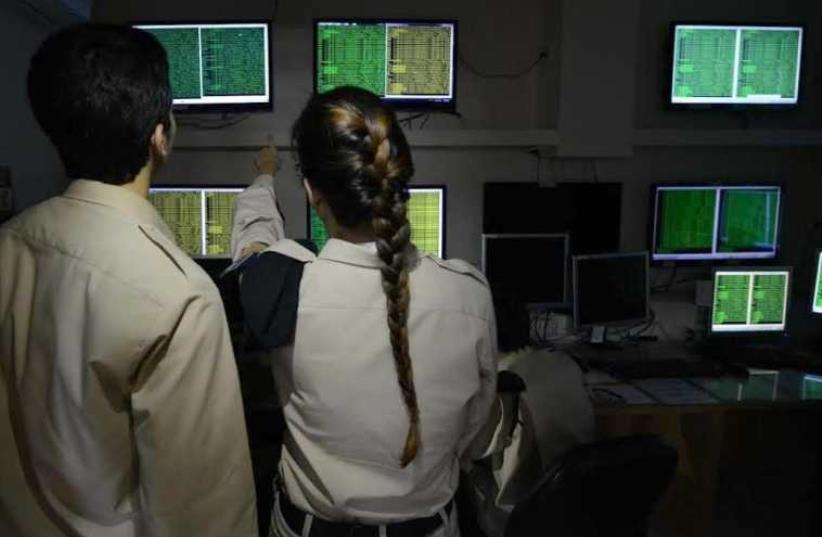 Operators in the Israel Navy cyber control room
(photo credit: IDF SPOKESPERSON'S UNIT)
Advertisement
Jewish youth from the United States who have a background in computers and who want to serve in the IDF have a new program where they will be able to serve in the Computer Service Directorate.The Garin Lotam recruitment program will be similar to the existing Garin Tzabar program, where Jews who immigrate to Israel serve a minimum of two years, and are provided with housing and other support.The army recently launched a marketing campaign aimed at potential Lotam recruits and hopes to hold its first orientation seminars in Los Angeles, New York and Miami in May, where candidates will undergo initial screenings. Those who pass will be brought to Israel for the program.Upon their arrival, participants will participate in a six-month MASA gap year program that will combine courses about Israel with technology courses given by the IDF Computer Service Directorate. They are to enlist by March 2018 and be assigned technological roles based on their capabilities. The army said that the most sought-after assignments are usually in the field of cyber defense, and will be suitable for only the most qualified recruits.While 30 potential recruits will be accepted to the experimental program, if the pilot is successful, it will be expanded.Garin Lotam is being established in conjunction with Big Idea, an international technology summer camp located at the Meir Shfeya Youth Village near Zichron Ya’acov as well as the Nir Ha’emek Youth Village near Afula.Nefesh B’Nefesh and the Immigration and Absorption Ministry are also involved in the program.Many of the participants will be lone soldiers, with no family in Israel to support them.There are currently 2,700 soldiers who came to Israel as part of the Nefesh B’Nefesh Lone Soldier Program, which was created with the “goal of providing assistance and support to new immigrants that are required to serve in the IDF.”During their service, lone soldiers are entitled to additional assistance from the state, including monthly living stipends, discounts on electricity bills, exemption from municipal taxes, rental assistance or lodging provided by the Association for the Wellbeing of Israel’s Soldiers, and extra financial support for combat soldiers.Once they complete their military service, lone soldiers receive a one-time lump sum of NIS 6,000, the option to live for three months in a Beit Hachayal (Soldier’s House) and preparation and financial help to complete their high school matriculation and pre-university psychometric exams.Still, they face daunting challenges, including with red tape. And that has contributed to a significant number leaving Israel once they have finished their service.According to a December report by the Knesset’s Research and Information Center, half of immigrant lone soldiers left Israel immediately after their military service. And of the half who stayed, a third left shortly thereafter.But with skills relevant to the hi-tech sector, these new immigrants might have it a bit easier than most.