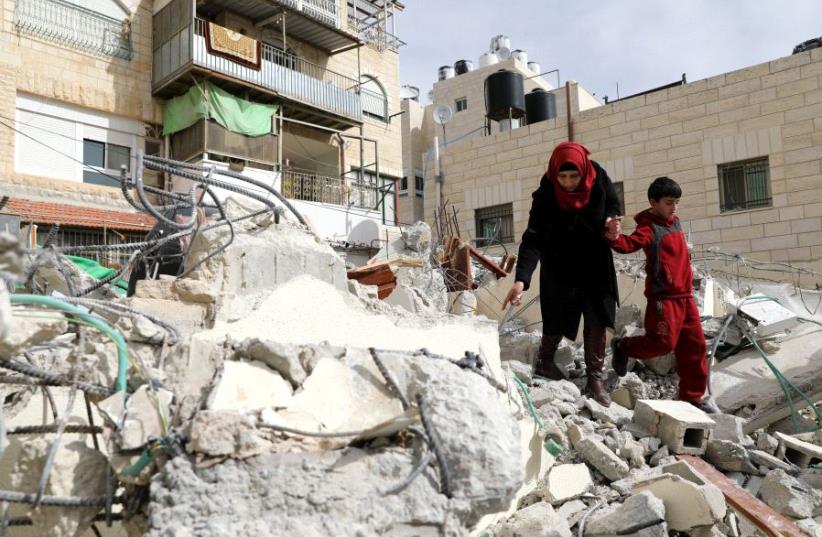 Rubble from a house which was demolished in Jerusalem as they did not have a building permit
(photo credit: REUTERS)
Advertisement
An illegally built residential structure located in the northeastern Jerusalem neighborhood of Isawiya was demolished for the third time since 2002 by Israeli bulldozers early Wednesday morning, displacing three families totaling 30 people.According to witnesses, a municipal demolition crew arrived at 4:30 a.m. with a security detail to raze the two-floor residence, built by Khalid Nimr Mahmoud.All 30 residents, including four children, were evacuated, although multiple reports in Arab media claim they were not permitted to remove their personal belongings and furniture.While Nimr Mahmoud told the Ma’an news agency that a judge at Jerusalem Magistrate’s Court on Tuesday ordered the demolition following multiple postponements granted since the legal battle began in 2002, he claimed no date was provided.Mahmoud said Wednesday’s demolition was the third time the illegal structure has been razed since 2002. He rebuilt the home, which his family shared with the Kastero and Dirbas families, the following year, when it was dismantled once more.Mahmoud added that he is still paying off fines totaling nearly NIS 100,000 imposed by the municipality for the previous two demolitions, as well as court proceedings.Muhammad Abu al-Hummus, a member of a local building committee, said the municipality has repeatedly rejected blueprints presented to it by locals for 15 years.Despite years of litigation, fines and demolitions, Hummus alleged that the demolition was “revenge” for the High Court’s recent decision to evacuate Jewish families from the Amona outpost in the West Bank.The municipality flatly denied the accusation, noting the lengthy legal proceedings and fines issued since the residence was first demolished in 2002.Wednesday’s demolition followed the razing of an illegal Arab family home in northeastern Jerusalem’s Beit Hanina neighborhood last week, displacing seven, including five children.Following the controversial Amona ruling, Jerusalem Mayor Nir Barkat said the court also ruled that 14 other illegally built homes in Beit Hanina are to be demolished.“There is not one law for Jews and another for Arabs,” he said of the order.