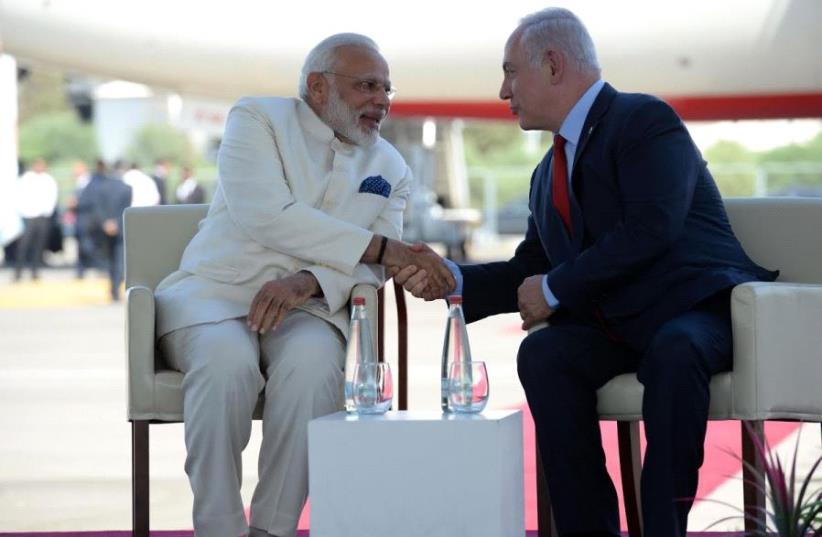 Prime Minister Benjamin Netanyahu greets Indian Prime Minister Narendra Modi upon his arrival in Israel, July 4, 2017
(photo credit: HAIM ZACH/GPO)
Advertisement
Indian Prime Minister Narendra Modi learned a lot from Israel during his visit last week. One project he decided to adopt is a community-based emergency medical service modeled on Israel’s voluntary rescue and first-aid service, United Hatzalah.He invited Hatzalah founder and president Eli Beer to Jerusalem’s King David Hotel where he was staying to hear more about the service. Beer showed how his organization’s model could be used in congested cities, as well as hard-to-reach outlying areas in India.“The meeting was very exciting for me,” said Beer. “We had a meaningful discussion in which I explained our model that has community-based responders who receive proper training and a full complement of medical supplies, enabling them to go out and respond to medical emergencies in their neighborhoods long before an ambulance can arrive on scene.“With the congested streets that are characteristic of many of India’s cities, and large segments of the population who live in areas with difficult terrain, having local volunteer responders in India could save many lives, he explained.”Beer came out of the private meeting pleasantly surprised by the amount of interest that Prime Minister Modi had shown for Israel. “It was clear to see from talking to him just how much of a deep interest Modi had for Israel and how eager he was to build a stronger relationship between the two countries.The prime minister went on at length about how much he was impressed by Israeli innovation. He told Beer that he had been waiting for many years to come to Israel and was happy that he was able to be the first Indian prime minister to visit this country.