21-year-old Ta’alin Abu Hanna, a Christian-Arab and ballet dancer from Nazareth, wins first ever pageant of its kind in Israel.

By BEN HARTMAN
MAY 27, 2016 19:07
Miss Trans Israel 2016
Advertisement
Somewhere in a Haredi neighborhood of Jerusalem in May 1998, a 10-year-old girl opened the newspaper and learned she was no longer alone. Aylin Ben-Zaken saw the news that that Israeli transgender singer Dana International had just won the Eurovision, changing her world forever.“I saw her and I realized that there’s another one like me out there, that I’m not alone.”“Where were you when you heard Dana International won the Eurovision” isn’t a typical question for a beauty pageant contestant, but this was no typical pageant.The first ever “Miss Trans Israel Pageant” packed an auditorium at the Bima National Theater in Tel Aviv on Friday, to mark the beginning of the 2016 Pride Events in Tel Aviv. The winner of the event – 21-year-old Ta’alin Abu Hanna, a Christian Arab from Nazareth, will represent Israel at the Miss TransStar International pageant in Barcelona in September.According to a press release put out by the organizers, the contestants “constitute a true Israeli mosaic. With different backgrounds, communities and faiths, they are an example of courage and tolerance, highlighting the theme of this year's Tel Aviv Pride events: "Women for a Change".”
Miss Trans Israel 2016
The 11 contestants are from across Israel, and include both Jews and Christian and Muslim Arabs, and one Russian-Israeli. Three are from Beersheba, two from Haifa, one from Nazareth, and the rest are from Jerusalem or the Tel Aviv area. According to their bios, most work as dancers or designers, but there is also a telemarketer and a confectioner among their ranks.The winner will receive a $15,000 package of plastic surgery treatments from the Kamol Cosmetic Hospital in Bangkok, including airfare and a hotel stay during recovery.Organizers said that inspiration also came from the story of transgender Canadian model and TV personality Jenna Talackova, who in 2012 won a legal battle to compete in Miss Universe Canada. The Miss Universe organization – and owner Donald Trump – allowed Talackova to compete in the pageant.At the Bima on Friday, it looked a big budget affair, but not over-the-top, with a short swimwear section, two formal wear sections and question and answer portion. The girls surely wanted to win, but the vibe was happy, not cynical and all the personal introduction videos were full of beaming Trans women talking about being happy with themselves, confident, and leaving the closet behind. One contestant, first runner up Elian Nasiel, a 20-year-old Bat Yam makeup artist wearing what looked like some skyscraper Louboutin heels, typified the tone during the question and answer section, when she said her hope for the pageant is that “people will see us, hear us, and understand we’re equal to everyone else.”You can’t talk about Gay Pride Week or gay rights in Israel these days without someone mentioning “Pinkwashing”. The term is a portmanteau meant to describe the way advocates for Israel allegedly try to divert attention from the country’s controversial politics or military actions by touting the gay scene in Tel Aviv and the country’s acceptance of LGBT people. The comparison is typically made between Israel and other countries in the Middle East, where LGBT rights are not on the agenda, or where homosexuality is a crime punishable in some cases by death. The argument is that all this talk about gay rights in Israel; it’s all a diversionary tactic, smoke and mirrors in service of the state.Yisraela Stephani Lev, “The Queen Mother of the Israeli Transgender Community”, aint having none of it.“Listen, there isn’t propaganda here. We live in Tel Aviv, in Israel, the only sane country in the region where people can live as gays or transgender and no one is going to throw them off the rooftop or slaughter them. This is just the reality here. It’s not some sort of brainwashing or pinkwashing or whatever.”The 55-year-old Tel Aviv native is a veteran of the LGBT scene, with 22 years of activism under her designer belt. She says that acceptance in Israel has come a long way in those two decades, though she admits that this assessment applies to Tel Aviv far more than conservative towns in the country’s periphery. 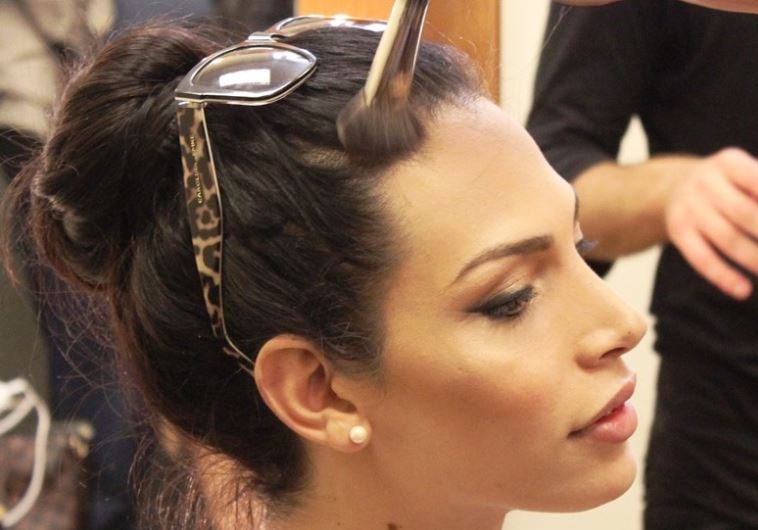 (Miss Trans Israel competition 2016. Photo By: Ben Hartman)Yisraela said the idea of having a Miss Trans Israel pageant had been discussed in the community for years, but that only last year when she set up a page on Facebook did it take flight. She said hundreds of trans women contacted her “from Dan to Eilat, Muslims, Jews, Christians, Beduin”, and that they held three auditions beginning this March to select the final 12 contestants, which include both post and pre-operative trans women. What are they looking for in a contestant? She says it’s not just external beauty, but also “a sort of co-existence and diversity” on the stage that will bring people from every sector of Israeli society together. The beauty pageant contestant talking about world peace is a well-worn cliché, but Yisraela doesn’t hesitate one bit to say “we are looking for co-existence, because this is the beginning of peace.”Asked if they may be supporting narrow classifications of beauty, she said “to look like a woman can mean many different things” and that the most important thing, for a community whose members deal with gender dysphoria, is “to match the inner beauty with the outer beauty. At the end of the day, beauty is in the eye of the beholder.” Well before the night began, Miss Trans Israel winner Ta’alin Abu Hanna already appeared to be a favorite to take the crown. She has the look, the poise, and even the walk of a pageant winner. She also has the confidence of someone who has spent a great deal of time on stage, and has trod a difficult path to get where she is today.Flanked by cameras from the foreign press backstage she spoke in Hebrew about her hopes that the pageant will help bring “more openness towards trans people in Israel and maybe the world. And will help people know who we are.”There was also a tender moment, when she was asked about her family. Her mother – “the love of my life”, supports her and wanted to come, but is abroad at the moment. Her father though, is a different story.“My father doesn’t quite accept me; we’ve had a falling out. I want him to find the courage to love his daughter who is happier than ever.” Speaking directly into the camera she says “I want him to know I’m happy and to be happy for me.”The long path to happiness also often bends towards acceptance, such as in the case of Aylin Ben Zaken, who was crowned Miss Photogenic at the pageant Friday night. Aylin, 27, grew up with three brothers and three sisters in a Haredi household in the Mekor Baruch neighborhood of Jerusalem, where she said she “was always put in a corner.”At 15 she ran away from home and lived on the street in Tel Aviv for two weeks until she found a place to stay. She ended up finishing high school and did her national service helping at-risk youth. Today, 12 years after leaving home, she says she’s accepted fully by her family, which has in recent years also become more secular. Aylin’s hair is straightened and died a sort of honey blonde, and along with her glossy lips she’s got a look that doesn’t quite scream Mekor Baruch. Still, she said that when she goes home for Shabbat she doesn’t try to hide anything about herself, though she does make sure to wear the modest dress expected of women in her old neighborhood. 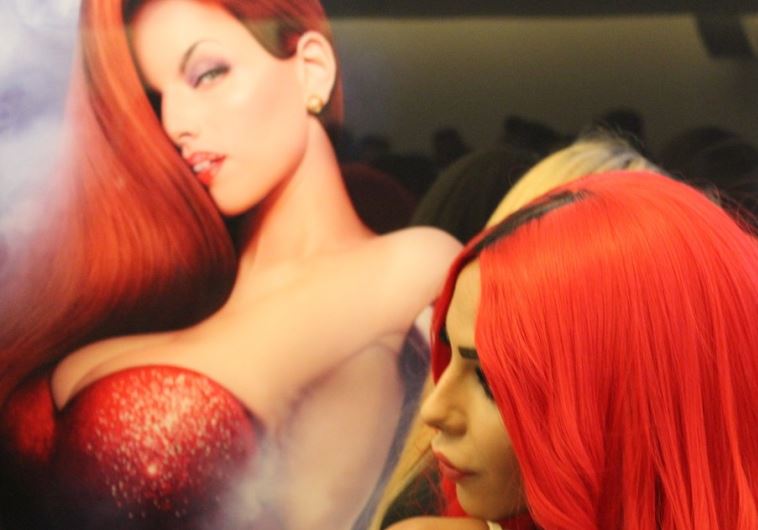 (Miss Trans Israel competition 2016. Photo By: Ben Hartman)She said that in Israel things have become easier in recent years for transgendered people, but that “people still don’t take it too seriously. Straight men see us as a sexual fantasy, not as a woman to take seriously and have a family with. They don’t have the courage yet.”Aylin said she doesn’t believe that the beauty pageant objectifies them as women, or turns them into sex objects, and that when it comes to winning, it’s not everything.“It’s enough for me to look in the mirror and say, wow, I love how I look, I look beautiful.”Less than a week after Hapoel Be’ersheba FC won their first title in 40 years, Almog Yehuda stood backstage mid-day on Friday waiting for her shot to bring another championship to the capital of the Negev.The 24-year-old native of the Ramot neighborhood said for her there was never much confusion, and that from the day she was born she knew that she was a girl. She spoke of how she’d run past the race cars and make a beeline for the Barbies when her father took her to the toy store, and that deep down, “in my soul and my blood”, she knew who she really was.Almog – who said she was too embarrassed to give her birth name –began her transition at age 18, when she received hormones, which were subsidized by the state as part of her health care package. At 20, she flew to Thailand to have gender reconstructive surgery, with the full support of her family.Perhaps it’s counterintuitive for an Israeli family from the periphery, but Almog said her family supported her fully, both financially and emotionally with her transition. She also said that in some ways, Be’ersheba is more liberal than Tel Aviv.“It wasn’t hard for me in Beersheba. Beersheba is a lot more liberal - in Tel Aviv, straight men see you as a gimmick, or a one-night stand fantasy. In Beersheba people see it as more serious, it’s a different population and they treat it with more respect.”Almog is petite with soft features, and lacks the statuesque, runway ready look of some other contestants. To put it differently, she could be any girl in Be’ersheba, and it appears she lacks the killer instinct of a stereotypical pageant winner.“As far as I see it, every girl here has already won. It’s not about the victory; it’s about the adventure, and the path we took to get here.”
Advertisement
Subscribe for our daily newsletter