The law, adopted Monday by the Knesset, bans entry to foreigners who publicly call for boycotting the Jewish state or its settlements. 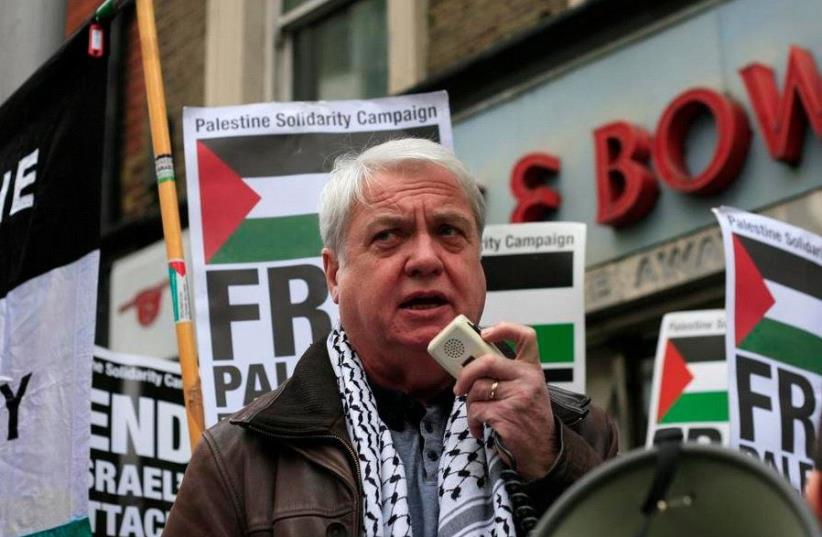 Hugh Lanning
(photo credit: SCREENSHOT FROM TWITTER)
Advertisement
The chairman of the Palestine Solidarity Campaign was denied entry into Israel on Sunday night over alleged efforts to promote boycotts against Israel, according to a joint statement from the Interior Ministry’s Population and Immigration Authority and the Strategic Affairs Ministry.Their statement Sunday night said British national Hugh Lanning was denied entry because: “The organization Mr. Lanning heads is one of the leading anti-Israel delegitimization and BDS organizations in Britain, and one of the largest in Europe.”Sabine Haddad, a spokeswoman for the Interior Ministry, said Lanning arrived in the afternoon, but the decision to deny him entry was only reached at approximately 9:00 p.m.
Bill banning boycotters , anti-Israel activists from visiting Israel becomes a law after Knesset approval on March 6, 2017 (credit: REUTERS/KNESSET CHANNEL)
Lanning has served as chairman of the PSC since 2009 and worked as a head of prominent trade unions in Britain.The statement, from the Population and Immigration Authority and the Ministry of Public Security, cited the PSC’s connections to other British groups critical of Israel and the presence of some of its members on ships that aimed to break Israel’s blockade of Gaza in 2010. It said Lanning had personally met with top Hamas official Ismail Haniyeh in Gaza in 2012. Included with the statement was a picture of Lanning standing for a group photo with Hamas leader Ismail Haniyeh.“Whoever acts against Israel should understand that the rules of the game have changed,” Strategic Affairs Minister Gilad Erdan said Sunday night. “No sane country would allow entry to key boycott activists working to harm the country’s core interests and lead to its isolation.”Interior Minister Arye Deri said: “The decision we made tonight is an unequivocal statement against boycott activists.”A Knesset law passed last week allowing the Interior Ministry to refuse entry to supporters of boycotts is “another step in fully implementing this policy,” he said.Ben Jamal, director of the Palestine Solidarity Campaign, responded to the incident in statement on Monday saying that Lanning is “the first victim” of the new Knesset anti- BDS law and accused Israel of violating “freedoms essential to a democracy – the right to free speech, to criticize government policies and human-rights violations, the right to advocate nonviolent actions to address human rights abuses, the right of free movement and travel.”The Board of Deputies of British Jews released a statement Monday, backing Israel’s decision to bar entry to Lanning.“PSC gives every impression of denying Israel’s right to exist and therefore implies an objective to seek its destruction,” Board of Deputies president Jonathan Arkush stated. “In refusing Mr. Lanning’s entry, Israel has exercised the same power that the United Kingdom has to deny admission where it would be conducive to the public good. If Palestine Solidarity Campaign wants to avoid being treated like a pariah, it has to stop behaving like one.”The Lanning incident comes a week after the Knesset passed a law with the majority of 46 to 28, which allows the Interior Ministry to refuse entry or residency visas to non-Israelis if they have “issued a public call” to boycott Israel – including settlements in the West Bank – or have stated their intention to participate in a boycott. However, it is unclear how a “public call” is defined and the ministry is still determining how the law will be enforced.MK Bezalel Smotrich (Bayit Yehudi), one of the initiators of the new law, echoed his statements from last week and said this move by Israel is making it stronger.Smotrich quoted the Book of Esther and said: “It was turned to the contrary, that the Jews had rule over them that hated them.” He added: “Antisemites that are acting to set foot in Israel and to operate from within; we will continue to do everything that is in our power to protect the State of Israel.”MK Oded Forer (Yisrael Beytenu) praised the move and called out what he sees as hypocrisy by the BDS activists.“I see no reason why we should allow entrance to Israel to a person who comes with only one purpose and it is harming the citizens of Israel,” he said. “If a BDS activist is boycotting the State of Israel and calling on other countries to do so, I recommend him to go all the way and instead of coming to Israel he can go visit Syria.”However, MK Nachman Shai (Zionist Union) said although denying entry to Lanning seems reasonable, Israel should be careful about using this new law. “It seems a legitimate act [to bar Lanning entrance] due to his long and known record in statements against Israel,” he said . “But overusing this new law and going beyond what seems reasonable is a danger to democracy. Between justified criticism and calling to boycott there is a vague line. We should act wisely while using this law to avoid unwanted international criticism.”The BDS movement, which rose to prominence in the mid- 2000s, is a loosely connected group of activists and organizations that seek to pressure Israel economically and politically.