The earthquake-proof tables are engineered to shield up to two students from flying debris during a natural disaster event. 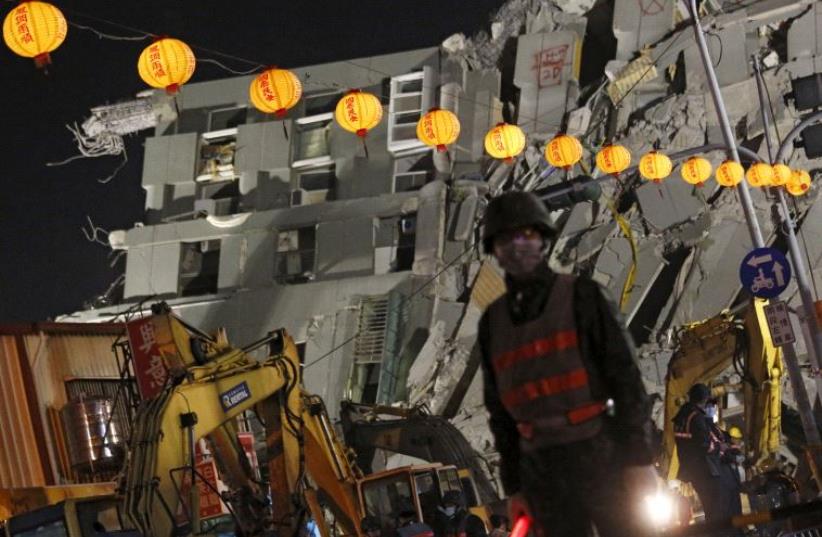 Taiwan earthquake
(photo credit: REUTERS)
Advertisement
Israel is giving a batch of 117 special protective tables to the ancient Taiwanese city of Tainan, in the hopes of saving more people from the devastating effects of earthquakes.The earthquake-proof tables, designed by a Bezalel Academy of Arts and Design student, are engineered to shield up to two students from flying debris during a natural disaster event, according to the institution.
Israeli inventors create an earthquake-proof desk designed to save lives (Reuters)
The decision to donate the tables follows the 6.6 magnitude earthquake that killed 117 people in Tainan in February. The Israel Economic and Cultural Office in Taipei, headed by Asher Yarden, decided to cancel the office’s annual Israeli Independence Day celebration and instead allocate the funds toward purchasing the tables.Designed by student Arthur Brutter, under the guidance of Prof. Ido Bruno, the tables are built using standard metal profiles and a single piece of plywood panel, Bezalel said. Due to their relatively inexpensive price tag, the tables can be constructed anywhere and come in a combination of different sizes that enable a certain area to be declared a safe zone.During earthquakes, it is generally recommended to duck under a sturdy desk in order to increase the likelihood of ending up in a “survivable void space,” and thereby escape flying debris if a building collapses, the academy explained.In Tainan, Taiwan’s oldest city, the February 6 earthquake left 117 dead and hundreds of people injured. Of those who died, 115 victims were in a single apartment complex during the event.“The gift of 117 earthquake tables to the children of Tainan is a wonderful example of the way design can contribute to the safety of children and enhance friendship between people,” Bruno said. “I am proud that we are educating our students to look at the many ways they can improve people’s lives, not only the rich and powerful, but rather the vast majority of people who need simple, trustworthy, accessible design solutions they can afford.”The first batch of 60 tables has already been given to Tainan, with the rest slated to arrive soon, Bezalel said. Two tables will be put on display in an exhibition on disaster prevention in the city’s fire bureau, while the others will be distributed among eight elementary and junior high schools that were damaged during the earthquake.