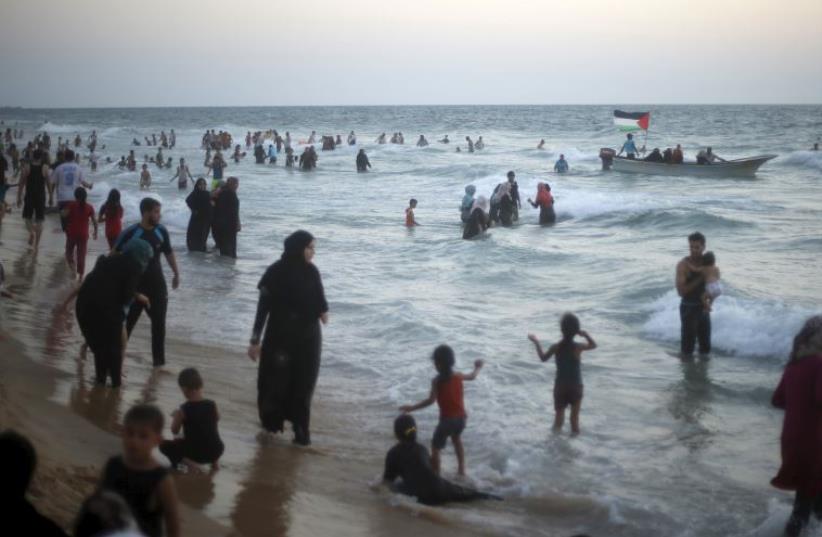 Palestinians enjoy the beach along the Mediterranean Sea in the northern Gaza Strip July 24, 2015.
(photo credit: REUTERS)
Advertisement
Israeli officials confirmed they are evaluating the possibility of transporting natural gas to Gaza, following the visit last week of a high-ranking Qatari official to the territory. The head of the Qatari National Committee for the Reconstruction of Gaza, Ambassador Muhammad al-Amadi, arrived in Gaza on Thursday through the Erez crossing along the Strip’s northern border with Israel, for the launch of the completed Qatari infrastructural and construction projects, the Palestinian press monitoring agency Middle East Monitor reported.During the ceremony, which followed upon on his visit several months ago to commit some $32 million to such projects, Amadi discussed the potential gas line, the report said.“I would like to inform you that there are many projects that we are working on for this year,” Amadi said, in a video of the ceremony broadcast by the Gaza-based Watania Media Agency. “We hope that these projects will help reduce the level of unemployment in the Gaza Strip. I hope this visit will bring good news to the Gaza Strip and its people. We have relayed, to the Israeli side, the memorandum of understanding with the Palestinian Authority, for supplying the Gaza Strip with gas and expanding the power plant. The ball is now in the Israeli court and I have discussed this issue with the Israelis. The Israelis are now studying the issue and in principle they have no problem with it.”The power plant, a 140-megawatt facility run by the Gaza Power Generating Company, is a combined- cycle site that contains four gas turbine generators and two steam turbine generators, according to the website of the PA’s Palestine Electric Company, the parent company of the Gazan firm. However, due to the territory’s inability to receive natural gas, the dual fire facility has been running on diesel fuel oil trucked to the plant. The memorandum of understanding proposes expanding the power plant to a capacity of 340 megawatts, the Middle East Monitor report said.Even when running at full capacity, the existing facility is unable to satisfy power consumption demands in the Strip. Gazans receive additional power provisions through high voltage lines supplied by the Israel Electric Corporation, but still face frequent outages and power shortages. The IEC supplies the electricity through the lines from Israel, after which the Hamas government in Gaza is responsible for its distribution throughout the territory.As far as the possibility of conveying natural gas to Gaza’s own power plant is concerned, officials from Israel’s defense establishment confirmed on Sunday that the option was under evaluation, while the National Infrastructure, Energy and Water Ministry would not provide a response on the matter.“The Coordination of Government Activities in the Territories, headed by Maj.-Gen. Yoav Mordechai, is leading administrative work together with Israeli government ministries to examine possible solutions to the energy shortage in Gaza, including the placement of a pipeline to transport natural gas, which will ultimately be brought for a decision by the political echelon,” COGAT said.