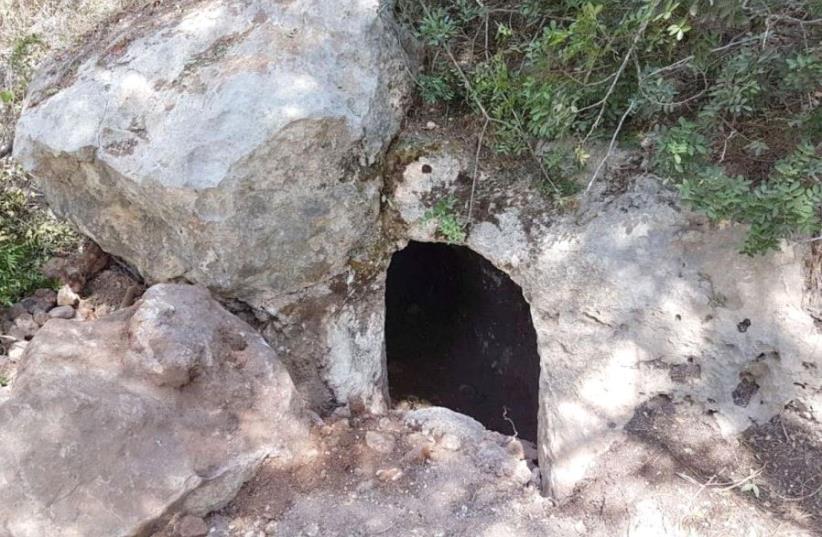 The entrance to the underground Zippori archeological site
(photo credit: NIR DISTELFELD/ ISRAEL ANTIQUITIES AUTHORITY)
Advertisement
Two suspected Arab antiquities thieves were arrested in the North after attempting to plunder an underground archeological site in the ancient city of Tzipori, the Israel Antiquities Authority said on Monday.According to Nir Distelfeld, inspector of the Unit for the Prevention of Antiquities Robbery in the northern region, the intruders were arrested following a brief foot chase over the weekend.“They conducted an unauthorized excavation in the area of the antiquities site in an attempt to break into the ground and locate an underground hiding space from the Roman period, about 2,000 years ago,” he said.“Inspectors from the unit and volunteers reached the scene and managed to capture two of the three members of the group after a brief chase. The suspects, both in their 30s, had digging tools and are residents of nearby Nazareth.”While it remains unclear if the suspects had any stolen antiquities, Distelfeld said they were arrested and taken for questioning at the Nazareth police station.“This is the second group of antiquities pirates that have been captured in the past two weeks in the North, and it seems that the heat and fasting during Ramadan does not deter the antiquities robbers, who dream of getting rich from finding ancient treasures,” he said.Distelfeld lamented that there has been a spike in attempted antiquities thefts at sites in nearby Karmiel, which the robbery prevention unit has successfully thwarted.“In recent weeks, we have succeeded in thwarting the continued damage to the antiquities sites, which are an important resource for us all,” he said.Amir Ganor, director of the Unit for the Prevention of Antiquities Robbery, said credit for the thwarted operations largely belongs to concerned area residents who report suspicious activity at the historic sites.“We owe the success of thwarting this band of bandits to a vigilant citizen who toured the area and identified the illegal activity at the antiquities site,” he said. “In recent months, the Israel Antiquities Authority has stepped up enforcement against antiquities robbers throughout the country and in the North in particular, and we are working with many volunteers from the region and Border Police to respond to any information from the public at any time.”Theft and destruction of an archeological site is a crime punishable by up to five years in prison.