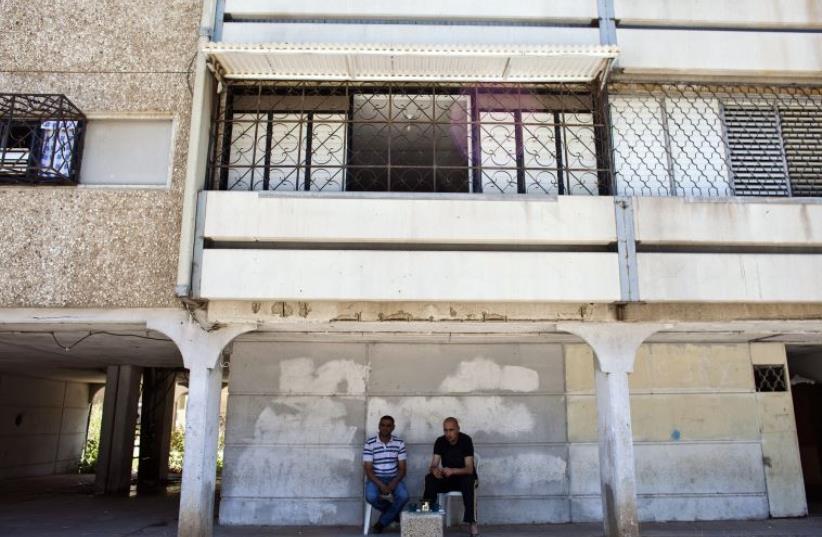 Residents sit with cups of coffee outside their apartment building in Lod
(photo credit: REUTERS)
Advertisement
An Israeli organization promoting Arab-Jewish coexistence demanded the mayor of Lod retract a statement in which he suggested his Arab constituents are a security threat.The Sikkuy association, which was founded in 1991 and has offices in Haifa and Jerusalem, issued its statement on Thursday following an interview that Mayor Yair Revivo of the Likud party gave to the Makor Rishon daily about his central city, where a quarter of the population of approximately 70,000 people is Arab.Revivo, who is Jewish, said Lod “would be an Arab city today if not for the Garin Torani” — a reference to the religious-Zionist commune that began working in Lod 20 years ago to strengthen Jewish identity there. “They just saved a strategic city in Israel. Probably, if not for the Garin, emigration would have continued and Lod would be an Arab city controlling our only airport, with all that this implies,” Revivo said.Sikkuy, whose donors include the European Union, the New Israel Fund and the UJA Federation of New York, called Revivo’s statement “grave proof that he has trouble meeting his responsibilities and risks escalating tensions.”In its statement, Sikkuy also called on the interior ministry to distance itself from Revivo’s statement, which Sikkuy called “a racist act which compromises public duties” because it “marks Arab residents as a ‘demographic threat’ and a danger to security that needs to be countered.”Revivo’s term follows scandals that left the city — a hub for organized crime and one of Israel’s poorest — for years without elected leadership. His term has been considered successful and he has received considerable praise in media for infrastructure projects, some focused on Lod’s Arab neighborhoods.