Israeli solar power: A literal light unto the nations

Israeli nonprofit ‘Innovation: Africa’ is working on the ground in 147 African villages.

By KAYLA STEINBERG
The Israeli Heart and Mind Just Transformed the Lives of 1 Million Africans Forever. (Credit: Innovation: Africa)
Advertisement
Bringing drip irrigation and solar power technologies to villages in eight African countries and lifting millions of people out of extreme poverty, an Israeli nonprofit organization called “Innovation: Africa” is literally a light unto the nations.The organization was founded in 2008 by Sivan Ya’ari, who says she was motivated by the poverty she saw during her first trip to parts of Africa at age 20, where she worked for a company that manufactured jeans. “The more time I spent in the villages, the more I realized that the main challenge, and the reason Africa is in poverty, is the lack of [access to] energy,” she said of that trip.Some 620 million people across the African continent do not have access to electricity or running water. This means unlit homes, no refrigerators, and no fancy medical appliances. Ya’ari said she realized that “if we bring energy, we can solve many of the challenges” that Africans are facing and improve education, health, and access to water.The nonprofit has a full time local staff working on the ground in 147 African villages as well as a team in Israel, all working on water surveys, drilling, construction, and solar power.The Israeli engineers who create drip irrigation and solar power technologies also have double duty in Africa, where they often go to train fellow engineers. Innovation: Africa brings technologies to Uganda, Tanzania, Malawi, Ethiopia, Senegal, the Democratic Republic of the Congo, Cameroon, and South Africa, where Ya’ari currently is traveling.Her most recent trip was to Karamoja, a region in northern Uganda, in early July, where she and her team returned to aid with starvation and lack of water. They had gone in February after being asked by the government to assist, but did not realize the extent of the poverty and famine. 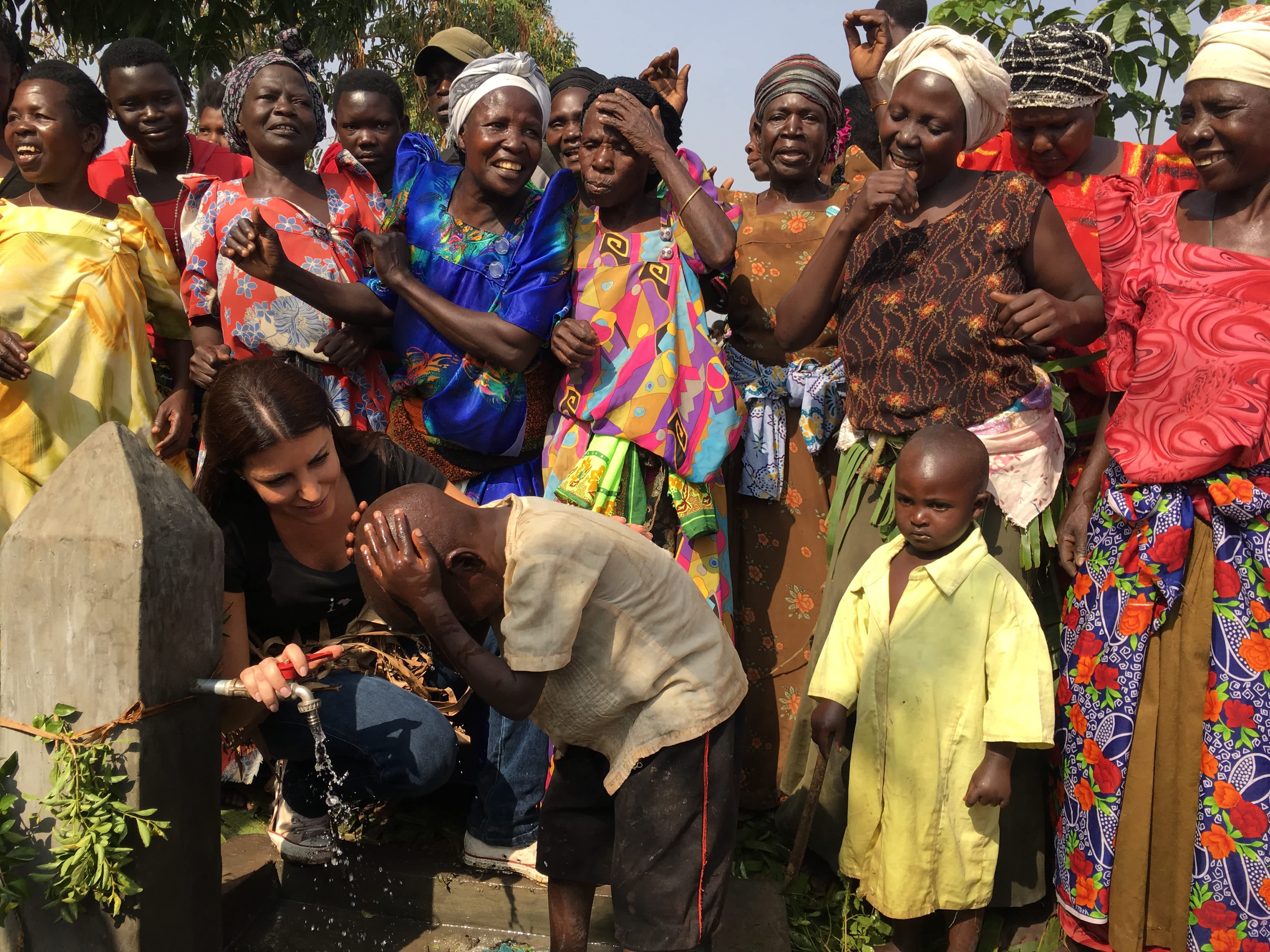 Sivan Ya'ari and villagers watch with delight as a child drinks clean water in Nabweye village. (Credit: Lior Sperandeo)Innovation: Africa usually just brings drip irrigation and solar energy technologies, yet they quickly found that the villages needed something else – food. They saw people drinking blood to stay alive and children on trees, clinging to life by eating leaves. “People are losing their lives for no reason, because there was so much water beneath their feet,” said Ya’ari.Devastated, Innovation: Africa’s workers brought maze and beans to 27,000 people in six Ugandan villages and drilled for water. Now, after months of waiting, Ugandans and the Israeli teams are finally seeing the fruits of their labor, with foods growing from the once-barren land.Also on her July trip to Uganda, Ya’ari brought with her a group of donors who sponsor villages. Innovation: Africa receives its funds primarily from donors, including individuals, foundations, and corporations who have decided to adopt whole villages or certain public buildings such as schools and medical centers. These donors then travel to their adopted villages, get to know the people there, and watch as lights illuminate formerly dark buildings on the days of solar installations.They then can follow the impact of the technologies in the villages. Innovation: Africa’s team in Israel created a device that allows donors to track their village’s progress, such as the amount of energy produced and water pumped. Imagine: a bar mitzva boy donates the money he receives to aid villages in Africa and then spends his first few weeks as a Jewish adult getting to see firsthand the impact that his donation has made on the international community.As a result, Innovation: Africa both helps villages and also allows people to positively contribute to the world and save lives. Ya’ari described the effect of her organization’s work as being beneficial “not only for today’s generation, but for many generations to come.”Additionally, once solar and water technologies are brought to Uganda and other countries, schools are established and the local government sends teachers to villages. Doctors also return, now able to operate with solar energy and water.While aiding Uganda, Innovation: Africa continues to sustain its projects in other nations, such as Cameroon, where it recently enlarged its program to include aid to the 259,000 refugees from the wartorn Central African Republic and still more from Nigeria who are inundating the country. UNICEF requested that the nonprofit come to help the refugees, drill for water, and provide solar energy.“We are proud to be working with UNICEF, sending Israeli engineers, and most importantly training local engineers in Cameroon,” said Ya’ari.People of Ínnovation: Africa' install solar panels on the roof of Nyanza Primary School. (Credit: Lior Sperandeo).Before traveling to different villages, Ya’ari and her team speak with regional and local government officials as well as village chiefs so that they can jointly figure out how to best implement the technologies. Innovation: Africa also verifies that the villages will be receptive to the technologies, a measure they implemented after a difficult encounter with resistant witches in Tanzania.The organization also hires locals who will translate from English or French to various African languages. They have many translators, for in some countries, 100-200 dialects may be spoken.The nonprofit’s work also builds Israel’s reputation abroad. “Most of the people we’re helping have never heard of Israel before,” Ya’ari revealed. By buying many of the solar and drip irrigation technologies from Israel and creating others themselves, Innovation: Africa improves the Israeli economy and brings a piece of the Holy Land to Africa.“I personally feel that we’re actually fulfilling Israel’s destiny,” said Ya’ari. “We are supposed to be the light unto the nations.”Yet while Innovation: Africa is currently helping nearly 150 villages, its goal is to do more, to help additional villages in the eight countries in which it is currently operating. “Because we have such a large list of villages waiting, my goal would be to get the funding to [help] them,” Ya’ari explained.She hopes that more individuals and foundations will choose to donate and adopt villages so that she can continue to bring solar and water technologies to them. “Let’s change this world as partners together!”