Israeli teen stabbed in back outside Old City’s Damascus Gate 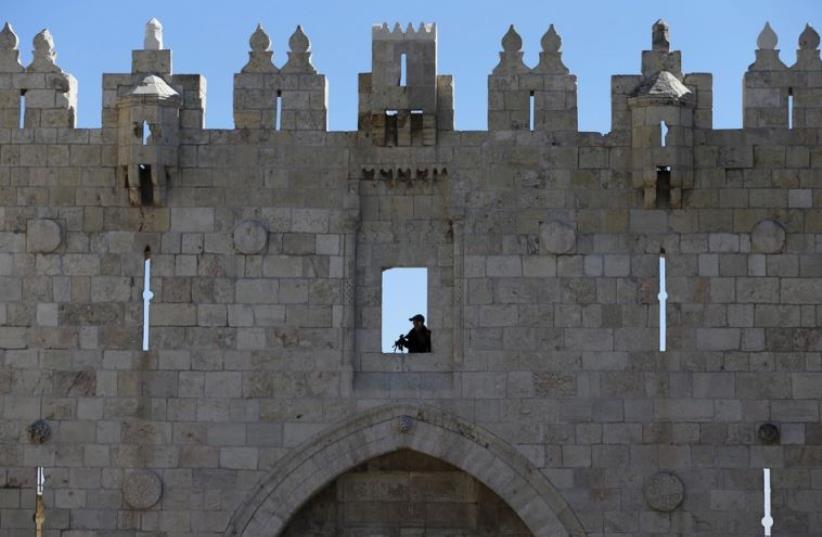 A Border Policeman holds his weapon as he guards the area from above while his comrades patrol at Damascus Gate in Jerusalem's Old City
(photo credit: REUTERS)
Advertisement
Following a relative lull in violence outside of the Old City’s Damascus Gate in east Jerusalem, an Israeli teenager was stabbed in the back Monday night near the flashpoint area, in what police are deeming a criminal matter, not terrorism.At approximately 11:30 p.m., police said the unidentified 17-year-old victim was assaulted from behind while walking on Shivtei Yisrael Street by the suspect, who fled the scene. The teen was treated by Magen David Adom paramedics before being transferred to Shaare Zedek Medical Center in light condition.“The incident was reported to police patrolling the area and an investigation was immediately opened,” said police spokesman Micky Rosenfeld on Tuesday. “Units in the area searched for the suspect, who fled, and looked into a number of different directions before confirming it was a criminal incident, and not a terrorist attack.”Rosenfeld added that police are reviewing CCTV surveillance footage taken from the area to identify and arrest the suspect.“We’re also looking to see if there is a relationship between the man who was stabbed and the suspect,” he said.During the height of the terror wave that engulfed the capital last September, Damascus Gate became the site of numerous stabbings and deadly attacks, including the murder of 19-year-old Border Police officer Hadar Cohen.Noting the volatility in the area, Rosenfeld said police remain on heightened alert to ensure no more terrorist attacks take place.“Despite the fact that in that general area there have been recent terrorist attacks, we confirmed this is a criminal incident, and police activity will continue in and around the Old City on a daily basis to prevent terrorist attacks.”