"The Muscles from Brussels" is in Israel on a five-day visit. 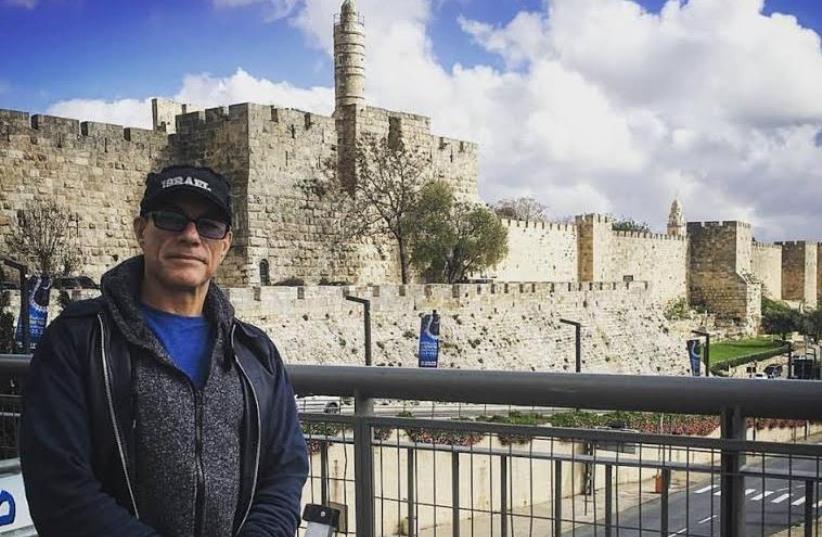 Jean-Claude Van Damm poses in front of the Old City
(photo credit: FACEBOOK)
Advertisement
Sure, Jean-Claude Van Damme can dismantle world-class tough guys with a swift roundhouse kick to the head or shattering punch to the jaw, but “The Muscles from Brussels” learned the hard way in Jerusalem that fighting anti-Israel Internet trolls is a different story.On Tuesday, during his five-day sojourn in the country, the legendary action star posed for a seemingly innocuous picture outside the Old City, which he captioned “Shalom from Jerusalem, Israel!” on his Facebook page.That’s when the trouble started.Within minutes, a torrent of angry postings flooded the page denouncing Israel and Van Damme for referring to its capital as Jerusalem.

“You should say salaam from Palestine,” wrote Soufiane Benalla, who garnered 1,269 likes.“Jeruzalem [sic] is not from Israel But from Palestina,” added Isa Tubadan, amassing 796 likes.An Arabic Twitter handle that translates to “Allah Dararmeh” received 146 likes after writing: “You are in Jerusalem the capital of Palestine, not Israel ... is now the people I hated after what I admire you. Screw you!” Salah Maaty received 559 likes after denouncing Van Damme for visiting the Western Wall, where he donned a kippa, prayed, and placed a note in one of its crevices.“Hi Damme ... earlier u was my hero ... i don’t know ur religion ,,, i wasn’t interested because i believe that who create u who will judge you for so and so ... i sow [sic] today your picture by the wailing wall in Jerusalem ,,, u lost my respect and millions like me ... we won’t argues on this case ,,, only one question will ask you !!! HOW MUCH THEY PAY YOU FOR THIS ???,” he wrote.Meanwhile, Hiba Abusharkh said she was incredulous that the actor identified the Old City as Jerusalem.“Oh my god! What? Israel? Well actually I believe you are one of THE BEST actors, and I truly love watching your movies, but when I read your caption on this picture I was really depressed! It’s Palestine, occupied Palestine, there is no Israel, I’m not gonna argue with you about this fact but your Palestinian fans are really annoyed because of this!” she wrote.Still, Israel had its share of defenders, albeit with fewer likes.“Welcome to Israel Jean-Claude! You got lots of fans here! Now can you do something about helping us sort out those terrorists!” wrote Arsen Ostrovsky, to a chorus of five likes.Shay Zagoury received 106 likes after defending the picture: “I am a big fan of you jean claude van damme dont pay attention to those idiots who thinks jerusalem is palestine enjoy your vacation.”“Long lives Israel, forever lives as long as there is god, he will always protect Israel from all this hatred,” wrote Netanel Medina, adding “Shalom too van-damme.” He received 85 likes.While Van Damme appeared to give in to the pile-on by deleting the word Israel from the caption, he left the image posted with the words “Hello from Jerusalem!!” with the hashtags #TeamJCVD #JCVD #MEGAPOSITIVE.As of Wednesday evening, it has attracted over 142,000 likes, 3,129 shares, and 6,600 decidedly pro and anti-Israel comments.
Advertisement
Subscribe for our daily newsletter