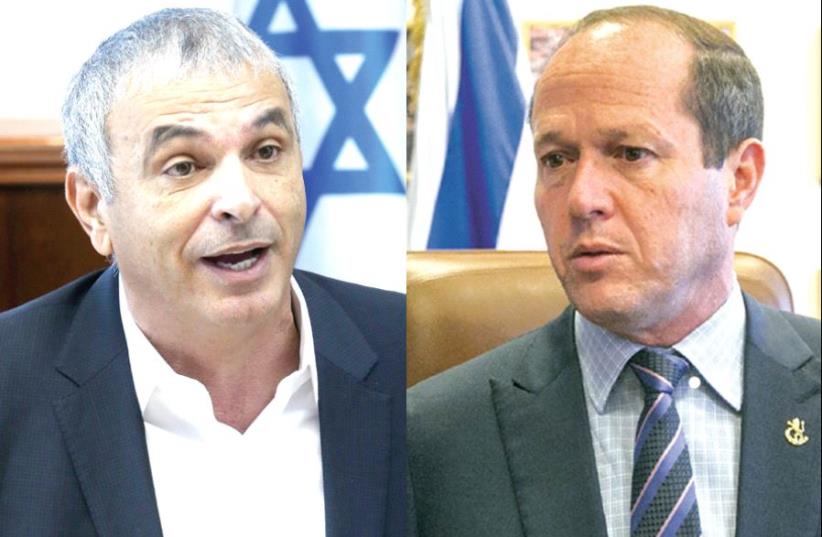 Kahlon and Barkat
(photo credit: MARC ISRAEL SELLEM)
Advertisement
Jerusalem Mayor Nir Barkat sent a letter to Prime Minister Benjamin Netanyahu and cabinet ministers last week saying the Finance Ministry is reneging on its commitment to provide agreed upon budgeted funds to the capital.“In a meeting in the Finance Ministry in which the administrative branch of the municipality was summoned, we were told that the government – led by the Finance Ministry – is bluntly rejecting agreements that were concluded in 2017... and that it unilaterally decided not to transfer NIS 105 million that it had [previously] committed to transfer,” the letter reads.“Renouncing the agreements – which were backed by the Prime Minister Office’s director-general with no further notice – is crossing a redline and an unprecedented breach of a ministerial agreement,” Barkat said in the letter.The mayor said that pushing off these transactions is delaying approval of the city’s budget for 2018, which raises municipal spending by NIS 143m., and that its deficit could be doubled.To prevent this deficit, he said the municipality will have to carry out “hard and painful cutbacks” that will include firing workers, freezing support to welfare NGOs and wide-scale cuts in the budgets of the local community administrations.Attacking Finance Minister Moshe Kahlon, Barkat wrote to the ministers: “I am asking you, as people who see Jerusalem as a top priority, to bear national responsibility and not allow the finance minister to veto Jerusalem’s budget.“Furthermore, I am calling on you to act on proper budgeting for the city for 2018 – a budget that will end the discrimination and bring the city back onto a track of growth and development. Jerusalem needs your intervention in solving this budget crisis today more than ever.”
The Finance Ministry responded, saying that during Kahlon’s tenure the special grant to Jerusalem doubled and reached an all-time high.“During the period of Minister Kahlon, Jerusalem was given a special grant in an unprecedented sum of more than NIS 3m.,” the ministry said. “Moreover, Kahlon lowered corporate tax in Jerusalem to 7.5% to attract companies and factories to the city while encouraging government companies to move to the city.“Jerusalem is above any dispute, and the Finance Ministry will keep strengthening it and its residents just as it did until now,” the Treasury said.