Immigrants from France to Israel generally raise the economy and create jobs, says the Qualita organization which has teamed up with the Jerusalem municipality to attract business people. 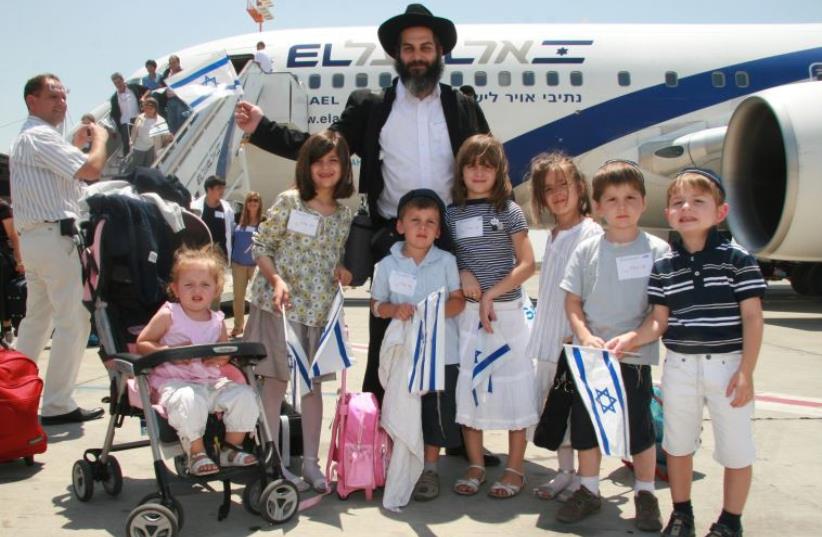 French New Immigrants Departing from Paris for Israel
(photo credit: FLICKR/THE JEWISH AGENCY FOR ISRAEL)
Advertisement
A new project initiated by the Jerusalem Municipality and the Qualita organization encourages entrepreneurs and businessmen from France to immigrate to Israel and bring their skill set with them.
Since starting in January, 12 new businesses run by French immigrants have started including a film production business, a computer business, an art gallery, a podology clinic, a wine and beverage store, a pizzeria and more.
Jerusalem mayor Moshe Lion said the municipality is actively "encouraging aliyah among Diaspora Jews" and is "providing all its services for the new immigrants."
"I invite business owners to come and open their businesses around the capital," Lion stated. The municipality believes new immigrants create "a significant contribution to the city's economy and cultural diversity, an increase in tax revenues and municipal taxes, and an expansion of employment in the city."
Many other entrepreneurs are expected to "make aliyah", the Hebrew term for immigrating to Israel, during the coming year, after pilot trips arranged through the project. When they arrive in Israel, the entrepreneurs receive free advice from municipality representatives and the Qualita organization for building a business plan, navigating new laws, legal aid, and other helpful tips.
Pini Glinkevich of the Municipality immigrant and absorption office noted that in 2018 there were 23,122 new immigrants living in Jerusalem of which 6,169 were from France.
"Starting from the pre-immigration stage and continuing after arrival, we provide close accompaniment through a supportive organizational network," he stated.
Qualita was founded in 2015 by French-Jewish businessman Marc Eisenberg, a prominent philanthropist and son of television producer and French rabbi, Josy Eisenberg.
Ariel Kandel, general manager of the organization stated, "immigrants from France constitute a large economic force and a significant growth potential for the city of Jerusalem," noting an economic study conducted at Bar-Ilan University on the subject. "As a resident of Jerusalem for many years, I am very pleased to see that the Jerusalem Municipality has managed to understand the great potential of French immigrants," he commented. "I am confident that the new project will lead to a large rise of business people from France who will turn Jerusalem into their home."