The JNF-KKL B’nai Mitzva Remembrance Wall allows Diaspora teens to forge a direct link with the lives of young people murdered in the Holocaust. 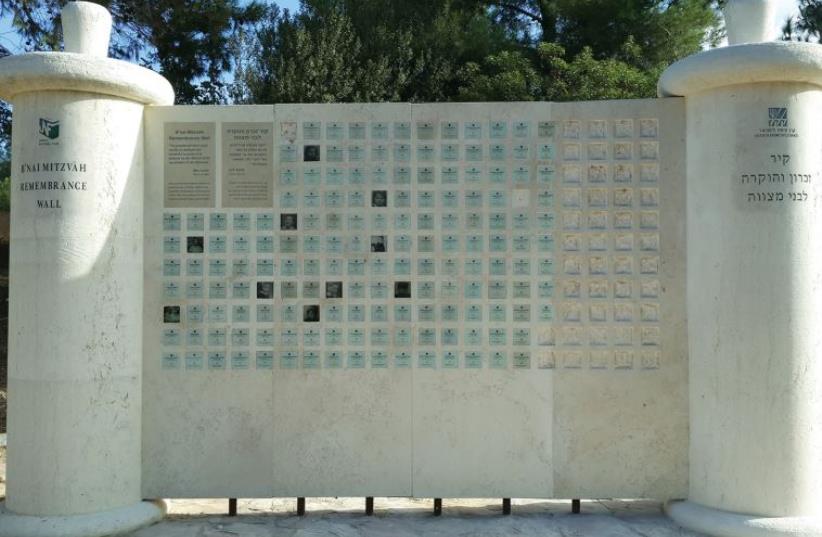 THE JNF-KKL B’nai Mitzva Remembrance Wall in the Jerusalem Hills
(photo credit: JNF)
Advertisement
Nearly 10 years ago, when a boy from St. Louis, Missouri, named Max Levin visited Jerusalem with his parents to celebrate his bar mitzva, he came across books in the capital’s JNF-KKL office commemorating the 1.5 million Jewish children murdered during the Holocaust.Seeking to dedicate his ceremony to a meaningful cause, Max had an epiphany.“I knew that I wanted my bar mitzva project to deal with the destruction of the Holocaust and rebirth of the Jewish people in the Jewish homeland,” he said of that time. “When I saw those books, I knew at that very moment that I wanted to dedicate my bar mitzva to the kids in those books – the ‘lost children of the Holocaust.’” Aided by his parents, Bud and Judy, Max worked with the Jewish National Fund to create the JNF-KKL B’nai Mitzva Remembrance Wall, which allows Diaspora teens to forge a direct link with the lives of young people murdered in the Holocaust.“We wanted to create a way to memorialize those children who never had anyone say kaddish for them,” said Max’s father. “This wall will honor the past and look ahead to the future. It will continue the circle of life.”Located near Jerusalem in the American Independence Park, the stone wall, designed to look like a Torah scroll, is now embedded with glass tiles bearing the names of nearly 200 bar/bat mitzva children, coupled with their counterparts killed during the Holocaust.One side of each revolving plaque is inscribed with the name, hometown, and date of the child’s bar mitzva; on the other side is the name and home country of a child who perished at the hands of the Nazis before they could have a ceremony of their own.“Max’s parents are heavily involved with JNF, and worked closely with JNF-KKL to make this wall,” said JNF’s Yael Levontin on Wednesday, International Holocaust Remembrance Day.“The pairing of the two is what is so beautiful, because it gives participants the opportunity to forever be linked to the past. And as the years go by, there are fewer survivors around to tell their stories, so this connects the future and past.”Following the ceremony, held at the monument, each child is presented with a commemorative certificate including their shared names. Participants can also plant a tree to honor their slain counterparts.“It’s just very moving and very beautiful, because you have these kids who want to spend their bar or bat mitzva money to form a connection to the past with other boys and girls who were murdered before they were able to have their bar or bat mitzvas,” said Levontin of the $1,800 fee.All proceeds go towards developing, maintaining and advancing JNF-KKL’s five Israel camp sites.