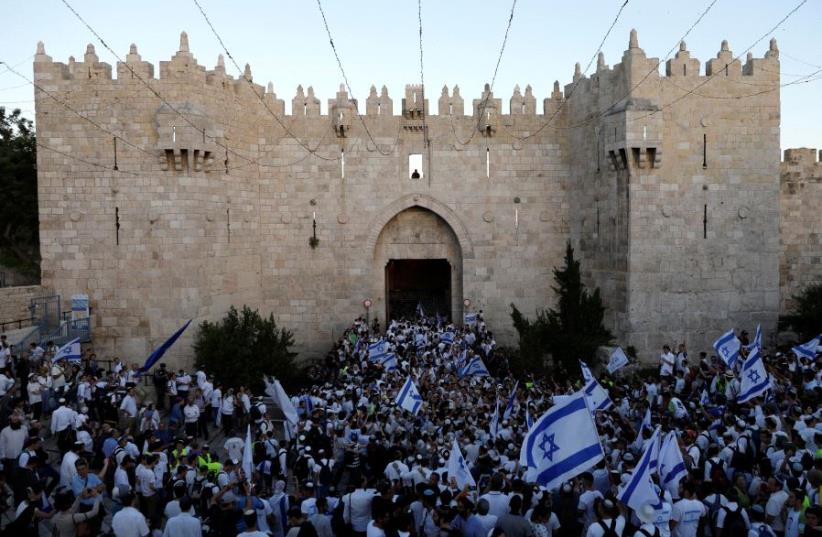 Israelis celebrate as they hold Israeli flags during a parade marking Jerusalem Day, the day in the Jewish calendar when Israel captured East Jerusalem and the Old City from Jordan during the 1967 Middle East War, just outside Damascus Gate outside Jerusalem's Old City May 24, 2017.
(photo credit: RONEN ZVULUN/REUTERS)
Advertisement
Some 88% of Jewish residents in Jerusalem are happy with where they live, compared with 49% of Arabs residents, according to a report released by the Central Bureau of Statistics ahead of Jerusalem Day.Nationwide, some 84% of people are happy with where they live, 88% of Jews and 69% of Arabs, the report said.Despite this, the report, which provided statistics on all aspects of life in the holy city, found that 90% of Jerusalemites aged 20 years old and above are generally happy with their lives, 96% of Jews and 80% of Arabs.According to the data, Jerusalem’s population at the end of 2017 was about 900,000 people, accounting for some 10% of the country’s population and making it the largest city in Israel.The findings revealed that at the end of 2016 there were 551,000 residents, or 62.3% of the city’s population, comprised of Jewish, non-Arab Christians or other religions, while the Arab population stood at 332,600, or 37.7% of the city’s residents.Among the Jews residing in the city, more than a third were haredi (ultra-Orthodox).According to the data, 36.8% of the city’s residents defined themselves as haredi, 20% religious, 10.7% traditional-religious, 10.9% traditional but not very religious and 21.5% secular.The report found that roughly two-thirds of Jerusalem’s residents aged 20 and above were born in the city, compared with an  average of 30% among other cities nationwide. Additionally, four out of five residents had lived in the city for more than 20 years, 74% of Jews and 97% of Arabs, compared with 59% of the population in other cities.The population of Jerusalem grew in 2016 by 16,900 residents, 8,100 Jews and 8,800 Arabs. Some 20,300 people joined the population due to natural growth, such as new births, and 4,300 people as a result of international immigration. About 8,000 people left the city.A majority of residents relocated to Jerusalem from Tel Aviv and Beit Shemesh, while the majority of residents leaving the city also relocated to Tel Aviv and Beit Shemesh.Regarding the fertility rate, the report said the average number of children per woman in Jerusalem stood at 3.89 – higher than the national average of 3.11. Among Jewish women the gap was even more pronounced, at 4.32, compared with the national average of 3.06.According to the data, Jerusalem households comprised of an average 3.88 people, larger than the national average of 3.32 and in other major cities, such as Tel Aviv (2.25), Haifa (2.5) and Rishon Le Zion (3).Jewish households in the city had an average of 3.3 people, compared with Arab households (5.2) and the national average (4.5).The report indicated that the percentage of the labor force in Jerusalem in 2017 stood at 53%, compared with the national average of 64%. Unemployment rates stood at 5.1% in Jerusalem, above the national average of 4.2%.Despite some turmoil in Israel’s capital this past year, tourism to Jerusalem increased 25% in 2017.The number of international tourists visiting Jerusalem increased 36%, as some 1.1 million people from abroad visited the city, the report said.