By JERUSALEM POST STAFF
APRIL 28, 2020 14:04
A Google Maps satellite image of Israel’s Halutza community
(photo credit: JNF USA)
Advertisement
On Wednesday, April 29, 2020, Israel’s population will reach 9.2 million people, a more than 10-fold increase from its founding in 1948. While there will be no barbeques in parks, no fireworks in the sky, nor parties in Tel Aviv’s discotheques, one thing is certain: an ecosystem of communities, conservation programs, health services, and economic initiatives supported by Jewish National Fund-USA (JNF-USA) in Israel’s Negev and Galilee will ensure a connected, yet independent Israel thrives for generations to come.
Health IndependenceThere’s a region in Israel’s south where the borders of Gaza and Egypt can be seen in one view. In fact, it’s a region that Yasir Arafat declined during Camp David peace negotiations because in the late leader’s opinon, no crops could ever be grown there. Yet today, the aerial landscape of Halutza, a community started by former residents of Gaza’s Gush Katif, looks more like a chess board of lush green fields contrasted by white plastic greenhouses and red tiled roofs. It is a community that has literally grown out of the sand dunes of the arid desert to become a symbol of the miracle that is Israel.

A Google Maps satellite image of Israel’s Halutza community (Courtesy: JNF-USA)
For many years, however, the remoteness of this pioneering community meant high quality medical attention was a 90-minute car ride away. Today, a new medical center in Halutza has brought “health independence” to the residents of the entire region. The center, opened with the support of the Leona M. and Harry B. Helmsley Charitable Trust and JNF-USA, features a dental and pediatric clinic, maternity care, physical therapy center, x-ray capabilities, and many other services.
In the short time since the center has been open, there have been over 20,000 medical visits from residents to the Helmsley Charitable Trust Halutza Medical Center. In addition, community access to emergency services in Halutza has been enhanced, thanks to a lead gift from JNF-USA partners, Ruth and Bernie Mintz, and the provision of a new firefighting vehicle.
“Having high quality health services in such a remote area means we can now have ‘health independence’,” said JNF-USA's Halutza Liaison for Negev Community Development, Yedidya Harush. “Not having to drive 1.5 hours to a doctor’s appointment when your daughter cries that her tooth hurts for my family and me means ‘health independence’. Seeing the faces of new families, looking to move to Halutza, when they see our beautiful Helmsley Charitable Trust Halutza Medical Center that we built together, that is the importance of having ‘health independence’.  Thanks to JNF-USA, we are able to continue to develop the Negev and secure a prosperous future for our homeland.” 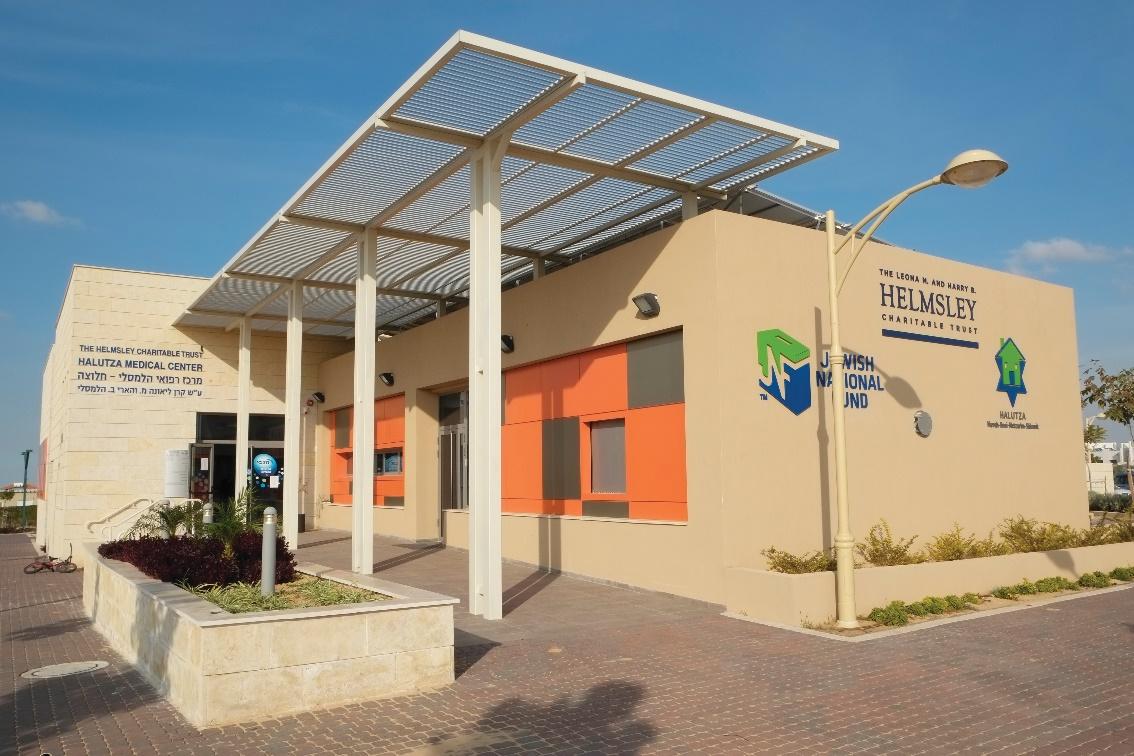 A sign on the side of a building Description automatically generated
Economic Independence
In the Negev’s largest city, Be’er Sheva, the Lauder Employment Center has played a critical role in aligning the efforts of Israel’s business, university, and job seeker communities. The Center’s Vice-President, Tamar Gil, believes economic independence is key to the region’s success: “Realizing dreams, security, and freedom rely on economic independence,” said Gil. “When Israel was established, we knew we needed economic independence to secure our country, our safety and our freedom. The same goes today, for every household in Israel; to flourish, each citizen deserves the right to vocational development, economic independence, and the means to fulfill their dreams. That's why we do what we do at the Lauder Center for Employment.” 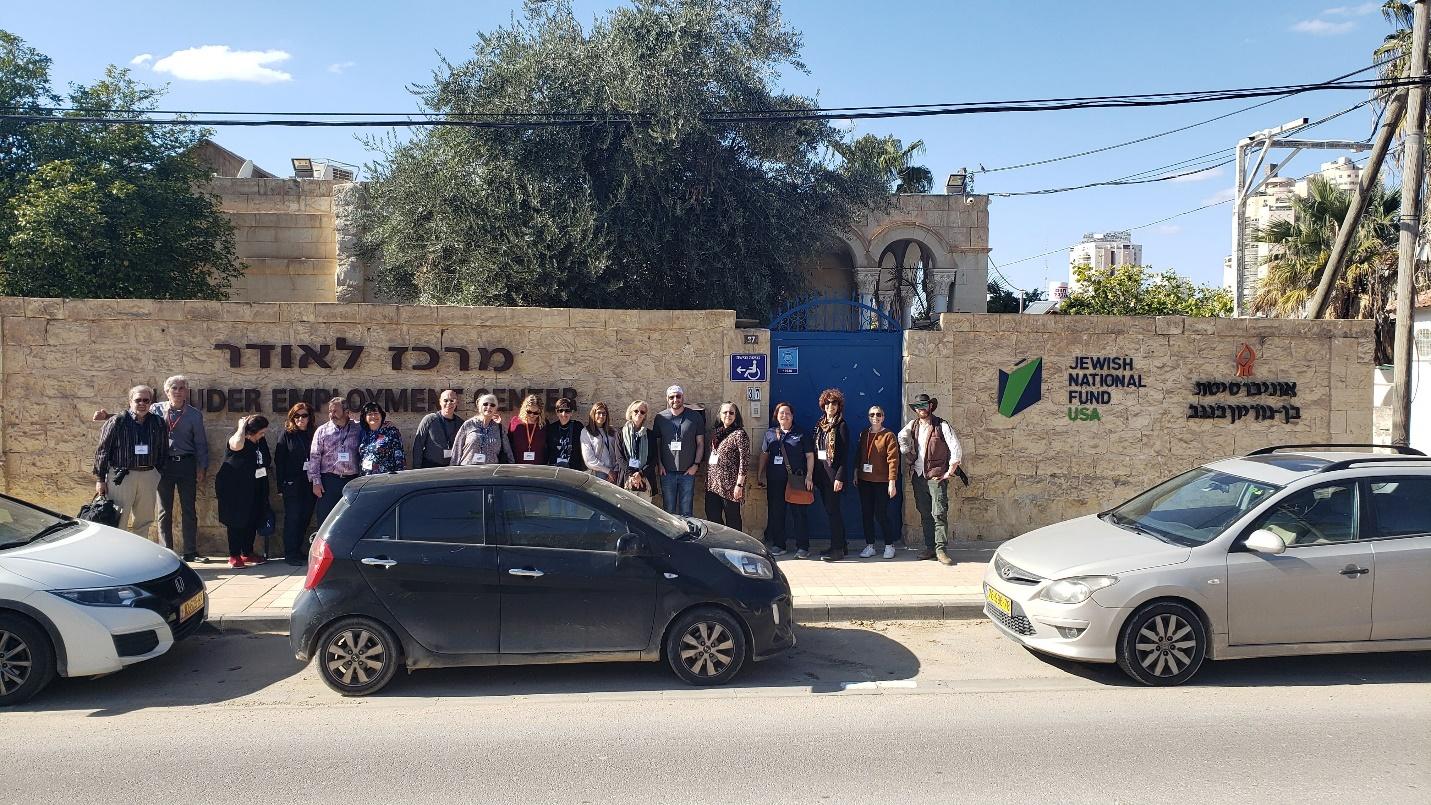 JNF-USA Makor members visit the Lauder Employment Center in Be’er Sheva (Courtesy: JNF-USA)
Complementing the Lauder Center’s efforts in the north is JNF’s Western Galilee Now (WGN) initiative. With most jobs in Israel’s Galilee directly or indirectly reliant on tourism, JNF-USA launched the WGN initiative five years ago with the goal of consolidating regional efforts to boost tourism and support local small businesses.
Michal Shiloah Galnoor, CEO of Western Galilee Now and a fifth-generation Jerusalemite, made the small community of Klil her home after she fell in love with the magic of the region: “Through JNF-USA’s vision and leadership, our chamber of commerce was started by local wine makers, cheese makers, and tour providers who realized that if they combined forces they could promote the area more effectively. “When local businesses thrive, they gain a sense of economic independence and empowerment with the knowledge that they can provide for their family.” 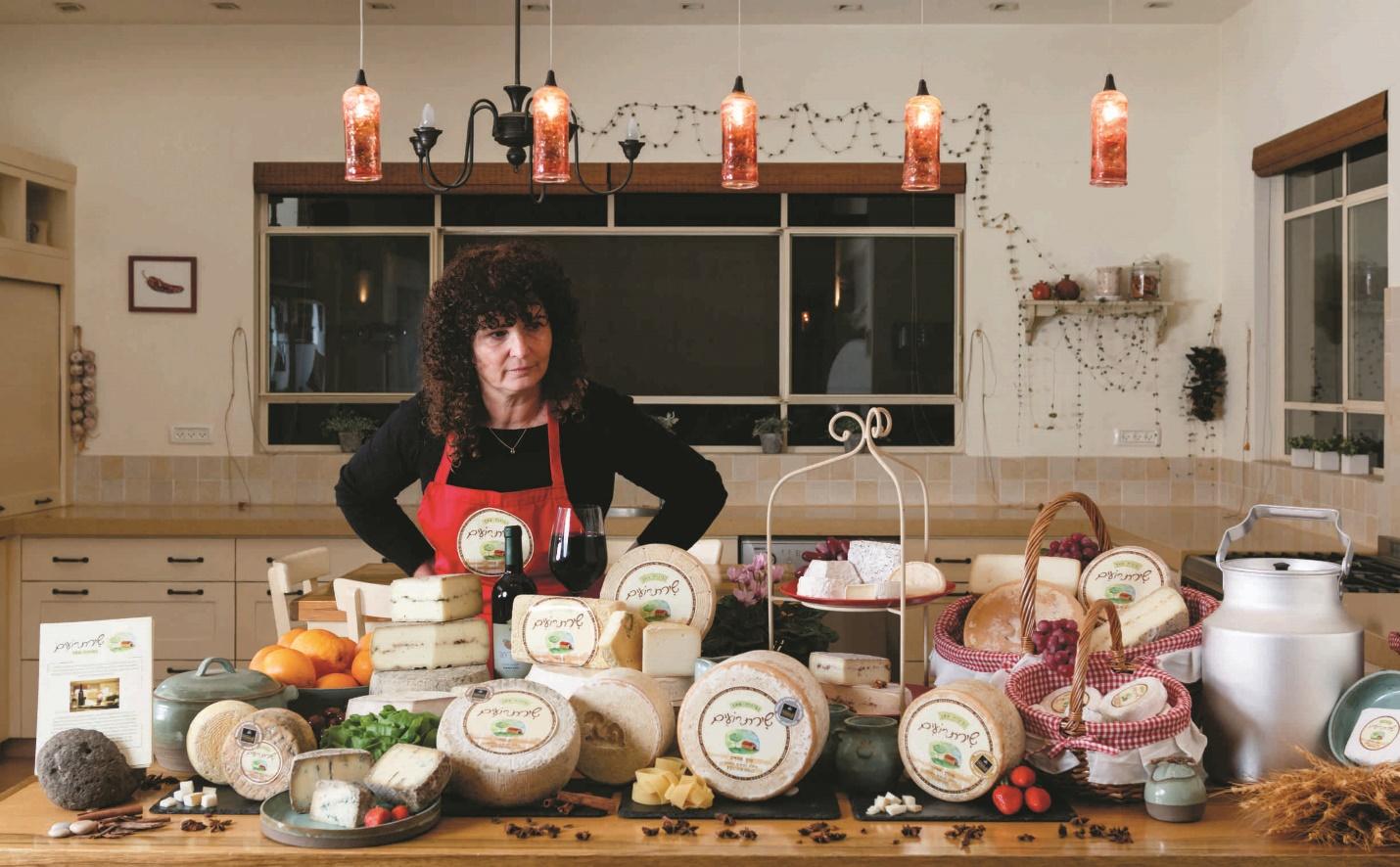 Artisanal cheese is produced at Shirat Roim Dairy, a member of WGN (Courtesy: JNF-USA)
Because of the temporary downturn in tourism caused by the global health crisis, WGN and JNF-USA have launched a virtual shopping platform called “Online Mitzvah Marketplace:Shop Israeli Good,” where U.S. consumers can support Israeli businesses by purchasing wine, jewelry and other artisanal products at jnf.org/shopping.
Environmental Independence
JNF-USA made the desert bloom, yet it’s organizations like Green Horizons that help young Israelis appreciate and embrace Israel’s modern-day environmental miracle and deep connection to the land itself.
With the support of JNF-USA, Green Horizons offers educational outdoor activities for young Israelis with a focus on hiking to foster the development of interpersonal and leadership skills, social responsibility, whilst also promoting Zionist values and a connection to the land of Israel.
JNF-Green Horizons Liaison, Ido Eisikovits’ face lights up when he thinks about what independence means to Green Horizons: “Just as Israel’s greatest leaders like Herzl, Ben-Gurion, and Begin understood, dealing with adversity is not an option. It is a responsibility. The same can be said about the way we approach education. As Green Horizons participants are challenged in the outdoors, they learn new life skills.” 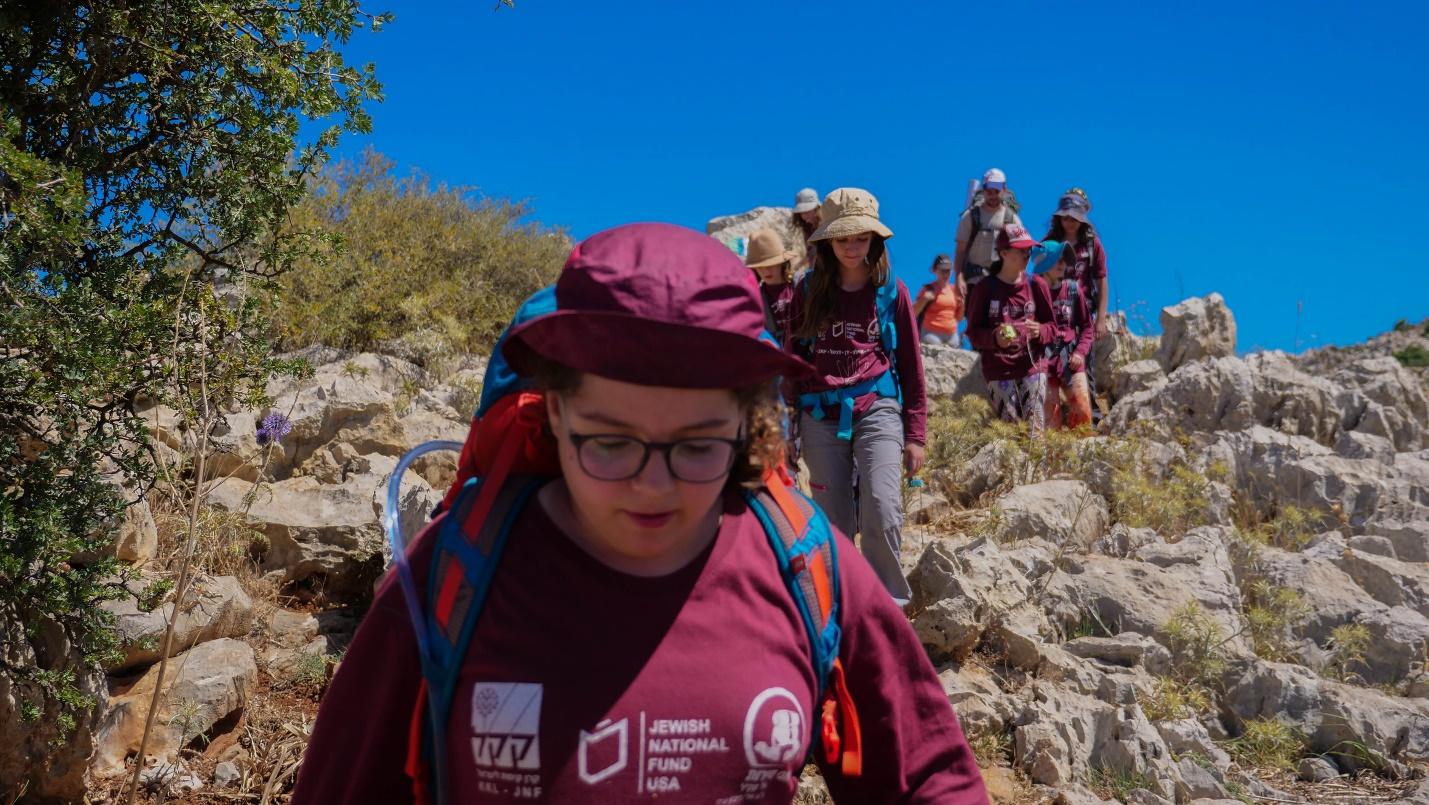 Green Horizons teens explore Israel’s great outdoors (Courtesy: JNF-USA)
Over the past 30 years, Green Horizons has educated more than 20,000 young Israelis and today is the only organization in Israel that teaches school-age students about the interdependence between Zionism and the environment.
“Beyond the educational value of getting to know their ancestral homeland, this initiative presents a unique opportunity for self-empowerment, enhanced independence, and other leadership skills. While participants learn how to read maps and cook on an open fire, they also gain newfound independence and confidence. Just as we were led by amazing leaders to have our own independent Israel, we believe that Green Horizons alumni will lead the way for a greater future for our state,” said Eisikovits.
Communal Independence
JNF-USA’s partners – its donors – have invested hundreds of millions of dollars to build the physical infrastructure that supports Israelis moving from the country’s crowded center to the less-populated Negev Desert and Galilee. Yet, just as important as the physical infrastructure is the social infrastructure – the young families that play in the parks, live in the houses, drive on the roads, and work in the regional economic centers, all made possible by JNF-USA’s philanthropic investments. Organizations like MAKOM are supporting grass roots communal activism while strengthening Israel’s social fabric.
As JNF-MAKOM Liaison, Shosh Mitzman puts it, MAKOM is the needle that sows the rich tapestry of Israeli communities together. “Israel is a diverse country, incorporating people of all faiths, ethnicities, beliefs and interests, said Mitzman. “Community independence provides locals with opportunity to make their piece of Israel what they want it to be. MAKOM's pioneers are working every day to be the change they want to see in their community. MAKOM's mission, in building community independence, is to create an Israel where everyone can find their niche and be a part of building a better tomorrow.” 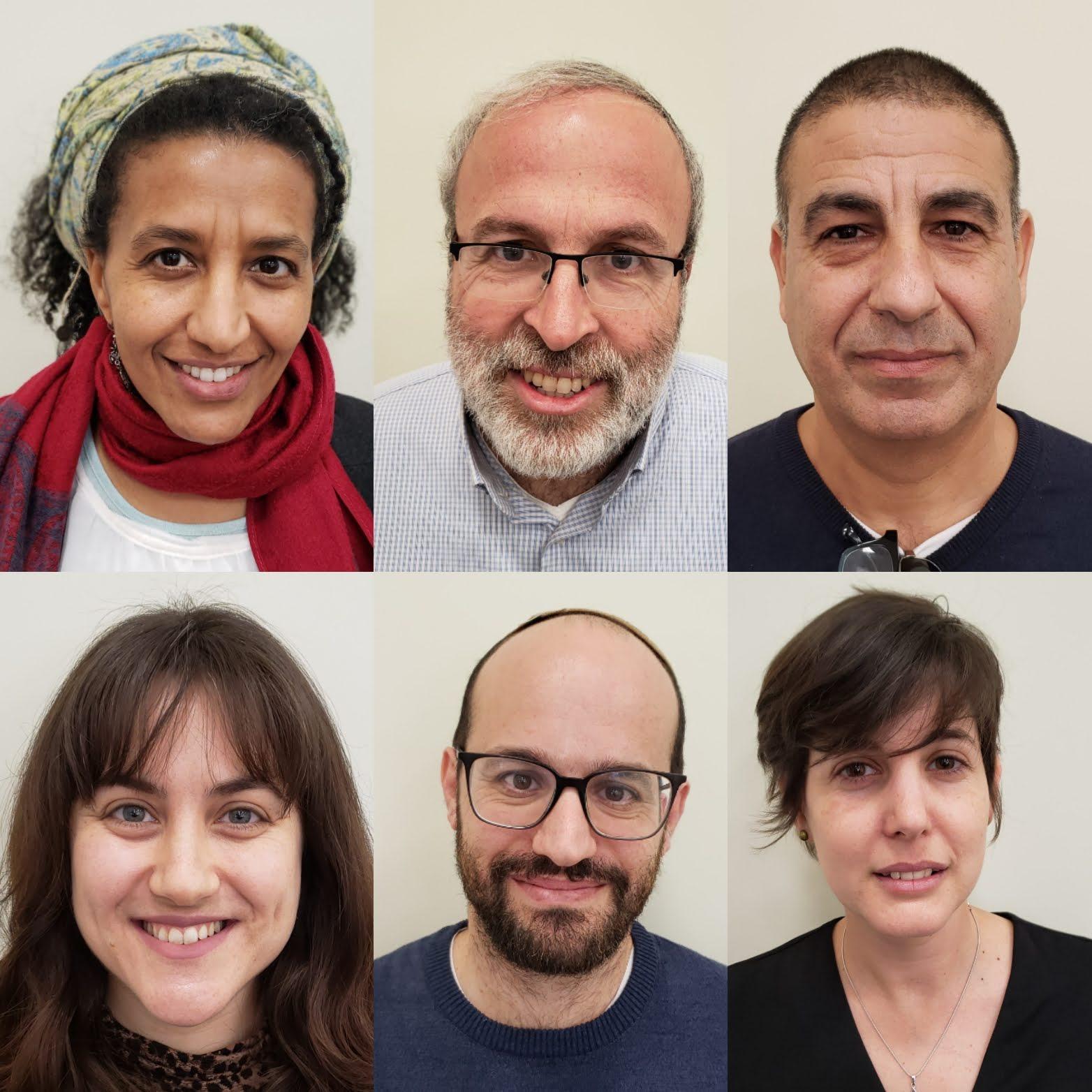 The multicultural faces of MAKOM (Courtesy: JNF-USA)
On Tuesday night, as Jewish communities around the world transition from the solemnity of Yom Ha’Zikaron to the jubilance of Yom Ha’atzmaut, Israelis will reflect on what it means to be independent in their ancient homeland, albeit in their own unique way, and most likely from their living rooms.
A list of immediate needs required by Jewish National Fund-USA’s affiliate organizations can be found at jnf.org/immediate needs. To support Israeli small businesses and artisans, visit jnf.org/shopping.
Jewish National Fund-USA is supporting a worldwide celebration of Israel’s Independence Day on Wednesday, April 29, from 2:00 pm US ET. For more information, visit jnf.org/ondemand.