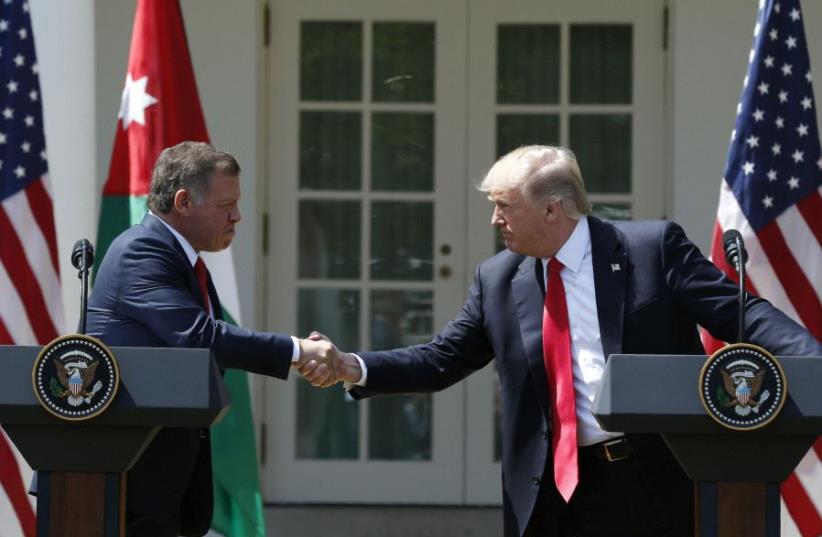 US President Trump greets Jordan's King Abdullah II during joint news conference at the White House
(photo credit: REUTERS)
Advertisement
US President Donald Trump and Jordan’s King Abdullah II spoke by phone on Friday to discuss the Temple Mount crisis, with the king expressing his appreciation of Trump’s support and “the important role that the US administration played to help contain the Aksa Mosque/Al Haram Al Sharif crisis.”“His Majesty also stressed the importance of intensifying coordination to avoid the recurrence of such crises and preserve the historical and legal status quo at al-Aksa Mosque/Al Haram Al Sharif,” Amman said in a statement.A White House readout of the call from Amman described the crisis as “contained,” despite continued Israeli fears that protests could continue at the holy site for a third week.The president’s son-in-law and senior adviser, Jared Kushner, spoke on the phone with Abdullah last weekend as the crisis was at its peak – when Israel was standing its ground on the implementation of new security measures on the holy plateau, as riots were raging in the streets and spreading to Arab capitals. Those measures have since been rescinded.The White House was more opaque in its readout of the call, simply stating that the president and king spoke of “the events that transpired in the region over the past two weeks.”“Both leaders said they were encouraged by the efforts taken to de-escalate tensions and by the progress that has been made,” said the White House press office. “They pledged to continue to stay in close communication. President Trump also emphasized Jordan’s important role in regional security.”On Friday, King Abdullah tweeted: “Appreciate @ POTUS, US administration active engagement to defuse Al Haram Al Sharif crisis. Coordination remains key to avoid further crises.”According to the Jordan News Agency, Abdullah on Saturday spoke with journalists in Amman about the Temple Mount crisis, explaining that Jerusalem and the Palestinian issue, in general, was a top priority for Jordan.His country, Abdullah said, had a historical, political and legal role to play in stopping the “Judaization of holy sites.”It was important, he said, for all parties to work together to ensure that the status quo on the Temple Mount was respected.Aside from the Temple Mount, Abdullah has had harsh words with regard to the July 23 incident in which an Israeli security guard at the embassy in Amman, killed a Jordanian teenager who attacked him with a screwdriver.The attack occurred while the youth was moving furniture into the guard’s apartment next to the embassy in Amman. The building’s owner Bashar Hamarneh, who was a bystander to the incident, also was killed.The embassy staff, including the security guard and Israel’s ambassador to Jordan, Einat Schlein, left Jordan on July 24. Israel is examining the incident, and the offices of the state prosecutor and attorney- general have asked all parties to hand over all relevant material.Jordan has contested the security guard’s diplomatic immunity, and the country’s attorney-general has indicted him in absentia with murder, according to The Jordan Times.Abdullah said Saturday that his government would work to ensure that justice was served. Two days earlier, he demanded that Israel put the security guard on trial. He was particularly upset that Prime Minister Benjamin Netanyahu had embraced the guard as a hero after his return to Israel.Abdullah said Netanyahu’s behavior was “provocative on all fronts and enrages us, destabilizes security and fuels extremism.”Protesters gathered near the Israeli Embassy in Amman on Friday to protest the incident, with scores chanting “Death to Israel” and calling for the expulsion of the Israeli ambassador and scrapping of an unpopular peace treaty with Israel.