The Knesset State Control Committee Chairwoman Shelly Yacimovich stated that there are an estimated 20,000 civilian drones in Israel, and only 1.4% of them are registered with the government. 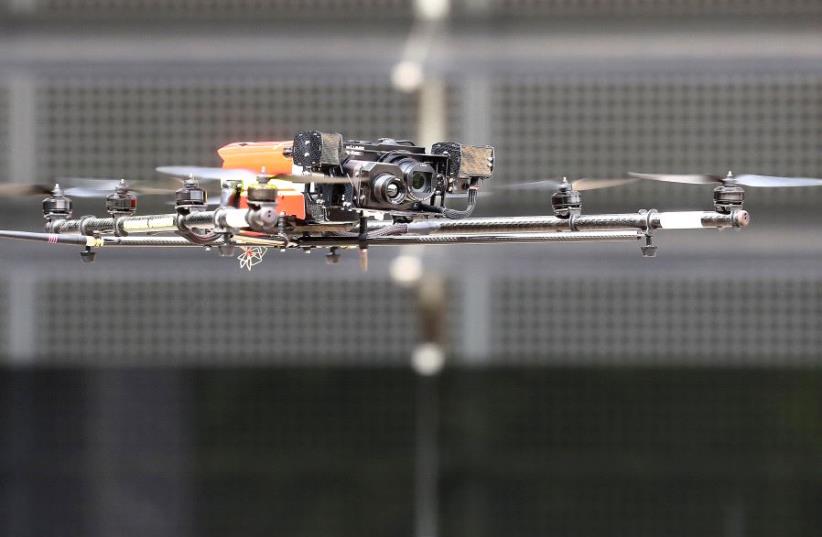 A firefighters drone is pictured during a drone workshop in Berlin, Germany June 27, 2017
(photo credit: HANNIBAL HANSCHKE/REUTERS)
Advertisement
The Knesset State Control Committee chairwoman Shelly Yacimovich (Zionist Union) questioned whether the government is ready to fight potential threats from the use of civilian drones for terrorist or criminal ends, during a panel meeting on Monday.“It’s greatly important that we are discussing the insufficient preparedness for the drone threat when it comes to security matters...before God forbid a tragedy happens,” Yacimovich said. “We don’t want to wait for an event, God forbid, after which people will come and say, ‘where were you?’”There are an estimated 20,000 civilian drones in Israel, and only 1.4% of them are registered with the government, she stated. The rest are not under any kind of regulation.The State Control Subcommittee on Security Matters, whose meetings are closed to the public, already debated the matter, but the confidential status was removed from most of the State Comptroller’s report on civilian drones, allowing a more open discussion.
The government has yet to decide who is responsible for defense against drones inside the country - the police or the IDF – so no one is doing the job, the report states. In addition, there is no formal regulation for registering and licensing drones.Yacimovich said: “The fact that a report was submitted, it’s revealed to the public and the media is discussing it will serve as a catalyst for a Security Cabinet meeting, and I allow myself to say that this committee meeting today may also be such a catalyst.”
The committee chairwoman added that the government’s responses to the matter thus far have not been satisfactory, especially because the existing laws relating to civilian aircraft were passed long before the advent of drones.“It is unreasonable in my eyes that after two and a half years of work at the National Security Council (NSC), now they’re saying that it’ll take another six months to decide if there’ll be regulation or not. Are you taking into account that there could be a terrorist attack? Why are you so slow?” Yacimovich asked, calling on the government to pick up the pace.State Comptroller’s Office department for security matters manager Brig.-Gen. (res.) Yossi Beinhorn said, that on December 12, 2017, Ben-Gurion Airport shut down for 15 minutes because a drone entered its airspace. In May, a drone entered the landing strip at Sde Dov Airport in Tel Aviv and endangered an airplane, while in January 2016 a helicopter and a drone just missed crashing each other. In 2016, there were 24 drone-related security incidents; the numbers are not out yet for 2017.Deputy NSC chairman Eitan Ben-David said recommendations were submitted to the government in June, but Prime Minister Benjamin Netanyahu asked the NSC to look into more factors, and those answers were given to the Security Cabinet last week.
The NSC recommended having the IDF be responsible for defending the borders and the West Bank from drones and the police within sovereign Israel.“This is the first time the police is accepting responsibility for the drone threat, and that is not a trivial matter,” Ben-David said.IAF Col. A.M. said that the air force began preparing for the drone threat in 2016, before the government made a decision on the matter, and it already coordinates with the Shin Bet and police.The IAF “set aside significant manpower, within its limited resources. This has a part of the security budget, and responses are on track,” he said.A police representative said drones present a range of threats, from violating privacy to smuggling weapons and other possible terrorist attacks, and therefore, various security bodies have tried different ways to work together. One of the steps that must be taken is for drones to be registered at the time of purchase, and technological developments allowing them to be identified in the air.
Several guests in the committee pointed out that most drone owners buy them for fun, or to take interesting photos, and aren’t trying to threaten anyone.Eyal Yaffe of the Environmental Protection Ministry said that “drones allow the ministry to supervise and prevent the use of dangerous chemicals. It is a helpful tool. In light of this, the ministry wants to form a unit that will advance the use of this tool.”