The petition has been issued by the T’ruah organization, the New Israel Fund, J Street and others and asserts that the law “disenfranchises Israel’s minorities,” among other offenses. 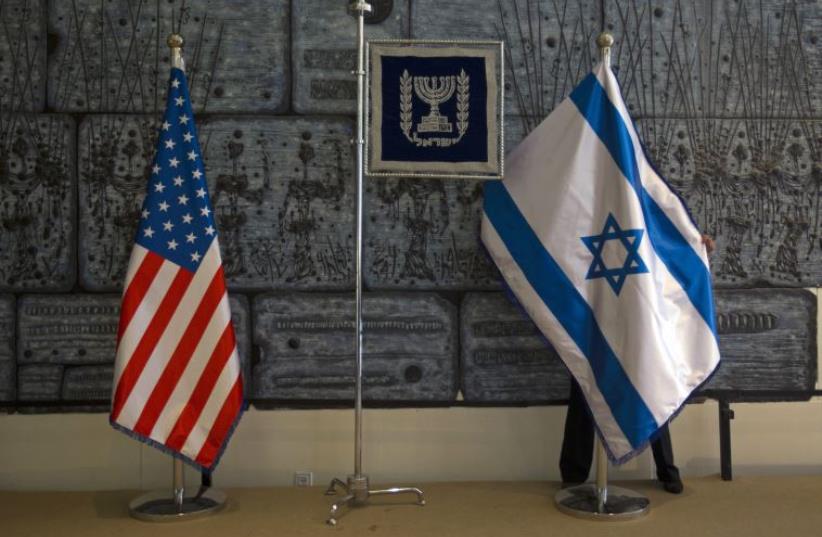 An employee arranges an Israeli national flag next to a U.S. one
(photo credit: REUTERS)
Advertisement
Several prominent US left-wing Jewish organizations have issued an online petition calling on people to pledge to ask MKs who backed the Nation-State Law speaking in the US to explain their backing for the legislation.The petition has been issued by the T’ruah organization, the New Israel Fund, J Street and others, asserting that the law “disenfranchises Israel’s minorities,” discriminates against non-Orthodox Jews, makes Israel an illiberal democracy and that there was no threat to the Jewish character of the state justifying the legislation.Suggested questions include asking the MKs if they believe in equal rights for non-Jewish citizens of Israel and if they do “why did you vote for the nation-state bill, which pointedly disenfranchises Israel’s minorities – and never once uses the words ‘equality’ or ‘democracy’?”Another suggested question is “Can you explain what you perceive to be the threat to Israel’s Jewish character that necessitated this new law?” Another proposes asking MKs if they understand why the bill “alienates the majority of American Jews, damages their connection to Israel and weakens overall support for Israel in the United States.”The Nation-State Law has faced heavy criticism from several quarters with opponents arguing that because the law talks specifically about Jewish national rights and symbols including the importance of “Jewish settlement,” the omission of language regarding democracy and equality of all citizens endangers the rights of non-Jews.Speaking to The Jerusalem Post, Deputy Minister in the Prime Minister’s Office MK Michael Oren of Kulanu strongly rejected the claims of the petition that the Nation-State Law is discriminatory and insisted that Israel’s democracy was alive and well.Oren said that the rights of minorities are grounded in the Basic Law: Human Dignity and Freedom as well as “many other laws,” and pointed to recent protests against the legislation, particularly one in Rabin Square in Tel Aviv where a group of Arab demonstrators chanted inflammatory slogans against the state.He added that “It would not have hurt the law to mention our commitment to human rights, but I don’t think its absence vitiates the law or turns it into a document ending Israeli democracy, or spells the end of Israel’s democracy or the advent of Israeli fascism or apartheid or all the other nonsense being said.”“All you have to do is walk through the country [and] go to shopping malls, hospitals and know there is no apartheid,” said Oren.“All you have to do is spend a day in Knesset, where Arab member after Arab member gets up and basically impugns and refutes the very existence of the Jewish state and you’ll know we have democracy,” he continued, arguing that no member of Congress would ever speak about their country, flag or anthem the way Arab MKs speak about Israel and its national symbols.Oren said that he had had “reservations” about the law but worked to have changes made, particularly to a clause that would have allowed the establishment of exclusive communities on a religious basis.Nevertheless, he said the law was not about equal rights, which are established in other laws, but about national rights.“The Arabs, Palestinians and others have no national rights here. They don’t have [the] right to [national] self-determination – that is reserved for Jews.“They have self-determination in 21 countries in the Middle East, not in this one. If you had national rights recognized for non-Jews, you’d have an Arab state in the Galilee and an Arab state in the Negev. Very quickly.”Likud MK Amir Ohana, who chaired the committee which dealt with the Nation-State Law, described the petition as “lies and falsehood,” and insisted that there is no right held by any citizen – that existed before the law was passed – that no longer exists.“We have the Basic Law for Human Dignity which says Israel is a democratic state in the spirit of the Declaration of Independence,” he said, adding that the Nation-State Law includes nothing discriminatory “in terms of civil rights and human rights between Jews and non-Jews.”Ohana said, however, that the state until now lacked a law talking about the identity of the state.“Why did we come here 70 years ago and before? Why did people come here from Russia, Morocco, Yemen, Iraq, Poland, and so on? To create a democracy? They came to establish a Jewish state, where the flag, symbols, anthem, holidays [and] language belong to [the] Jewish people.“There are 21 Arab states. Can’t the Jews also have their own state?”