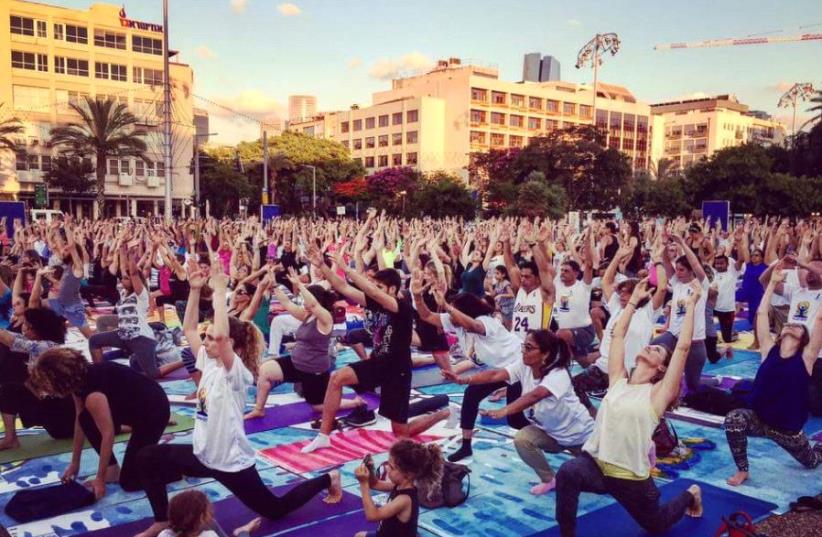 Participants take part in a communal yoga event in Tel Aviv to mark International Yoga Day, June 21 2017
(photo credit: ARSEN OSTROVSKY)
Advertisement
Hundreds of yoga enthusiasts stretched, pulled and lunged on colored mats in the Israeli city of Tel Aviv on Wednesday to celebrate International Yoga Day.Some 1,500 mats printed with artwork depicting Israel's future were laid out for the event in Rabin Square."This is the third International Yoga Day and we have basically an amalgam, a mix of all different yoga schools here in one place," said volunteer Yuav Yenen.Other mass yoga sessions were held in China, Colombia, the United States, Mexico, Paraguay, Italy, Singapore and atop Machu Picchu, a 15th century Inca citadel in Peru.Indian Prime Minister Narendra Modi joined 50,000 people in an outdoor yoga session in Lucknow.Modi has pushed for the annual event to be celebrated worldwide, promoting a lifestyle industry that has grown up around the ancient physical and spiritual discipline that is estimated to be worth around $80 billion.
Watch below as Israel celebrated International Yoga Day in Tel Aviv's Rabin Square on Wednesday.Thousands of Israeli yoga enthusiasts joined together in Tel Aviv to celebrate the activity.The sport has gained considerable interest in recent months in Israel, with Tel Aviv becoming one of the global yoga hubs.

How to upload your photos
via million eyez