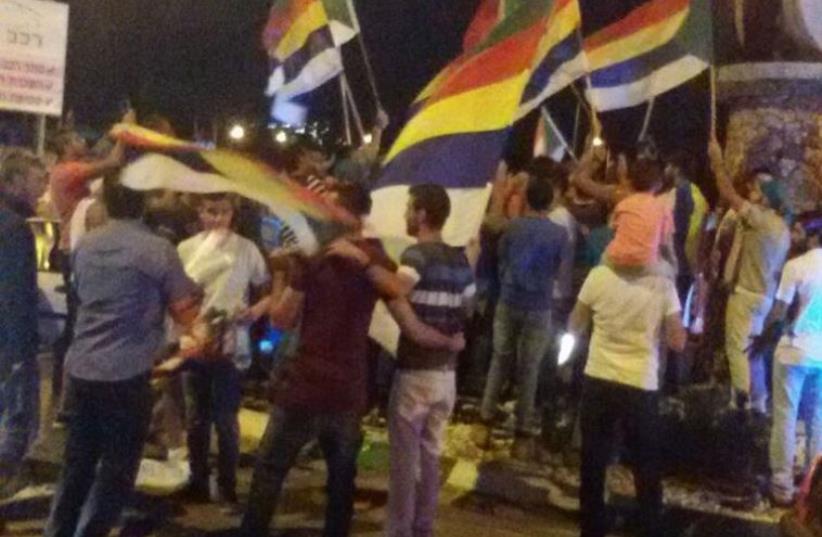 Druse protest in Northern Israel.
(photo credit: JABER HAMUD)
Advertisement
An IDF ambulance carrying people wounded in Syria was attack by a group of locals outside the Druse village of Hurfeish, located in the upper Galilee, on Monday morning, who tried to block the vehicle in an attempt to check that it wasn’t carrying jihadi rebels, police said.Northern District police said the villagers threw stones at the ambulance and that as the vehicle fled the scene it was chased by two carloads of locals, but that the crew of the ambulance managed to arrive safely at the police station in Ma’alot. The ambulance was then given a police escort to the Western Galilee Hospital in Nahariya.No suspects have been arrested for attacking the ambulance, police said Monday.As the ambulance fled the scene it hit and injured a 54-year-old Hurfeish resident who was among those trying to block its path.Over the past two weeks, since reports have emerged of Syrian Druse killed by the al-Qaida linked Nusra Front in the southwest of the country, the Druse community in Israel has collected donations to send to Syria by way of Jordan to help their Syrian brethren. Druse leaders have spoken of widespread fears of an impending massacre of Druse by jihadis located in the Jabal Druse region of the country, and have called on Israel to provide assistance.Many Druse accuse Israel of assisting Nusra by providing medical assistance to Jihadis who arrive on Israel’s border seeking medical treatment, and have called for Israel to immediately stop the practice. The IDF maintains that their policy is to favor non-combatants and to provide assistance only to moderate rebel fighters. Dolan Abu Saleh, the mayor of Majdal al-Shams, a Druse town located on the Golan Heights, told The Jerusalem Post that Israel has a policy to give humanitarian aid to all injured and this could lead the state to give aid to its enemies, such as Nusra Front.“I trust Israel do the right thing with the Syrian Druse,” he said, adding that their Syrian brethren are not going through an easy time as is evident from their conversations with them daily.Mendi Safadi – an Israeli Druse who has served as Deputy Regional Cooperation Minister Ayoub Kara’s chief of staff, and who has traveled in the region and met with Syrian opposition activists, told the Post that attacking the ambulance “hurts the Syrian Druze in Syria.”“Israel knows what it is doing. People coming to Israel are not jihadists. It is not the role of the Druse to decide the state’s policy, but the elected government,” he said.Asked about conspiracy theories held by many Druse that Israel is cooperating with al-Qaida’s Nusra Front, Safadi responded that many Druse listen to Syrian regime media and are connected to related Facebook pages of President Bashar Assad’s government. These sources push the narrative that Israel is aiding Nusra Front and numerous Druse believe this. The Druse are following the media in order to follow what is going on with their family in Syria, he added.