Netanyahu should not build up 'impossible expectations' during Modi visit

Let’s be realistic. The ability and resources of a country of only 8.3 million people, with plenty of its own challenges to deal with, can only go so far. 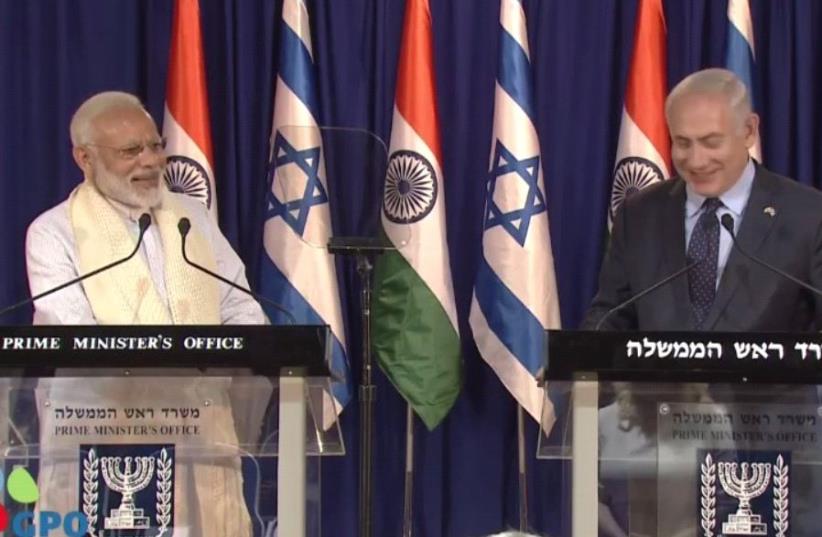 Indian Prime Minister Narendra Modi and Israeli Prime Minister Benjamin Netanyahu at Netanyahu's Jerusalem Residence, July 4, 2017
(photo credit: screenshot)
Advertisement
Prime Minister Benjamin Netanyahu has pretty much cleared his schedule for the next two days in order to spend as much time as possible with visiting Indian Prime Minister Narendra Modi.“Wouldn’t you?” quipped one senior government official in the reception line to greet Modi at Ben-Gurion Airport on Tuesday. “What would you rather do, accompany Modi or have to deal with the Reform movement?” The official was referring to the issue of a prayer space at the Western Wall that dominated Netanyahu’s attention last week.
Indian Prime Minister Narendra Modi arrives in Israel, July 4, 2017
One of the reasons leaders of the Reform and Conservative movements, as well as heads of the Jewish Agency, were so upset with Netanyahu over the Western Wall issue last week, was that – in their words – he kept promising that the compromise he pledged was just around the corner.Except that it was not. And when push came to shove, Netanyahu could not deliver the goods. He could not get his coalition – which leans on the haredi (ultra-Orthodox) parties – to go along with the compromise they themselves accepted in early 2016. He just couldn’t do it, and was faced with an ultimatum: either freeze the deal, or lose his government.He froze the deal, incurring the wrath of the leaders of large swaths of Diaspora Jewry.Although the issue of the Western Wall prayer space and the Modi visit seem worlds apart, there is a link: Don’t promise more than you can deliver; keep it real; manage expectations.Netanyahu likes to say that Israel is now a nation courted by many others, including countries with enormous populations, such as China, with 1.4 billion people, and India, with its 1.3 billion. Likewise, many smaller countries in Asia and Africa, he says, seek out Israel for its technology and expertise in fighting terrorism.At his speech to the heads of 15 African states in Liberia last month, Netanyahu spoke of his recent visit to China: “When I met President Xi in Beijing, he said to me, ‘You know, we’re crossing now 1.4 billion people.’ And I said, ‘Well, we’ve just crossed eight million.’ And he said to me, ‘Yes, but you’re a world power in innovation.’ A world power.”And there is what to be proud of. But don’t build up impossible expectations.In order to sustain growth, Modi said upon his arrival here, “India counts Israel as one of its important partners.”And the areas in which India is looking to Israel for help are many: from water management, to agriculture, to homeland security, to upgrading its military capacities.Modi has embarked on an ambitious plan to lift his nation to a new level, and he has identified Israel as a country that can help him do that. Which is flattering.But let’s be realistic. The ability and resources of a country of only 8.3 million people, with plenty of its own challenges to deal with, can only go so far.Netanyahu would be wise in not overstating what Israel has, or is able, to offer – either to the Indian leader or to the heads of African states he now meets on a regular basis. Otherwise, and despite his best intentions, he may end up with angry and disappointed customers.Just ask Rabbi Richard Jacobs, the president of the Union for Reform Judaism.