Israel’s venture capital community is beginning to truly discover India and its enormous potential not for just the IT sector, but also for many different hi-tech fields. 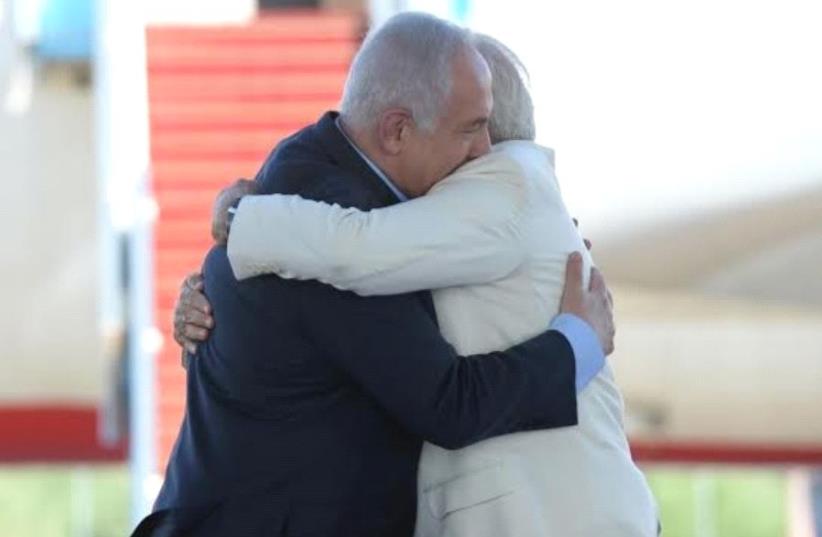 Prime Minister Benjamin Netanyahu greets Indian Prime Minister Narendra Modi upon his arrival in Israel, July 4, 2017
(photo credit: HAIM ZACH/GPO)
Advertisement
As the hi-tech sectors of Tel Aviv, Bangalore and Silicon Valley continue to blossom, a group of Indian- American entrepreneurs hope to build a robust triangle to connect these three hot spots.“Maybe we could envision an Israeli investor putting money into a company in India that sells to the US market through an office in Silicon Valley,” M.R. Rangaswami, a Silicon Valley-based software executive and investor, told The Jerusalem Post on Monday. “Or it could be the opposite – an Indian-American investor who invests in an Israeli company and sells stuff to India.”
M. R. Rangaswami
Rangaswami is among 15 Indian- American business leaders visiting Israel in parallel with the historic arrival of Prime Minister Narendra Modi to the country. Their trip was organized by the Indiaspora organization in conjunction with the American Jewish Committee.Over the next few days, the delegates will meet with Israeli and Indian accelerators, venture capitalists, incubators and entrepreneurs, with hopes of cementing future partnerships among the three countries.“Maybe someone this week will end up investing in an Israeli startup – this gets the ball rolling,” Rangaswami said.In addition to his role as founder and president of Indiaspora, which seeks to transform the success of Indian-Americans into meaningful impact in India, Rangaswami is the co-founder of Sand Hill Group, one of the first angel investors in Silicon Valley.While the Tel Aviv-Bangalore-Silicon Valley network that Rangaswami and his colleagues envision would be a virtual framework, physical interactions among investors and start-ups from each side would be critical to future work together, he explained.“There’s a lot of entrepreneurial potential in all these groups,” he said. “There have been many successful role models to follow as well.”In Silicon Valley alone, one out of every three start-ups has an Indian- American co-founder, and Indian- American CEOs serve at Microsoft, Google and Adobe, Rangaswami added.Though the Indian-American members of the Indiaspora delegation are interested in many potential areas of collaboration, of particular interest are Israeli innovators who specialize in the cybersecurity sector, according to Rangaswami.“That’s a hot sector – everybody is curious,” he said. “Our whole delegation is curious about the work Israeli companies and venture capitalists are doing in this space. It’s an important thing for us, important for India, so it’s an obvious choice.”Arun Kumar, who served in the Obama administration as assistant secretary of commerce for global markets, likewise emphasized the mutual benefits of working together in such a triangle for innovation.
Arun Kumar
“There is tremendous potential in the connection between Silicon Valley, Tel Aviv and Bangalore – more broadly, between Israel, India and the US, particularly in areas of innovation tech and entrepreneurship,” Kumar, who is now chairman and CEO of India’s KPMG, which specializes in risk, financial and business advisory, said on Tuesday.Kumar stressed that parties could benefit from increasing the number of Indian students studying at Israeli universities, as well as from connecting the start-up ecosystems and incubators in all three places.Kumar said that as he takes part in his first trip to Israel this week, he is particularly eager to see such connections made in areas like digital health, agriculture and irrigation.“It’s going to be a journey of discovery – things can’t be done in one trip,” he added.Jason Isaacson, the American Jewish Committee’s associate executive director for policy, who has been working for years to promote Israeli-Indian relations, said on Tuesday that the potential between the countries is “almost unlimited.”
Jason Isaacson
“It clearly is a natural fit between Israel and India,” Isaacson said. “It’s really a trilateral fit – Israel, India and the United States – in terms of hi-tech, in terms of the entrepreneurial spirit, in terms of the high value given to innovation.”Israel’s venture capital community is beginning to truly discover India and its enormous potential not for just the IT sector, but also for many different hi-tech fields, according to Isaacson.“We’re on a threshold of an entirely new chapter for Israel and India,” he said.Simultaneously, Isaacson explained, the US also needs hi-tech partners – people who can help the economy grow and provide a solution for the shortage of engineers in the hi-tech community.“But frankly, as Israel grows in different sectors and as India grows in different sectors and as the US continues to be the world leader, the synergistic possibilities are immense,” Isaacson said.