On a quest to micro-irrigate India’s small farms 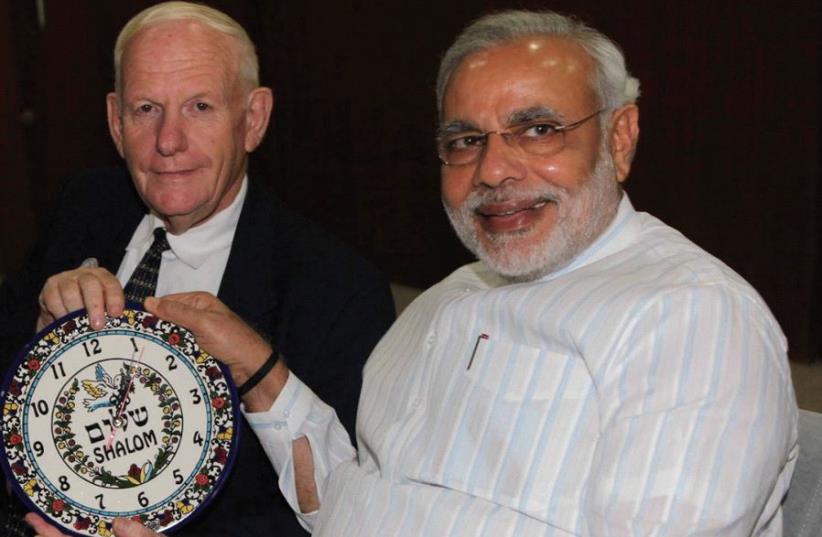 AMNON OFEN, director of NaanDanJain Irrigation, presents a clock to Narendra Modi in 2013 when he was chief minister of Gujarat.
(photo credit: Courtesy)
Advertisement
As the vast Indian agricultural market continues to thirst for efficient water supplies, Israeli companies are trailblazing the path to bring affordable micro-irrigation to small-scale farmers.Since the two countries established relations in 1992, the turnover of drip irrigation projects launched by the Israeli private sector in India has grown from $1 million to more than $1 billion – at a scale that one of the industry’s leaders describes as nothing less than an “agro revolution.”In anticipation of Prime Minister Narendra Modi’s visit to Israel this week, Amnon Ofen, director of NaanDanJain Irrigation Ltd., spoke with The Jerusalem Post on Sunday about the future of the ever-growing and increasingly critical sector.“We are giving holistic solutions and this is what the farmer needs,” he said.NaanDanJain has been focusing, for the most part, on bringing drip irrigation to small-scale farmers who each have less than one acre of land, Ofen explained.Originally established on Kibbutz Na’an as NaanDan, Naan- DanJain was fully acquired by India’s Jain Irrigation Systems Ltd. in 2012 in a $100m. deal.All in all, Israeli companies occupy some 50% of the global drip-irrigation market and about 75% of the Indian market – with NaanDanJain and Jain claiming about 50% in India and Netafim approximately 25%, Ofen explained.He attributed that success to the “holistic and integrated approach” Israeli companies have adopted in “tackling irrigation as a system.”Such a system, he said, typically includes the drip irrigation itself; all associated infrastructure; and a water-soluble fertilizer, or “fertigation” mechanism.Offering a “one-stop agro shop” also means providing professional training for the farmers, connecting them to often scarce water resources and installing tools such as solar-powered water pumps, he explained.“When we come to the small Indian farmer, we give all the input he needs,” Ofen said.Today, about 15 million Indian farmers are benefiting from the use of drip irrigation, according to Ofen. Meanwhile, both the federal and state governments have joined forces to help farmers subsidize 50% of the cost of the systems, he explained.Although Israeli drip-irrigation companies have had particular success penetrating the enormous Indian agricultural sector, much more work in this field is yet to be accomplished.Due to the sheer size of the farming industry, drip irrigation still accounts for less than 3% of irrigation, with most farmers still relying on wasteful and inefficient flood irrigation methods, Ofen explained.Modi’s administration, he said, is working to bring those figures up to 20% in the next decade.“India is suffering from scarcity of water,” Ofen continued.“There are states in India like Tamil Nadu and Punjab that have no water.”In attempt to help solve this issue, NaanDanJain and its mother company Jain are now launching projects that not only aim to implement drip irrigation, but are also bringing water sources to groups or villages of farmers whose areas were previously dry.Over the past few months, the firms have launched two such projects across about 100,000 acres in Rajasthan and Karnataka, with 15,000 farmers participating in the latter alone, Ofen said. The companies have gathered farmers into groups of water associations by building secondary water reservoirs that each group of about 100-200 people can access.“Such projects from source to resource are the ultimate solution from the joint activity between India and Israel,” he said. “This will enable us to do a big, holistic project.”With Modi’s visit to Israel in the background, Ofen expressed his hopes that the two countries would soon sign a joint agricultural financing protocol to facilitate quicker and easier business transactions.Future mega-projects between Israeli and Indian partners in the sector could potentially reach thousands of farmers, enabling more Israeli companies to participate in such ventures, he added.Although government- to-government partnerships might be important, Ofen stressed his opinion that the future of India’s agriculture lies in the hands of the private sector –where Israelis have long been doing business successfully.“The results are proven,” he said.