In the dreadful heat, squads from the 50 Battalion of Nahal, were training for urban combat in several houses under construction in the northern West Bank.

Nahal urban warfare training with paintball guns in Samaria
Advertisement
A soldier peered around the corner of a concrete building.“We can go this way,” he said to his comrade standing behind him. The terrorists were in a building in the next yard, 50 meters away. Their commander thought the decision was wrong for the moment.“Wait, come back inside.” 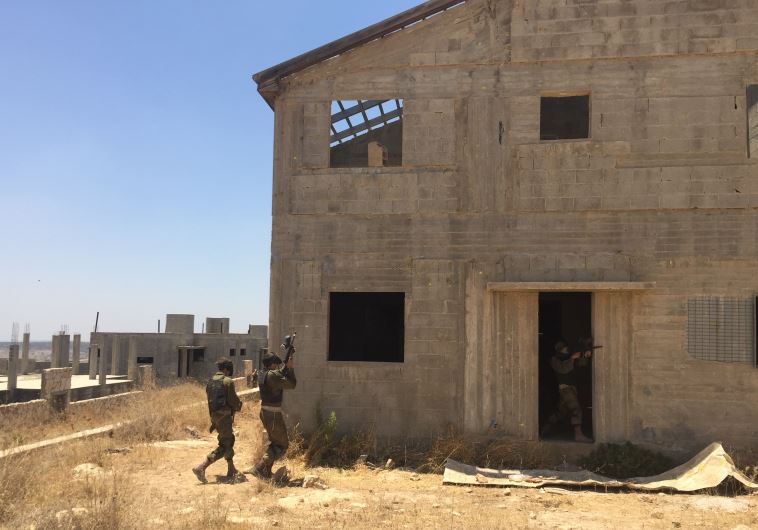 In the dreadful heat, squads from the Nahal Brigade’s Battalion 50 were training for urban combat in several houses under construction in Samaria.After a year in the army and three months of service in Hebron, these soldiers knew the drill. But in this special weeklong training exercise they were escaping the routine and training both in open country and in house to house fighting for an enemy more sophisticated than the lone-wolf Palestinians carrying out stabbings in the West Bank.Using paint ball guns, an expensive luxury for training, gave a unique feel to the mock combat.“This is a very important week,” explained Sec.-Lt. Nir Dinar. “When you deal with day to day routine you may lose your abilities and this is important because it allows us to train, learn and develop organically as a unit.”Many of the members of this Nahal unit did a year of pre-army community service with different organizations.For Sharron Lachman, a 20-year-old, the work in the community beforehand gives the men special cohesion.His comrade Yosef Getahun agrees that working in communities in Israel helped give the unit purpose before being drafted for combat duty.To prepare for the training, five soldiers playing the role of terrorists were positioned in two concrete houses. The houses here will eventually be for Jewish families moving to Samaria, but for now they were a canvas for paint balls and men in boots to clomp through. “It’s not a war today against regular forces, everything has changed,” says Capt. Nadav Day, a commander in the unit who served in the 2014 war in Gaza. “The terrorist wants the fight to be one on one, his weapon against yours, not against a whole unit.”He describes the hypothetical Hamas terrorist who seeks to draw the IDF into a house, neutralizing the firepower and technological advantage of the army. “It’s like Thermopylae,” referring to the battle in 480 BCE when 300 Spartans fought a Persian army of 100,000 by forcing the Persians to fight in a narrow strip of land.“So we concentrate four soldiers for each enemy, we have other weapons as well, such as tanks and missiles.” He wants the soldiers to use the training to study how to be most effective in a built up area or in open country.The 20-man unit makes its way up a ditch as the exercise begins. Each soldier carries 120 paint ball ‘bullets’ in his canister. It’s less than the 180 bullets they would carry in the field, says one man. 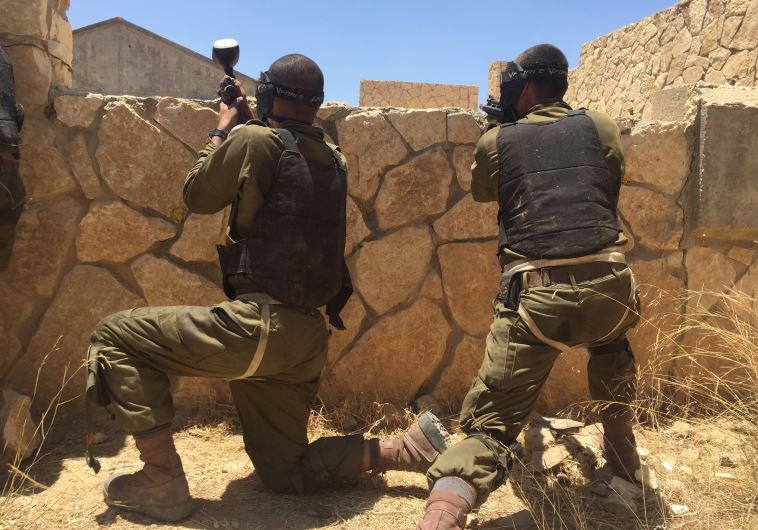 Covering behind a rock wall they exchange fire with the “enemy” in the house.After several minutes the men rush a rear entrance and clear the building. Now the speed with which they’ve moved slows down.Some men deploy to the roof and continue the firefight with the enemy. Several are hit with paint balls. One officer gathers some of his sergeants to confer on the best way to get from one house to another.After around 20 minutes the men agree to move around the house on its right side, creeping behind a wall and engaging the five “enemies” who are “killed” one by one.To the viewer it seems slow.But the officers see a successful training with mistakes that can be corrected. “In Gaza we might remain in a house for a day,” says one of the commanders.“War is slow.”The officer also notes that the kinds of threats a modern army faces, such as enemy snipers, rocket-propelled grenades, Cornet missiles, and improvised explosive devices all pose a threat. For each threat the IDF is preparing its own way to overcome it, training for the next war, and learning from the last.