The initiative was created in 2014 to assist lone soldiers in army and immigration issues. 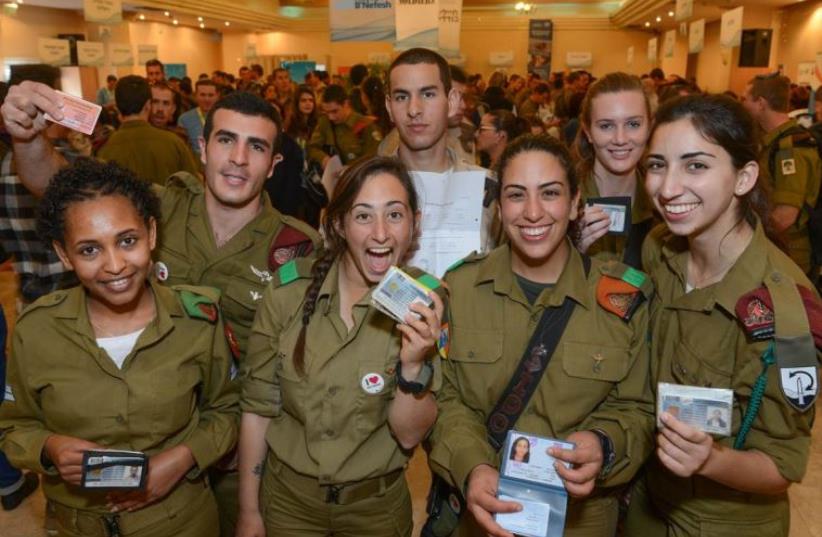 HAPPY LONE SOLDIERS at Thursday’s ‘Yom Siddurim’ event sponsored by Nefesh B’Nefesh and Friends of the IDF.
(photo credit: SHAHAR AZRAN)
Advertisement
Errands are always more fun when shared.This was obvious Thursday when more than 1,500 lone soldiers from 40 countries came together for the annual Yom Siddurim event (National Personal Planning Day) during which more than representatives from some 40 government offices set up booths so all of their personal matters could be taken care of under one roof.“It’s basically a one-stop shop for governmental offices and legal and financial advisers,” said Noya Govrin, director of the Lone Soldier Program at Nefesh B’Nefesh. “It’s a day where lone soldiers can make all their arrangements, but it’s also a day where friends can meet friends. It’s a whole reunion, but also it’s very practical.”Created in 2014 by Friends of the IDF and Nefesh B’Nefesh, both of which assist lone soldiers in both army and immigration matters, the day started in response to the sentiment expressed by many lone soldiers that they are unable to take care of their countless personal matters in the time usually allotted by the army.The concentrated setup of this event, however, makes the task more manageable by providing administrative assistance for personal matters that otherwise would involve multiple visits to various governmental offices.“Yom Siddurim minimizes the time and energy these brave lone soldiers spend attending to personal errands, enabling them instead to focus on the remarkable privilege of protecting and serving our country,” said Rabbi Yehoshua Fass, co-founder and executive director of Nefesh B’Nefesh.Yuval Hadari, a lone soldier from New York City, said he loves the opportunity to catch up with old friends and take care of business at the same time.“I love when they bring all the lone soldiers together because I get to see all my friends from the different battalions and brigades in the army. I just love to catch up with everyone, it’s just the best part of coming here.“So far I’ve gotten it organized to get the roof fixed in my room, because it’s leaking, and a grant to help me get more money for my monthly rent. As things pop up, I always remember that there are more things to do. Everyone here has been so nice, people love helping lone soldiers and it feels amazing.”Sydney Ryan, a search and rescue combat sergeant and lone soldier, agreed.“To most people, they think being a lone soldier is a sad thing like ‘Oh, they’re alone, they have no family,’ but its actually the exact opposite. I love Israel, I’ve never felt less alone in my entire life.”MK Oded Forer (Yisrael Beytenu) made a special visit to witness the event and talk to the soldiers.“I want to hear from the soldiers what their problems are, and I’ve heard some of them and want to try and deal with them in the Knesset,” he said.“Sometimes lone soldiers have difficulties renting apartments because people don’t want to rent to them, which is unfortunately a common thing. I don’t like things like this happening. It’s important that we meet lone soldiers face to face, and hear their problems.”