It is estimated that upwards of 125,000 Israelis live in the settlements just outside of Jerusalem.

Ma'ale Adumim Mayor Benny Kashriel speaks after Prime Minister Benjamin Netanyahu visits the city (Tovah Lazaroff)
Advertisement
Prime Minister Benjamin Netanyahu pledged his support for the Greater Jerusalem bill, which is tantamount to a de-facto annexation of 19 West Bank settlements around the country's capital, including Ma'aleh Adumim.“This place will be part of the state of Israel,” Prime Minister Benjamin Netanyahu said on Tuesday during a visit to the city of over 38,000 people."I support the Greater Jerusalem bill that will allow Jerusalem to develop in many ways," Netanyahu said of the legislation. It was authored by Likud MK Yoav Kisch and advanced by Transportation Minister Yisrael Katz. Netanyahu spoke of the bill as he sat first with business leaders and then with the Likud faction, which held a special meeting in Ma’aleh Adumim."I am weighing placing Ma'aleh Adumim within the boundaries of Greater Jerusalem within the context of the Greater Jerusalem bill," Netanyahu said.
Israeli politicians talk about possible annexation of West Bank settlement of Ma"aleh Adumim, October 3, 2017. (Tovah Lazaroff)
He pledged to build 4,000 new homes in the city, largely on an undeveloped lot on the city’s edge, next to the Mishor Adumim Industrial park."We will intensify the momentum to develop Ma'aleh Adumim. We will build thousands of housing units here. We will add the necessary industrial areas and the expansion necessary to enable the accelerated development of this place," he added.He further stated that he would advance plans for 4,000 new homes in West Bank settlements after the holidays.“This is an historic moment,” Katz told The Jerusalem Post after the meeting, adding that he planned to bring the bill to the Ministerial Legislative Committee for Approval within the first two weeks after the Knesset opens its fall session.If approved, the legislation would place 19 settlements, including those of the Gush Etzion region and the Givat Ze'ev settlement, within the boundaries of a newly created metropolitan area for Jerusalem. The new governmental concept for Jerusalem is modeled is based on the existing structure of greater metropolitan London. The West Bank settlements around Jerusalem would retain their autonomy but would have voting rights in the city's mayoral race.Ma’aleh Adumim Mayor Benny Kashriel added that there were would be a joint municipal committee that would deal with issues of transpiration, tourism and medical centers.It is estimated that upwards of 125,000 Israelis live in the ring of settlements just outside of Jerusalem. The bill would also create independent municipalities for some 100,000 Israeli-Arabs that live within Jerusalem's municipal borders but are located outside the security barrier.After the meeting city Mayor Benny Kashriel said, “Netanyahu promised us, that Ma’aleh Adumim is like a legal part of Israel. The building will continue in this city, because this city is very important for the security of Jerusalem, the capital city of Israel.”Deputy Foreign Minister Tzipi Hotovely said that along with Katz, she had also supported the Greater Jerusalem bill and was pleased that Netanyahu had publicly pledged to support it.The impact of the legislation, Hotovely said, “means applying Israeli law on Ma’aleh Adumim and on Gush Etzion, that surround Jerusalem. The is the most important thing to make sure that everyone will realize that Jerusalem will remain united.”MK Yehuda Glick said that Likud faction that was held in the city already made a statement that Ma’aleh Adumim is part of Jerusalem. 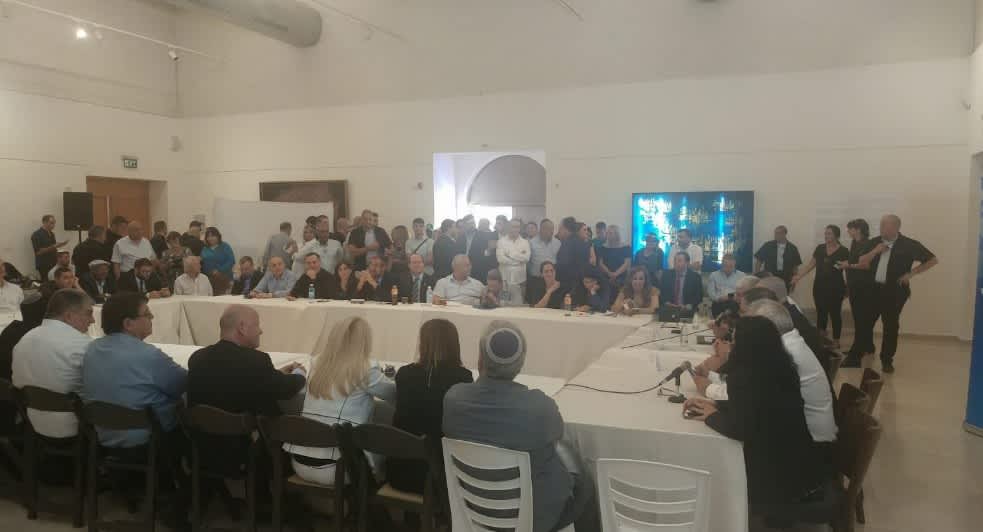 Likud party members hold a faction meeting in the West Bank settlement of Ma'aleh Adumim (ARIK BENDER/MAARIV)
“All that is around here, that is part of Jerusalem, part of Israel. We are going to accelerate significantly, the building here. The prime minister announced today that we will invest many millions of dollars, billions of shekels here, to enlarge and widen the roads here, to add more building here. “That is the beginning of the right way, to implement Israeli law over all of Judea and Samaria,” Glick added.Glick said the issue of E1 was not raised at the Likud faction meeting. E1 is an undeveloped part of the city on the opposite side of Route 1. The US and the international community have pressured Israel not to build in that area, out of concern that such building would prevent the creation of a viable Palestinian state.For the last 23 years all prime ministers since Yitzhak Rabin onward have promised Kashriel to build in E1, but none have.Kashriel told the Jerusalem Post that Netanyahu privately made that pledge to him during this visit as well.