Eichler Clause in Public Broadcasting Law likely to be repealed by Knesset. 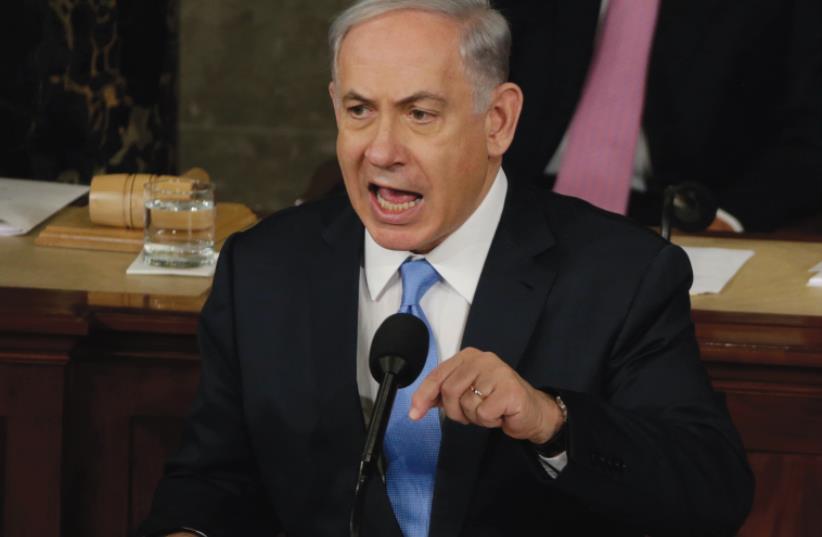 BENJAMIN NETANYAHU addresses a joint meeting of Congress in the House Chamber on Capitol Hill in Washington in March.
(photo credit: MARC ISRAEL SELLEM)
Advertisement
Prime Minister Benjamin Netanyahu who is also Minister for Communications announced on Friday that he will work towards amending a controversial clause - banning the expression of personal opinions on air - that  was inserted into the Public Broadcasting Law by United Torah Judaism MK Israel Eichler, during the second reading of the amended bill on Thursday.Zionist Union MK Nachman Shai who opposed the so-called Eichler clause then, will motion on Sunday for it to be rescinded, and there is a strong likelihood that this will happen given the flurry of anger and concern that it has aroused. The clause and its potential repercussions caused enormous consternation in Israel’s media community which has long accused politicians of trying to gag journalists who are attempting to live up to their professional role which is to keep the public informed.In an announcement issued by the Prime Minister’s Office, it was stated that the prime minister does not believe that journalistic ethics should be governed by law, but rather by moral considerations.Israel Radio veteran current affairs anchorman and news reporter Arye Golan, early on Friday morning interviewed Likud Minister Ophir Akunis who is responsible for the Israel Broadcasting Authority and the transition to the new Israel Broadcast Corporation which is intended to replace it. In an effort to defend the clause, Akunis said that it had been misinterpreted, but after Golan kept pressing the point and citing examples of how there were already rules in place with regard to journalistic ethics, Akunis conceded that perhaps the clause was improperly worded and would have to be amended.Golan was curious as to whether an amended bill which had already been passed could once more be amended and Akunis said that he would consult later in the day with the Knesset legal adviser to see how the matter could be rectified.Akunis said that the clause was not meant to prevent journalists from expressing their opinions, but it was more in the nature of guaranteeing balance, aside from which it was only an interim clause until such time as the public council overseeing the Israel Broadcast Corporation would determine the ethical rules under which the IBC will operate.Eichler, a former journalist himself, who was also interviewed by Golan, confirmed that it was an interim clause and not intended as a means of muzzling the media. What he was trying to achieve he said, was to keep personal opinion out of news reports. His own haredi community was frequently the butt of unilateral opinion he charged, ad was often silence by the media. But his frustrations were not limited to the haredi community alone.  His hackles had risen he said, when he heard a report that Beduins have the most traffic accidents.“But what can we do if it happens to be true?” Golan respondedGolan also interviewed Israel Press Council President Dalia Dorner, a retired Supreme Court Justice, who characterized the clause as very problematic and  stated that it was formulated in haste without proper legal oversight. It should be annulled, she said.  The subject is so important she added, that it should be opened up for public debate before any legislative move is made.  Aside from that, she pointed out the code of journalistic ethics is already enshrined in the Press Council’s articles of association.Similar sentiments were expressed by Yohanan Plesner, a former MK who is currently president of the Israel Democracy Institute.