Today, the pathway utilizing the bridge is called the “Mehadrin Bridge,” meaning it is only to be used by men, while the other approach to the site can be used by men and women. 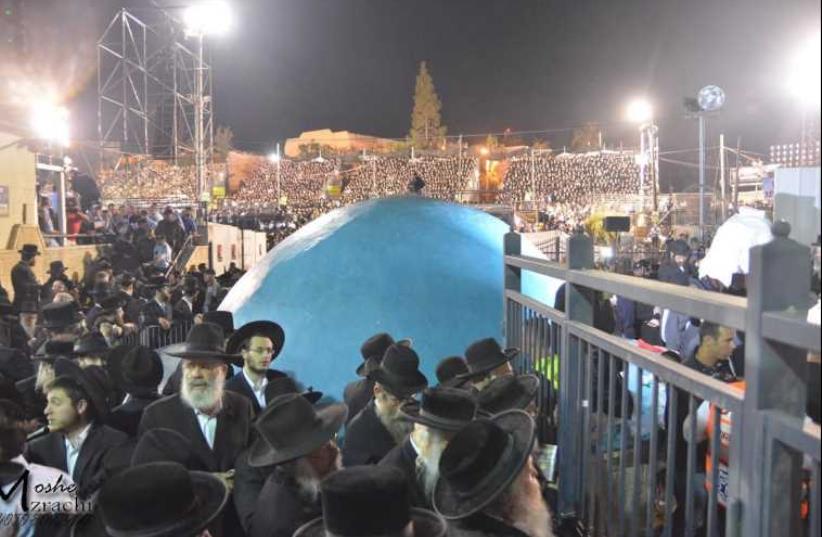 Lag Ba'omer festivities draw tens of thousands to Mt. Meron‏.
(photo credit: MOSHE MIZRACHI AND AVRAHAM ZEMACH/OR HARASHBI SPOKESPERSON)
Advertisement
The Center for Women’s Justice has called on the Religious Services Ministry to prohibit gender segregation at the approaches to the site of the tomb of the Talmudic sage Rabbi Shimon bar Yochai on Lag Ba’omer.Every year on the minor holiday of Lag Ba’omer, tens of thousands of people, mostly from the haredi (ultra-Orthodox) community, flock to the tomb, adjacent to the town of Meron, to commemorate the anniversary of the death of the revered rabbi.Massive crowds are formed in the areas leading up to the site, and since 2012 a temporary bridge has been constructed for the celebrations to provide an alternative route to from the parking lots to the tomb itself.The pathway utilizing the bridge is called the “Mehadrin Bridge,” meaning it is only to be used by men, while the other approach to the site can be used by men and women.The men-only path was instituted due to the haredi community’s adherence to gender separation in public forums and events.The Center for Women’s Justice argues that since public funds are used to construct and dismantle the bridge every year, the formal separation of men and women is illegal.Last year, the organization requested that the Religious Services Ministry, which has administrative oversight over the compound, ensure that women were not prevented from using the bridge.The ministry agreed, saying that women would be able to access the bridge route. The Center for Women’s Justice says however that the “Mehadrin” route was however gender segregated last year, and called again on the ministry to prevent the phenomenon recurring.“According to what we have been told by the management of the National Center for the Development of the Holy Places, which is responsible for managing the Lag Ba’Omer events, there is not and will not be anything preventing women accessing this route and it will be open to all,” wrote the group’s legal adviser, attorney Yisrael Pat.He added that a notice would be placed on the bridge saying that it is open to all users.“The separation of, and discrimination against, women in the public domain is forbidden by law, and tax-payers money should not be used for such discrimination” said the Center for Women’s Justice director Dr. Susan Weiss.“If someone thinks that there is an unsolvable problem regarding modesty when going to Meron on Lag Ba’Omer he does not have to go the site if he does not wish. There is however no legal or ethical option of discriminating against women in a public place.”