On September 25, 1950, The Jerusalem Post reported on the final airlift of Yemenite Jews to Israel - continue for the original report.

By JPOST.COM STAFF
SEPTEMBER 25, 2017 12:48
Front cover of The Jerusalem Post featuring Operation Magic Carpet, September 25, 1950
(photo credit: Courtesy)
Advertisement
Exactly 67 years ago, Israel concluded its secret airlift operation to bring Yemenite Jews, faced with violence, to the Jewish state. Named "Operation Magic Carpet," 45,000 of the 46,000 Jews in Yemen were flown to Israel on 380 flights.Despite dangers, the thousands of Jews made their way to the capital of Yemen, Aden, in order to reach the recently-founded State of Israel.This is The Jerusalem Post's report from the day that Operation Magic Carpet concluded:Last Flight Of Magic Carpet - September 25, 1950by Hugh Orgel, POST Staff ReporterTEL AVIV, Sunday - The Magic Carpet came to rest at Lydda Airport tonight. When Shlomo Sirri, from Sana'a, stepped out of the Near East Airline plane shortly before 10 o'clock, the airlift from Aden, which has brought 47,140 Yemenite Jews to Israel since the end of 1948, was officially closed.About 8,000 Jews are now thought to be left in the Yemen, and a small Jewish Agency staff has been left in Aden to deal with them as they arrive at the Hashed camp. They will be brought to Israel whenever sufficient numbers have gathered.The two aircraft which wound up the operation landed at Lydda within ten minutes of each other, bringing 177 passengers, including 64 Habanim and 18 members of the Jewish Joint Distribution Committee camp staff. Among those gathered at the airfield to meet them were the two Chief Rabbis of Israel, Dr. I. H. Herzog and Rabbi Ben Zion Hai Uziel; Government, Jewish Agency and Joint officials; former workers at the Hashed camp and representatives of the Yemenite community. 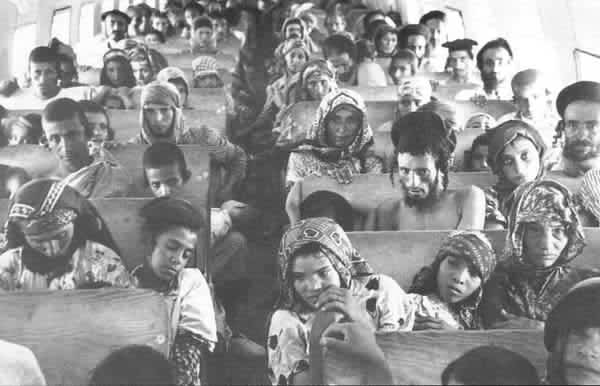 Yemenite Jews on a plane to Israel during Operation Magic Carpet (Wikimedia Commons)Hundreds of GuestsThe planes parked close to each other near the special hut used as immigration office for the airlife and the space between them quickly filled up with the hundreds of guests come to see the end of the Magic Carpet. With health formalities completed aboard the planes, the first Yemenites of the last trip came hesitantly out of the aircraft onto the darkened field, which was lit only by the dim lights of the airport buildings and an occasional flashbulb of a press cameraman. The narrow passageway was forced between the waiting crowd, and the newcomers were escorted through to the offices, where they squatted on the ground surrounded by their belongings. Some of the new arrivals on this final trip had been among the first to arrive at Aden, but had stayed on there until the end, to help with the camp arrangements.They were greeted enthusiastically by the former camp staff with whom they had worked many months and who had come to see them arrive. The Chief Rabbis sat on a bench at the foot of the stairway, and many of the Yemenites kissed their hands as they came past.Jewish immigrants from Yemen in a tent encampment in 1949 as they are visited by Israeli nurses. (Reuters)The Habanim, totally different from the Yemenites, stepped out of the plane waving and shouting "Shalom" to the crowd below. They formed up beside the aircraft with almost military discipline and marched to the offices, their short red and white skirts swinging like Highlanders' kilts.An earlier group of 24 members of the Habanim tribe from the Hadhrmouth arrived at Lydda direct from Sana'a by a Yemen Airways plane, last week.Mrs. Lorna Wingate, who arrived from London earlier in the evening, stayed at the airport to watch the Carpet complete its operations. She is to attend the foundation stone ceremony of the Wingate Youth Village on Thursday.Other stories featured by The Jerusalem Post on September 25, 1950:

JNF Pledges Full Redemption: The Jewish National Fund... reaffirmed that it would continue to work for the full realization of national redemption of the soil and the firm establishment of the State.

Diplomatic Circles Believe Soviets Will Remain in UN: Fears that Russia might demonstratively walk out of the current session the UN have vanished almost entirely in diplomatic circles.

UK Papers Oppose Communist Ban: The left-wing "Reynolds News" today urged Britain not to heed the voice of those who wished to ban the Communist Party.