On This Day: The Israeli flag is formally adopted

The original version of the Israeli flag had been used as the symbol of Zionism since 1897.

On this day in 1948, the State of Israel formally adopted the Israeli flag as we know it today to be the nation's official flag.

The Israeli flag with its two blue stripes and a Star of David in the middle is a variation on the flag that had been used by the World Zionist Organization since 1897.

The blue stripes were inspired by the tallit, used during prayer. It also had the Star of David and the word Maccabee on it. The idea for the design is traditionally believed to have come from David Wolffsohn who came up with the idea during a Zionist meeting with Theodor Herzl in Basel.

The flag and variations of it were used as a symbol of the Zionist movement for the years following the Basel meeting and by the British army's Jewish Brigade Group alongside the Union Jack during World War II.

On May 14, 1948, The State of Israel declared independence. The flag that had symbolized Zionism for 50 years and would later that year become the nation's official flag was displayed on the stage flanking a portrait of Herzl. 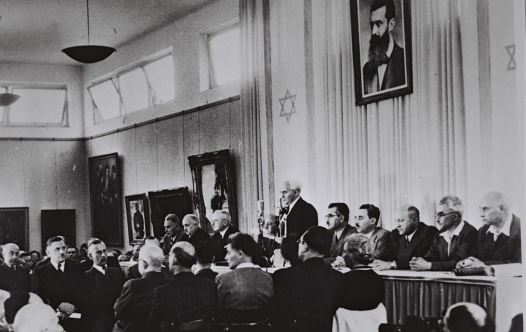 David Ben-Gurion, flanked by the members of his provisional government, reads the Declaration of Independence in the Tel Aviv Museum Hall (credit: GPO)

When the State of Israel was formed, the question came up whether or not the symbol of the Zionist movement should become the official Israeli flag. The dilemma continued to be discussed for six months and was resolved 73 years ago on October 28, 1948, when a notice was published in the Official Gazette, officially adopting the Israeli flag. The notice specified how the flag would look with exact measurements.

The flag has since served as the symbol of the Jewish nation.