The Star of David, called the "Magen David" in Hebrew, is a modern symbol of Judaism and the Jewish people. It is the central symbol on the national flag of Israel. It can be traced back to the medieval era where it was used for decorations, ornaments and protective amulets. Not until the 17th century did the hexagram begin to represent the Jewish community as a whole.

Vaccinating Against the Virus of Anti-Semitism - analysis

Described as the world’s oldest disease, anti-Semitism is increasing along with COVID-19.

Twitter users found themselves locked out of their accounts after using the Star of David in their profile images.

The shape and color of one of the stickers embodies the so-called "Jewish Star" patch that Jews had to wear in Nazi-era Germany and its occupied territories.

The victim was treated in a local hospital for cuts and bruises to his face. Police are searching for the assailants.

The first-team All-American, who is forgoing his senior year at Alabama to enter the pro draft in April, later tweeted an apology to anyone who found his necklace offensive

“Irrespective of motive, there is still an impact when religious symbols are painted on someone’s home,” he said.

The World Zionist Organization has made an almost identical replica of the cloth that covered the coffin at his burial in Israel to be revealed on Tuesday.

He appeared to argue that the use of the Star of David "even if it depicts the state of Israel committing human rights violations” is antisemitic and antisemitism has no place. 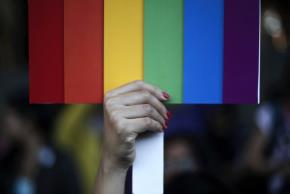 The controversy over the DC Dyke March, Jewish stars and Israel, explained

LGBTQ, Jewish and feminist organizations called Wednesday night on the DC Dyke March to apologize for their ban on the Jewish Star of David and Israeli flags.

Activists are using a star that has the words “No Vax” in Hebrew-stylized letters on social media, while others are wearing yellow stars at events.

1 Yair Netanyahu: The rise of the son
2 Moderna's chief medical officer explains why their vaccine is better
3 75% of US Jews voting for Biden in US presidential election
4 20% of verified coronavirus patients did not develop immunity
5 European Jewish population at lowest share for a millennium and declining