Inspired by terrorist attacks in capital, boy says he intended to kill Jews with kitchen knife to become ‘martyr.’ 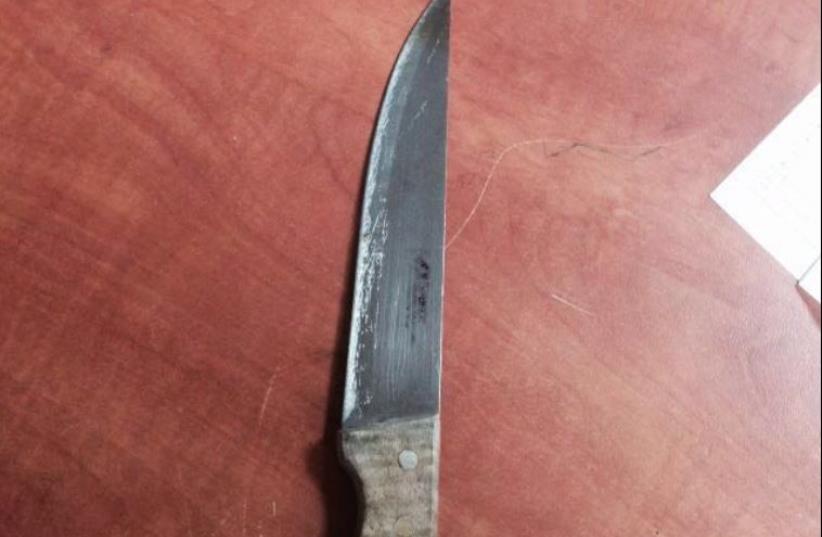 Knife found on Palestinian youth in Old City of Jerusalem, February 1
(photo credit: POLICE SPOKESPERSON'S UNIT)
Advertisement
A 15-year-old Arab boy from northeast Jerusalem’s Shuafat neighborhood was indicted for attempted murder on Sunday for planning to stab Jews in the Old City earlier this month.According to the indictment by the Jerusalem Magistrate’s Court, the unidentified teen decided to carry out the attack last Tuesday to become a “martyr,” after being inspired by Palestinian media coverage of recent stabbing attacks in the capital, and by a friend who carried out a stabbing the previous day.Following morning prayers, he took his school bag and a large kitchen knife he stole the night before and traveled to the Muslim Quarter to find a civilian or officer to murder, the indictment stated.Knowing that his school bag would likely be searched by security personnel, the boy hid the knife under his pants, by his hip.Shortly after arriving at the Damascus Gate at approximately 8:30 a.m., the boy chased a Jewish man with the knife drawn, the indictment stated. The man was able to escape uninjured, at which time the teen entered the Old City to stalk a different victim.Noting his unattended school bag on Hagai Street, police patrolling the area asked witnesses whether they knew to whom it belonged. They then approached the boy, who behaved suspiciously, the indictment continued.The boy claimed he was going to school and opened his bag to show its innocuous contents. Still, his behavior caught the attention of other officers in the area who conducted a full body search, at which time the knife was revealed.He was placed under arrest. During questioning, he confessed to planning to carry out a deadly attack near the same area where last October a terrorist stabbed to death Rabbi Nehemia Lavie and Aharon Benita, as well as critically wounded Lavie’s wife and two-year-old son.Upon being arraigned at the Jerusalem Magistrate Court, a judge ordered his remand.The boy is being charged with attempted murder and possession of an illegal weapon.