Already in March Paraguay indicated that it would relocate its embassy if Prime Minister Benjamin Netanyahu agreed to visit. 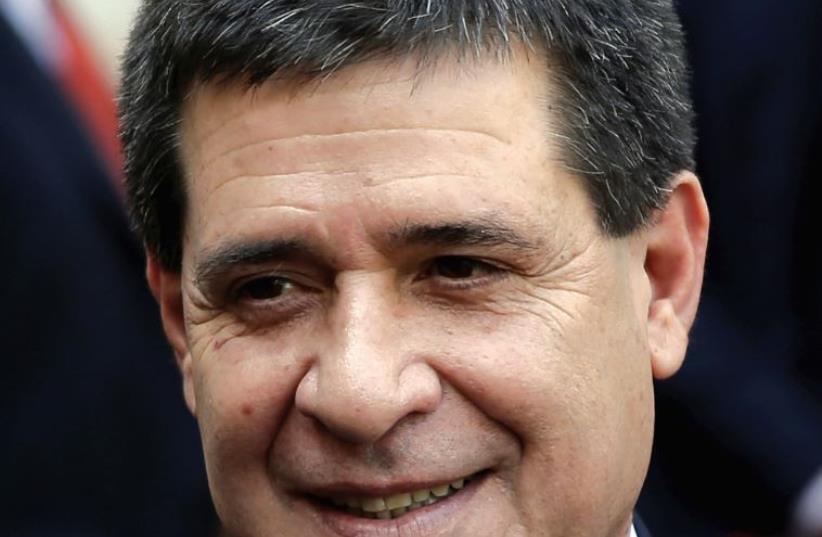 Horacio Cartes
(photo credit: ANDREA COMAS/REUTERS)
Advertisement
Paraguayan president Horacio Cartes pledged to relocate his country’s embassy from Tel Aviv to Jerusalem at a special celebratory event in Asunción to mark Israel’s 70th anniversary.Cartes said that he would like the move to take place before he leaves office in mid-August.Foreign Ministry spokesman Emmanuel Nahshon tweeted about the statement under the heading “good news.”But he later said that it was still unclear if plans to relocate the embassy were in the works.Already in March Paraguay indicated that it would relocate its embassy if Prime Minister Benjamin Netanyahu agreed to visit. Last September Netanyahu became the first sitting prime minister to visit Latin America, but he had not stopped in Paraguay.                         In December U.S. President Donald Trump made a dramatic shift in US policy toward Jerusalem when he stated that it was the capital of Israel and that he would move the country’s embassy there.The relocated embassy is expected to open in May. On Friday, Trump said that he may come to Israel for that event.“I may go. I am very proud of it. Jerusalem has been a subject that has been promised for many, many years by presidents. They all made campaign promises but they never had the courage to carry it out. I carried it out.”Guatemala is the only other country who definitely plans to follow through by opening its embassy in the capital in May just a day or two after the US.A few other countries have spoken of doing so, but final approvals for such a move have not been given. This includes Czech Republic, Romania, Honduras and Paraguay.The Czech Republic does intend to open an honorary consulate in Jerusalem but not an official embassy.The international community has largely opposed any declaration of Israeli sovereignty in Jerusalem, including west Jerusalem which is located within the pre-1967 lines.Still initially some 24 countries had embassies in west Jerusalem. But they relocated them after the Knesset’s passage in 1980 of the Jerusalem Law, which formally annexed east Jerusalem.The European Union has been particularly opposed to relocation of any embassies to Jerusalem, holding that this is something that should happen only after a final status agreement is reached for a two-state resolution to the Israel-Palestinian conflict.Both the Czech Republic and Romania are European Union states. They would be breaking with EU foreign policy should they relocate their embassies.The Czech Foreign Ministry explained last week, that it did not believe such a step was contrary to EU policy.“This step in no way prejudges the final agreement concerning Jerusalem, the same way as it is not being prejudged by diplomatic representations of several European countries that are seated in East Jerusalem,” it said.“The Czech Republic fully respects common policy of the European Union, which considers Jerusalem as the future capital of both the State of Israel and the future State of Palestine.”According to WAFA, the Palestinian news agency, EU foreign policy chief Fedrica Mogherini has said that none of the EU member states will relocate their embassies.