Despite the apology some Twitter users have called for a boycott of the franchise. 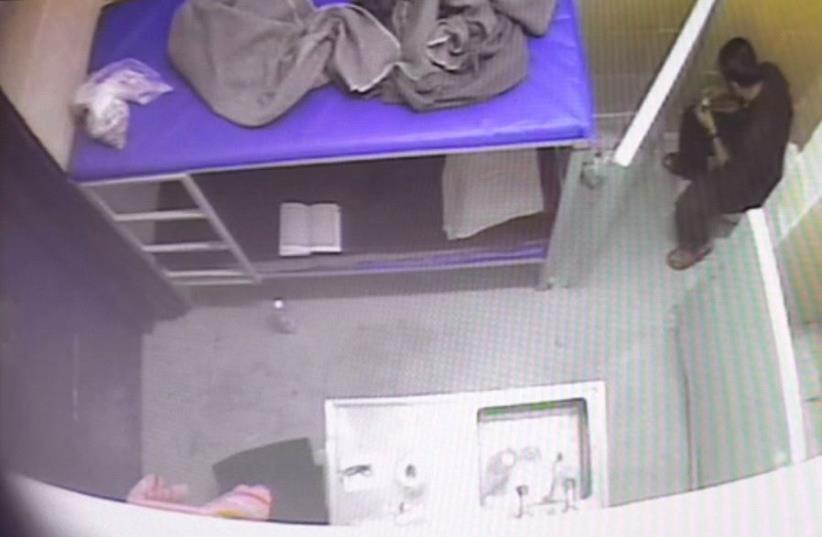 Imprisoned Fatah leader Marwan Barghouti eats in prison
(photo credit: ISRAEL PRISON SERVICE)
Advertisement
Pizza Hut International apologized for a post this week by its Israel branch making light of a hunger strike by Palestinian prisoners.After Marwan Barghouti was caught on tape breaking his hunger strike in HaSharon Prison, Pizza Hut Israel posted a screenshot from the video with a photoshopped pizza box and the caption: “Barghouti: If you’re going to break the strike, isn’t pizza better?”But the post created a firestorm and forced the international brand to apologize publicly. On its main Facebook page in both English and Arabic on Tuesday, the brand condemned the post. “Pizza Hut International apologizes for any offense caused by a recent post on Pizza Hut Israel’s Facebook page,” it wrote. “It was completely inappropriate and does not reflect the values of our brand. The local franchisee in the country removed it immediately and the relationship with the agency that posted it was terminated, and we truly regret any hurt this may have caused.” Pizza Hut Israel deleted the post from its page and offered a slightly less comprehensive apology. “It was intended to be a humorous post marketing Pizza Hut Israel’s delivery services,” it said, “and was removed after a request from the management of the international chain.” Barghouti has been in Israeli prisons since 2002, where he is serving five life sentences on terrorism convictions. Last month, he announced a hunger strike by Palestinian prisoners in a New York Times op-ed. But on Sunday, the Israel Prisons Service released video of him eating, among other things, a Tortit candy bar.
The revelation garnered a slew of jokes on social media about the classic candy bar as well as reports of increased sales. But unlike Pizza Hut, Strauss – which owns the Elite brand that makes Tortit – has no intention of stepping into the fray. “We didn’t do anything with it and we’re not going to do anything with it,” Gil Messing, a public relations representative for Strauss, told The Jerusalem Post on Wednesday. “We’re staying away from the entire conversation.” Messing said, while there have been several news stories on bumps in Tortit sales, Strauss hasn’t seen any effect. “We sell to retailers and retailers always buy very large quantities, so we wouldn’t know based on a day or two if anything has changed,” he said. “However I can tell you what we’ve heard from retailers is that there hasn’t been a serious change in consumption.” According to Yediot Aharonot, a tour this week of candy shops in the center of the country revealed that the snack bar was flying off the shelves. Mako TV also reported a “moderate” rise in sales at some local stores, without offering any data.Tortit is a wafer bar covered in almond cream. Some of its popularity can be traced to the fact that it is pareve – made without dairy or meat ingredients – and can therefore be eaten by kosher consumers after meat meals.Yediot said consumer data show Tortit has 6.7% of the candy bar market, second only to Taami, which has 9.4%. And in what seems to be an incredible marketing stroke of luck, Strauss launched two new ice cream flavors just a couple days before the Barghouti story broke – including a Tortit variety. “I can tell you from my experience, it’s a very small wave,” said Messing. “These things disappear as they come. We are more into strategic things, not something that happens right now and will soon disappear.”