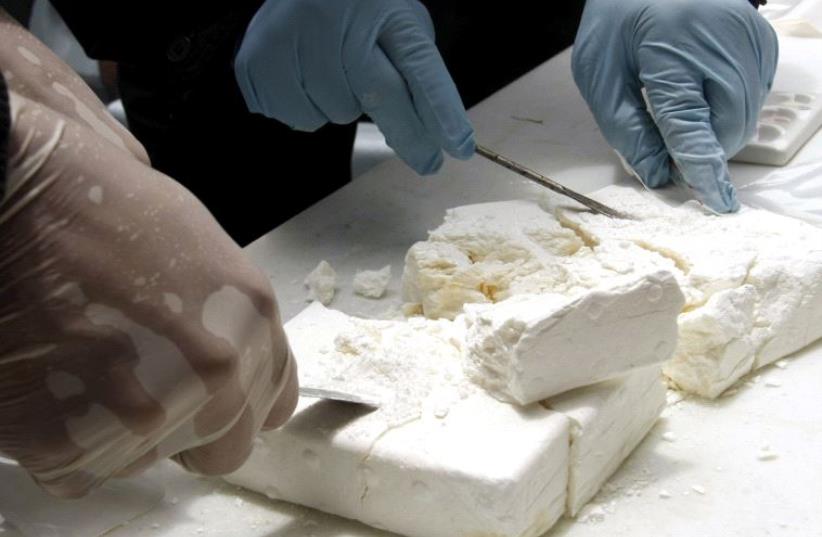 Cocaine
(photo credit: REUTERS)
Advertisement
The Israel Police has been investigating the biggest ever smuggling attempt of cocaine into Israel which took place a couple of months ago, and has reason to believe that the mastermind behind it is an Israeli crime lord who is currently operating from Dubai, N12 reported on Monday. Last November, Israeli media reported the biggest ever failed smuggling attempt of cocaine into Israel, when police located 750 kilograms of the dangerous drug stored in barrels and placed in a container at Ashdod Port. Initial findings indicated that the container made its way to Israel from Guatemala, Central America. Police then launched a covert investigation in an attempt to apprehend the involved criminals and to reach the planned destination of the shipment.  Then, earlier this month, the investigation led police to a second container with an additional 550 kilograms of cocaine, apparently another attempt by the same network. The drugs seized both incidents, weighing a total of 1.3 tons, reached the astronomical sum of over NIS 500 million. Police has since made several arrests, including of a 50-year-old known criminal in Ashdod and a 30-year-old greengrocer suspected of financing some parts of the attempted smuggling. However, following 10 days of interrogating the suspects and after the Ashkelon District Court extending their arrest several times, police failed to collect enough evidence to keep them incarcerated. According to N12, the suspects maintained their right to remain silent throughout the investigation, and did not say a word when confronted with each other, leading the investigation to a dead-end. The suspects' lawyers have claimed time and time again that their clients have nothing to do with the attempted smuggling. But a police official has indicated that the arrests made as part of the ongoing investigation have helped promote it, despite how it may seem. "It's now clear to us that the person who was involved behind the scenes in the attempted smuggling is not currently in the country," the source told N12. The police now believe that the mastermind behind the largest cocaine smuggling attempt into Israel is an Israeli crime lord known to police, who has recently left Israel and has been operating from Dubai in the past few months. While this case is unusual in its scope, attempts to smuggle cocaine into Israel is nothing new. In October last year, four Israeli citizens were arrested in Odessa, Ukraine, after smuggling around 120 kilograms of cocaine from Peru to Ukraine, which were expected to later reach Israel.