Instances of rock throwing were reported after tensions flared between Muslims and Jews on 'Jerusalem Day.' 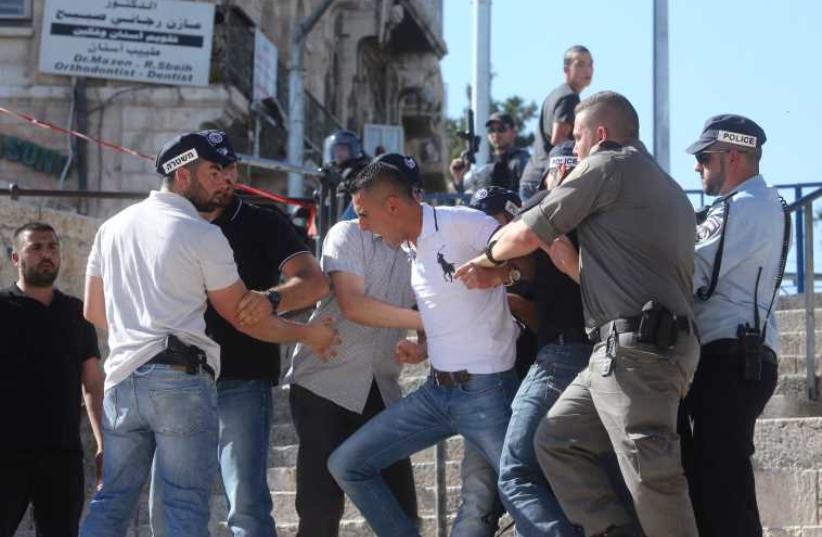 Clashes in Jerusalem
(photo credit: MARC ISRAEL SELLEM/THE JERUSALEM POST)
Advertisement
Clashes broke out Sunday afternoon between Muslim and Jews on "Jerusalem Day" near the Damascus Gate in the Old City,  resulting in the injury of one police officer.  Instances of rock throwing were reported at the Damascus Gate in the Old City of Jerusalem before police arrived to stop the violence using crowd dispersal procedures. Security forces detained two Muslim youths on suspicion of rock throwing following the skirmishes. The hurt police officer sustained light injuries to his head.The incident came on the heels of tensions that flared earlier in the day when Jewish visitors came to tour the Temple Mount in commemoration of  the so-called Jerusalem Day, which marks the anniversary of Israel's capture of east Jerusalem and the West Bank in 1967.Director of Al-Aksa mosque Sheikh Omar al-Kiswani said that earlier Sunday more than 160 "extremists stormed the squares of Al-AKsa in groups," according to Palestinian news agency Ma'an.Al-Kiswani added that tensions rose near the Chain Gate after groups of Jewish visitors began chanting religious songs and dancing in circles.Security forces also arrested two Arab youths in East Jerusalem in separate incidences. One youth, taken into custody in the Arab neighborhood of Issawiya, was accused of throwing rocks at security forces patrolling the area. No injuries were reported.The other, arrested in the contentious Silwan Valley, was taken into custody after he allegedly threw a rock that lightly injured a motorist driving through the area.