Haredim threaten to disrupt Friday’s event over the arrest of a draft dodger from their community. 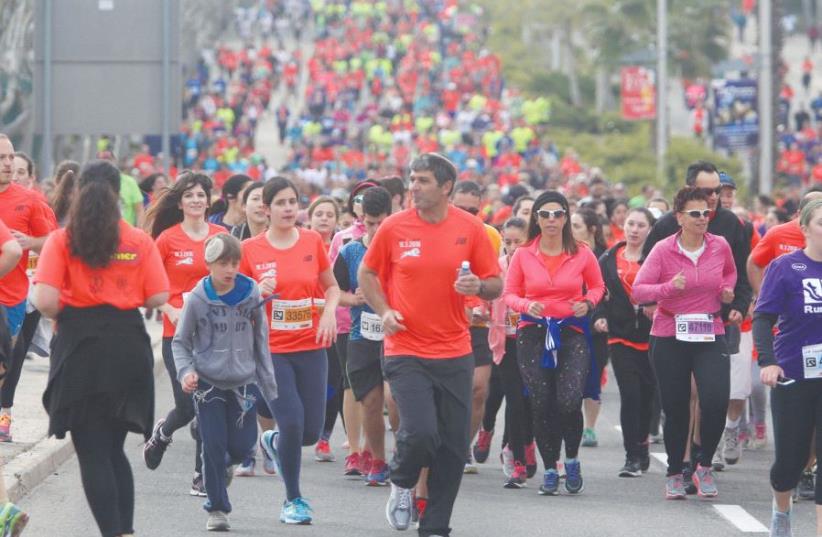 Runners in the 2016 Jerusalem Marathon jog uphill ahead of some 25,000 others who took part in the event
(photo credit: MARC ISRAEL SELLEM/THE JERUSALEM POST)
Advertisement
Security preparations for the seventh annual Jerusalem Winner Marathon – expected to draw more than 30,000 participants from across the globe – have been finalized, police said on Wednesday.Some 3,000 officers, working in coordination with the Jerusalem Municipality and private security personnel, will be on hand to monitor Friday’s event, which will begin at Gan Sacher Park at 7 a.m. and conclude at noon, police spokesman Micky Rosenfeld said.“Security assessments have been made, and all the roads along the route will be temporarily closed off to traffic,” he said. “Police and security guards will be stationed throughout the marathon area and surrounding neighborhoods to ensure the safety of the thousands of participants.”Rosenfeld noted that additional police units and emergency- services personnel, including Magen David Adom paramedics, will be on standby throughout the morning.Police have also prepared for haredi (ultra-Orthodox) threats of disturbances along the marathon route if a haredi IDF draft dodger, arrested Sunday for refusing to serve for over one year, is not released beforehand.The threat comes amid several ongoing violent riots in haredi communities over the conscription law, as well as the Monday removal by police of two IDF soldier dummies hung in effigy in the city’s ultra-Orthodox Mea She’arim neighborhood during Purim.The Committee for Saving the Torah World condemned the unidentified conscript’s arrest during the festival as “an escalation that demands a proper response.”According to numerous reports, the unidentified prisoner is a follower of Rabbi Shmuel Auerbach, a leader of Lithuanian haredi Ashkenazi Jewry, who has condemned the law and urges his followers to defy it.“If the court decides to go through with the proceedings [against the defendant], they will cause unprecedented chaos,” community activists warned in a statement, adding that members of the community will “seal the fate of the Jerusalem Marathon.”Rosenfeld said police are aware of the threats and will be ready to respond to any disturbances.“Security assessments will be made specifically regarding possible demonstrations carried out by members of the haredi community who have called to disrupt the marathon,” he said. “Police units will respond, if necessary.”Meanwhile, the leftwing NGO Free Jerusalem announced on Wednesday that it would hold a joint Israeli- Palestinian demonstration at the east Jerusalem intersection of Route 1 during the marathon to protest inequity on the 50th anniversary of the reunification of the capital.“Sporting and cultural activities in Jerusalem are not for everyone, and more than a third of the city’s population is living under occupation and without basic civil rights,” the group said in a statement.“The marathon presents Jerusalem as normative and cosmopolitan, especially in the view of many tourists,” the statement added. “However, the race’s route disrupts the lives of many Palestinians who, of course, do not participate in the marathon.”