Some African capitals have been signaling to Israeli officials a desire to deepen ties for several years, and are frustrated that Jerusalem has not responded faster. 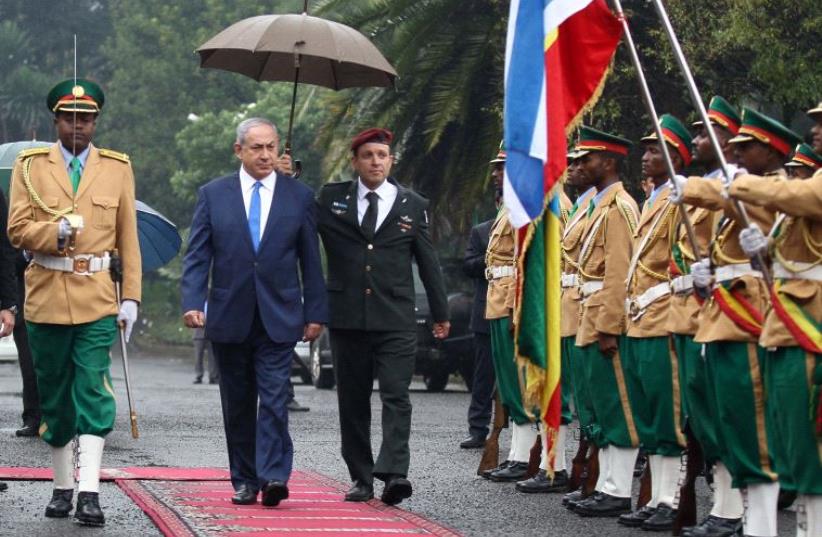 PM Netanyahu arrives in Ethipoia
(photo credit: REUTERS)
Advertisement
African nations are willing and ready to develop and expand their diplomatic and business relations with Israel, a spokesman for the ruling political party in the Ivory Coast said on Wednesday.Joel N’guessan, an official in the Rally of the Republicans party, headed by Ivorian President Alassane Ouattara, said in Jerusalem on Wednesday that the historical cause of the rupture in relations between Israel and African states was a result of political pressure imposed on them by Arab countries who dominated the Islamic world in the 20th century.Today, as that influence has waned, Israel is in a position to expand its diplomatic relations with African countries, but Jerusalem must show its intent by investing in the continent, he said.“In order for Israel to be supported by African countries in the UN, it is important for Israel not only to restore diplomatic relations with Africa, but there must be within Israel an evolution of a diplomatic effort to create investment in Africa,” said N’guessan.The official spoke during a press conference at the annual Feast of Tabernacles at the International Christian Embassy Jerusalem, which has brought numerous government officials to Israel for the festival, along with 5,000 Christian pilgrims.The comments follow the recent UNESCO resolution condemning Israel over its governance of Jerusalem and the Temple Mount, which ignored the Jewish history of the site.However, several African nations, namely Cameroon, Guinea, Ivory Coast, Kenya and Togo refused to back the resolution and abstained from the vote.The embassy, which is a strongly pro-Israel evangelical organization, says it has sent delegations to numerous African states in recent years and discovered that certain countries were keen to deepen relations with Israel.“Even leaders of Muslim- majority African nations have expressed their strong interest in restoring relations with the Jewish state – a message we have faithfully conveyed to Israeli officials,” organization officials said.Dr. Jurgen Bühler, executive director of the embassy, said that the destabilization of several central Arab states since 2011 has “reshuffled” the cards in the region, and that the diplomatic bloc of Islamic and Arab countries has begun to crumble.“If you go to West Africa today, senior officials, including Muslim government officials, are telling us ‘we are fed up with Arab leaders, they are racist, they hate black people, they only want to bring jihad to our country,’ and that their natural partner is the State of Israel, which can help develop their countries,” said Bühler.He also said that it was incumbent upon the Israeli government to move quickly to take advantage of the opportunity to develop relations with Africa.Some African capitals have been signaling to Israeli officials a desire to deepen ties for several years, and are frustrated that Jerusalem has not responded faster, according to the organization.“There is a possibility to change voting patterns [in the UN], even from countries who have been against Israel for decades,” said Bühler.Following the approval of the UNESCO resolution on Tuesday, the embassy reiterated its opposition and condemnation of the decision.“The resolution omits the traditional, biblical names of sacred Jewish sites, calling them by alternative Muslim names only,” said the organization to the press.“This is tantamount to rewriting history and stripping these sites of their 4,000 years of Jewish and 2,000 years of Christian connection,” they said. “We are deeply concerned that the wording accepted by an international body intends to eradicate any Jewish and Christian bonds to these holy places.“This represents a calculated insult against the Jewish people, as well as an affront to over two billion Christians worldwide, who know full well that as a faithful Jew, Jesus regularly visited the holy Jewish temple on this site, taught there and called it a ‘house of prayer for all nations,’” they continued.The thousands of Christian pilgrims currently in Israel for the 37th annual celebration of the Feast of Tabernacles come from some 90 nations around the world.Among those present for the event are several dozen pro-Israel Christian parliamentarians and government officials from more than twenty countries, many of whom are affiliated with the Israel Allies Foundation, while several African nations have sent government delegations to represent their countries at this year’s feast.“These are evangelicals who love Israel and are working in their nations back home to build support for the Jewish people,” said Bühler. “This feast will no doubt strengthen their resolve to stand in solidarity with Israel, especially as they interact with like-minded Christians from all over the world.”